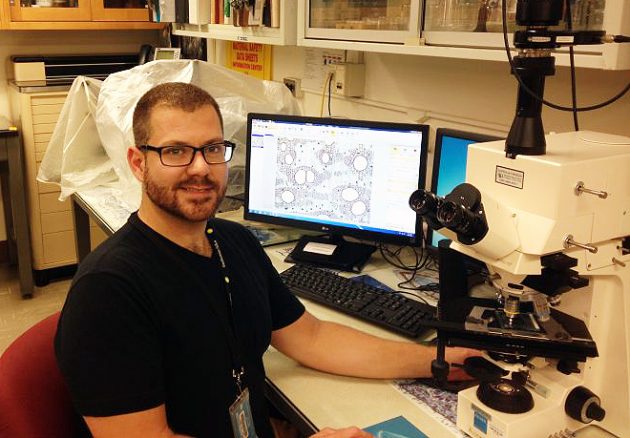 What might lure someone away from the sunny beaches and lush forests of Brazil to the concrete jungle of Washington, D.C.? For wood anatomist Marcelo Pace, it was the Smithsonian.

Pace, a Peter Buck Postdoctoral Fellow at the Smithsonian’s National Museum of Natural History, says the expertise of his sponsor, Smithsonian botanist Pedro Acevedo, and the collections in the Botany Department “come as a perfect match to my project.”

A wood anatomist identifies and analyzes the structural features of wood, including woody vines. While much of science today is focused on biochemistry and molecular biology, Pace says “there is a resurgence of interest in wood anatomy because to understand small components, you must first understand the organisms.” 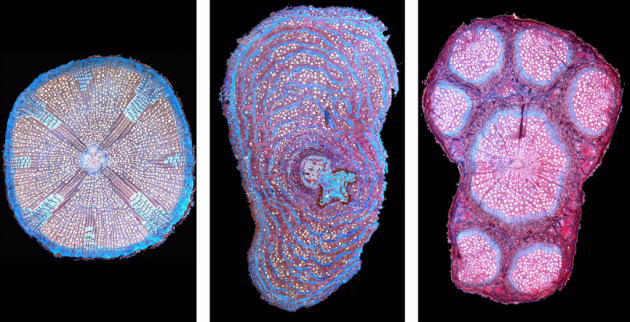 “In the field, I carry a saw and cut small tree sections,” Pace says. They are preserved in alcohol so we can bring them back to the lab for analysis.” With each trip, Pace and his team collect approximately 100 samples that they dissect into super-thin slices.

Pace earned a doctorate in botany from the University of Sao Paulo, Brazil in 2015. His current research includes examining the transition between trees and vines, studying stem structure to learn how vines first evolved and learning how the wood and bark of vines are changing.

Lianas, or woody vines, are unlike trees in that their wood is flexible enough to allow them to wrap themselves around other objects. The thickness of the bark and vascular tissue (xylem and phloem) allow the vines to be non-rigid structures. There is a delicate balance that vines must strike between being rigid enough to carry out functions such as transporting nutrients, and flexible and in some ways delicate enough to wrap around various objects. 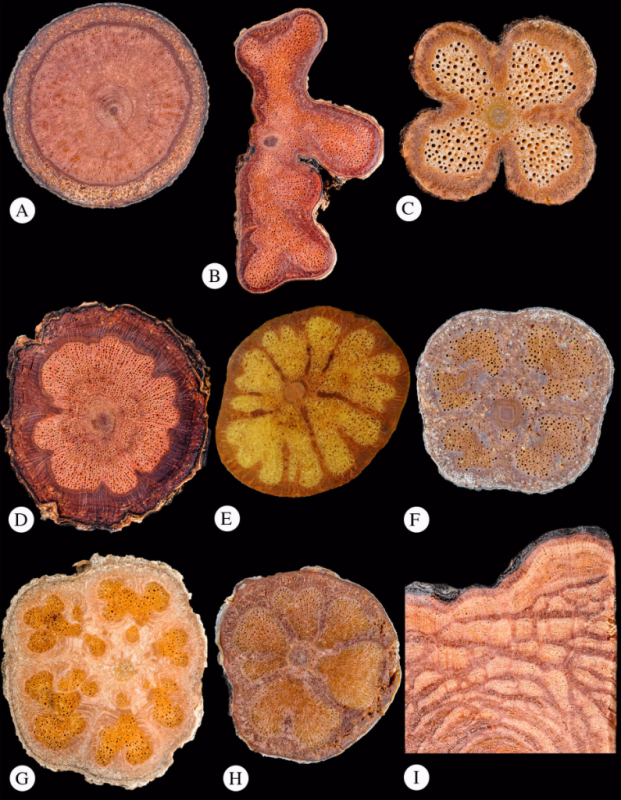 Why study woody vines? Lianas are everywhere, Pace explains. “Lianas can latch on to the bark of a tree, grow upward and cover an entire forest canopy, influencing the ecosystem of the rainforest by competing with its trees for resources.”

This is especially important because as climate changes, the increasing temperatures are causing longer droughts and vines have been shown to perform much better than trees in long drought seasons, Pace says. It is hypothesized that because vines are anatomically different from trees, they have a better ability to store nutrients, such as water. Therefore, there is an increase in vine abundances in the tropics.

When asked about the most challenging part of his research, Pace chuckles and says “time. There is so much that we want to do, but we have to wait a long time for our samples to clear customs and the transportation of samples from the field to the laboratory takes a long time, so we have to plan how we study these samples, taking into account their delivery time.”

On the flip side, the best part of his research, he enthusiastically says is “the wonder of discovery and the research community. It is so great to discover these new things, and there is still much we don’t know. And the community is great. I love that spirit.”

A picture of the first page of Codex Fejérvàry-Mayer (image on left). A representation of the Aztecan cosmos, represented by branches of a cross, which as suggested by Karel Verbeek of the Houtstudiecentrum voor het Technisch Onderwijs, was likely inspired by the cross section of a Bignoniaceae liana stem, as shown in image on the right.. In the center of the picture Xiuhtecuhtli, Lord of Time and Fire, is depicted sending his blood to the four corners of the world (cardinal directions, north is the left side), which would correspond to the four phloem wedges of the Bignoniaceous stem.

In addition to his research on the evolution of woody vines, Pace and Pedro Acevedo are developing a “wood catalog to easily identify wood samples.” Among many of the collections at the Smithsonian is the second largest wood collection in America and one of the largest collections in the world.

“The wood collection is like a library, which people and researchers can use to identify wood samples.” As the wood collection is being digitized, Pace is working with his sponsor, Smithsonian botanist Pedro Acevedo, to develop a website researchers can use to compare unknown wood samples with catalog specimens to streamline the identification process.