New species don’t just spring out of thin air. Speciation, the evolutionary process by which new and distinct species arise, usually takes millions of years. In most cases, scientists can infer how and when a new species evolved through clues found in the fossil record. But what if we could study the moment when a new species starts developing, right as it’s happening?

Oscar Puebla is doing just that.

Puebla, who has a Ph.D. in biology and specializes in Neotropical environments, is a research associate at the Smithsonian Tropical Research Institute in Panama. He’s studying how new species arise by looking at a group of coral reef fish that are genetically very closely related. Smithsonian Insider spoke with Puebla to find out what he has observed among these fish.

Q: Why is it important to study how new species arise?

Puebla: The number of species on the planet is a dynamic balancing act between extinction and speciation or how new species arise. As such, speciation is one of the processes that can counteract the effects of extinction. For obvious reasons, we pay a lot of attention to extinction, but it’s also important to understand speciation, the other side of the coin.

Model systems that illustrate how new species arise—like Darwin’s finches, East African cichlids or the coral fish that I’m studying—have given scientists the opportunity to study the early stages of divergence and have stimulated research that has transformed our understanding of the origins of biodiversity. 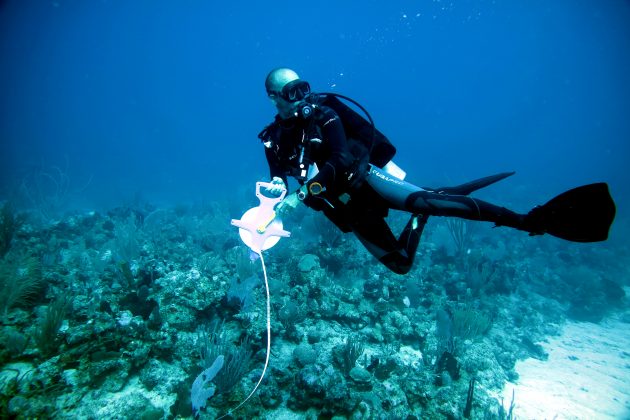 Oscar Puebla studying hamlets in a transect on the outer reef off La Parguera, Puerto Rico. (Photograph by Kosmas Hench)

Q: What species of fish are you researching?

Puebla: I research a group of coral reef fish called hamlets that are found in the Caribbean and the Gulf of Mexico. These fish are interesting for many reasons, one of which is that they are very similar genetically. Different species of hamlet look different (they have different color patterns) and they tend to mate only with members of the same species, yet genetically they are very, very similar.

Most species are well diverged, meaning they are clearly separate from all other species. Trouble is, we don’t know exactly how or when most species diverged because it happened millions of years ago.

In the case of the hamlets, we can see a snapshot of the early stages of divergence right as it’s happening.

Q: Why are the different species of hamlet so genetically similar?

Hamlets usually mate only with members of the same species, yet there are some instances of mating between two different species of hamlet—around 2 percent of the time. Hamlets spawn daily, year-round, so we can make a lot of observations in the wild. As opposed to many other animals whose reproduction only happens during certain times of the month or year.

Q: Why did the hamlet fish, being so genetically similar, diverge in the first place?

Puebla: The classic scenario that leads to divergence is a geographical barrier. When the isthmus of Panama rose about 3 million years ago, it separated the Atlantic and the Pacific oceans. With sufficient time, the populations of fish on either side of the isthmus accumulated mutations due to the different environments and they evolved slightly differently, becoming different species. These fish will not hybridize because they have diverged completely as separate species. It was thought for a long time that a geographical barrier was the only scenario under which new species could emerge. 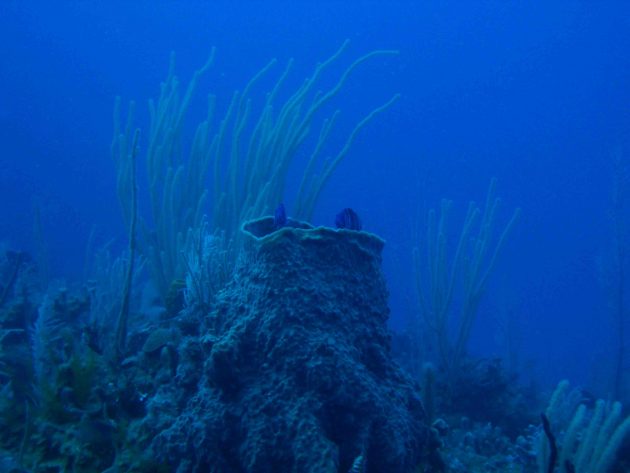 Spawning rendezvous between a pair of hamlets. (Photo courtesy of Oscar Puebla)

Now, think of the marine environment: it’s very open. There aren’t any rivers or mountains that divide populations. Many species have planktonic larvae, meaning they can drift in ocean currents for hundreds of miles, so there’s a higher rate of gene flow than among fresh water and terrestrial habitats. Yet, if you look at a coral reef, the diversity of species is extremely high. So, the question becomes: Is it possible that new species can also arise in the absence of geographic barriers through other scenarios?

In the case of the hamlet, the hypothesis is that two other scenarios are leading to speciation: natural selection and sexual selection.

Q: How would natural selection lead to speciation among hamlet species?

Puebla: Natural selection is the result of some individuals being better than others at acquiring resources and reproducing.

With hamlets, we’ve observed a form of aggressive mimicry that could be leading to divergence. Hamlets are predators that prey on smaller fish and invertebrates. Through aggressive mimicry, the hamlets (the mimics) could have evolved color patterns that look like other herbivorous or omnivorous fish species (the models). It’s the “wolf in sheep’s clothing” trick. It allows hamlets to approach prey without alarm because they look like a harmless herbivore.

Q: What is the role of sexual selection in hamlet speciation?

Puebla: When it comes to the sexual selection hypothesis, hamlets make things very complicated. Sexual selection typically happens when females have a preference for males with certain qualities. However, hamlets are simultaneous hermaphrodites, meaning they are both male and female at the same time. This is quite rare among fish (and vertebrates in general). Only around 40 out of 25,000   species of fish are simultaneous hermaphrodites. 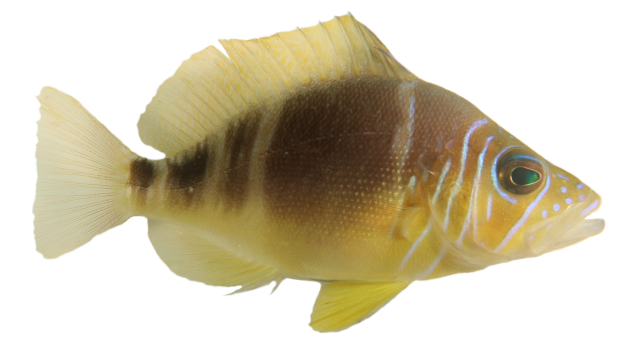 This makes the process of sexual selection very complex because you have the same individuals sometimes displaying as the female and sometimes as the male. They will even mate in both the male and female role in the same day: the fish that displayed as a female will release a few eggs and the other individual will fertilize them and then they switch sexual roles.

Our field observations and theoretical work suggest that this situation creates a strong source of sexual selection that could be contributing to speciation in hamlets.

Q: What have been some of your observations in the field?

Puebla: In the field, we have tagged individuals to study how they display and in what form (male of female). Some pairs are faithful and they meet at the same time in the same spot every day. Some are not. A lot of what happens depends on the social context of the reef. At one point, we observed two individuals of a very rare species of hamlet that demonstrated how context changes everything.

Our naïve expectation was that since they were rare it would be harder for them to find a mate, and this would lead them to try to mate with individuals of a different species. But we found the exact opposite. These two rare individuals actually knew each other and had spawning rendezvous—they would meet at the same spot every night and spawn. Because they didn’t have to compete with other members of their species, they would actually mate more than hamlets of different, more abundant hamlet species.

Six months later we came back to the reef and found now there was a third individual of the same rare species that was a juvenile before but was grown now. This resulted in a love triangle: the three would meet at the same spot every night and have a long process of display to figure out who would mate with whom. Every night, two would end up as the couple and spawn, while the third would be left out. This third individual on several occasions mated with individuals of a different species. We went from a stable pair mating only with each other, to a situation where there was hybridization among species simply by changing the social context of adding a third individual.

That’s the benefit of studying in the field. It presents actual social contexts that can hardly be simulated in the lab.

Q: What are your conclusions so far?

Puebla: We think that the combination of aggressive mimicry and very specific mating system of the hamlets explains why there are so many closely related hamlets species—but there is more to it on the genomic side.

We are currently sequencing the genomes of hamlet species, where we have found a large chromosomal inversion and a few genes that are highly diverged among species. This has led us to develop a third hypothesis to explain the speciation among hamlets, based on their genomic composition. If the genes that determine color patterns and mate choice are found in these inverted chromosomes, for instance, then they are protected from recombination and this could potentially contribute to speciation in the hamlets. We hope to continue learning from their genomes and find clues that help explain the reason for their divergence.