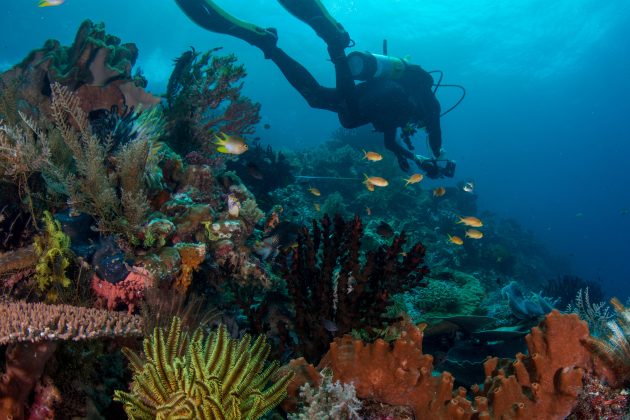 In a recently completed survey of more than 3,000 fish species in 44 countries around the world marine biologists have discovered that communities with a high diversity of fish species are more resilient to rising temperatures and temperature swings, and are more productive.

Armed with a comprehensive global dataset on marine biodiversity involving standardized counts compiled under the Reef Life Survey, researchers tracked how 11 different environmental factors influenced total fish biomass on coral and rocky reefs around the world. Remarkably biodiversity was one of the strongest indicators of ecosystem resilience. Species richness and functional diversity—how fish use their environment—enhance fish biomass and the ability of a fish community to tolerate warm temperatures.

In 2015, Smithsonian MarineGEO scientists teamed with the Reef Life Survey, a global effort to track sea life in coral and rocky reefs. The Reef Life Survey has detected more than 3,000 fish species in 44 countries. This video offers a glimpse of some of the fish they discovered beneath the waters of Panama.

“Biodiversity is not just an aesthetic or spiritual issue—it’s critical to the healthy functioning of ecosystems and the important services they provide to humans, like seafood,” says Emmett Duffy, director of the Tennenbaum Marine Observatories Network and senior scientist at the Smithsonian Environmental Research Center. Duffy is lead author of a study published today in the Proceedings of the National Academy of Sciences, offering strong proof that preserving marine biodiversity benefits the oceans, and with it humans.

The discovery came out of the Reef Life Survey, a global study “based on more than 4,000 underwater surveys,” said co-author Rick Stuart-Smith of the University of Tasmania. The large survey “was only possible with the enthusiastic contributions of highly trained volunteer divers in the Reef Life Survey program, which allowed us to achieve this comprehensive coverage of the world’s reefs, from tropical to polar waters.” 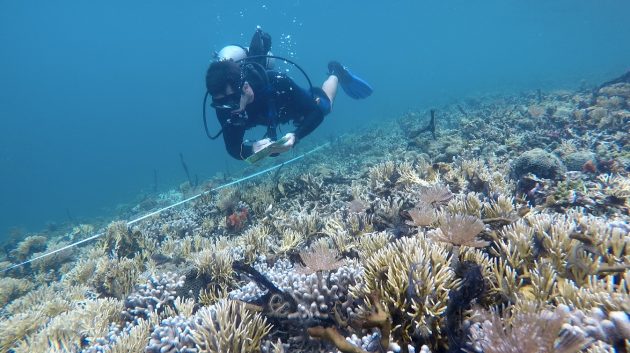 A reef diver surveys fish on a transect in Isla Pastores, on the Caribbean coast of Panama. (Photo by Emmett Duffy)

Warmer ocean temperatures tend to boost fish biomass on average, the scientists found, while wide temperature fluctuations hinder it. Overall, biodiversity made fish communities more resilient to a changing climate. In communities with only a few species, fish biomass tended to increase with rising temperatures until seas warmed above 20 degrees Celsius (68 degrees Fahrenheit)—at which point biomass started to fall. Communities with many species remained stable at these higher temperatures.

Diversity had a similar buffering effect against temperature swings, the researchers found. While both high- and low-diversity communities were less productive under fluctuating temperatures, high-diversity communities suffered half as much as low-diversity ones. Communities with more species are better equipped to handle temperature changes because they have more of their bases covered, the researchers suspect. When temperatures fluctuate, a community with numerous species has better odds that at least a few species can thrive in the new normal. 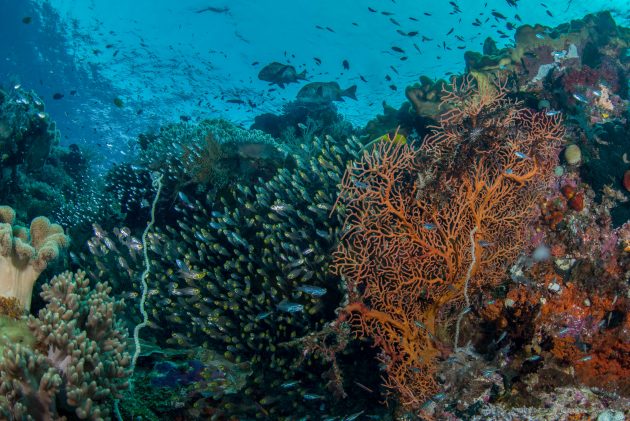 “Biodiversity is paramount to how natural systems work,” says co-author Jonathan Lefcheck of the Virginia Institute of Marine Science. This study “shows that experimental ecologists have in fact been on the right track for 20 years.”

“Preserving local biodiversity is not only an ethical directive with aesthetical and genetic insurance value,” co-author Sergio Navarrete of the Pontifical Catholic University of Chile says. “It is an imperative for human life because of the critical role it plays in providing an essential ecosystem function.”