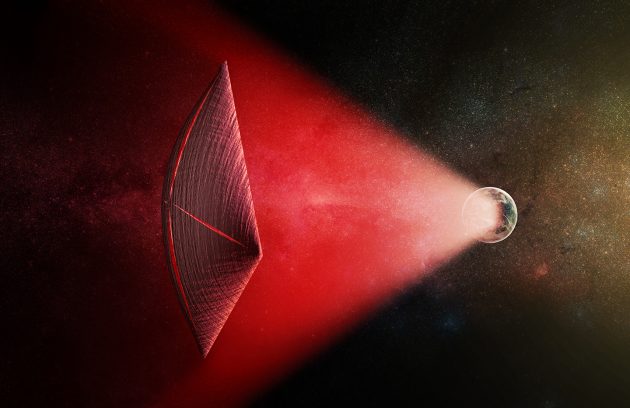 An artist’s illustration of a light-sail powered by a radio beam (red) generated on the surface of a planet. The leakage from such beams as they sweep across the sky would appear as Fast Radio Bursts (FRBs), similar to the new population of sources that was discovered recently at cosmological distances. (Image: M. Weiss/CfA)

The search for extraterrestrial intelligence has looked for many different signs of alien life, from radio broadcasts to laser flashes, without success. However, newly published research suggests that mysterious phenomena called fast radio bursts could be evidence of advanced alien technology. Specifically, these bursts might be leakage from planet-sized transmitters powering interstellar probes in distant galaxies.

“Fast radio bursts are exceedingly bright given their short duration and origin at great distances, and we haven’t identified a possible natural source with any confidence,” said theorist Avi Loeb of the Harvard-Smithsonian Center for Astrophysics. “An artificial origin is worth contemplating and checking.”

As the name implies, fast radio bursts are millisecond-long flashes of radio emission. First discovered in 2007, fewer than two dozen have been detected by gigantic radio telescopes like the Parkes Observatory in Australia or the Arecibo Observatory in Puerto Rico. They are inferred to originate from distant galaxies, billions of light-years away.

Loeb and his co-author Manasvi Lingam (Harvard University) examined the feasibility of creating a radio transmitter strong enough for it to be detectable across such immense distances. They found that, if the transmitter were solar powered, the sunlight falling on an area of a planet twice the size of the Earth would be enough to generate the needed energy. Such a vast construction project is well beyond our technology, but within the realm of possibility according to the laws of physics.

Lingam and Loeb also considered whether such a transmitter would be viable from an engineering perspective, or whether the tremendous energies involved would melt any underlying structure. Again, they found that a water-cooled device twice the size of Earth could withstand the heat.

They then asked, why build such an instrument in the first place? They argue that the most plausible use of such power is driving interstellar light sails. The amount of power involved would be sufficient to push a payload of a million tons, or about 20 times the largest cruise ships on Earth.

To power a light sail, the transmitter would need to focus a beam on it continuously. Observers on Earth would see a brief flash because the sail and its host planet, star and galaxy are all moving relative to us. As a result, the beam sweeps across the sky and only points in our direction for a moment. Repeated appearances of the beam, which were observed but cannot be explained by cataclysmic astrophysical events, might provide important clues about its artificial origin.

Loeb admits that this work is speculative. When asked whether he really believes that any fast radio bursts are due to aliens, he replied, “Science isn’t a matter of belief, it’s a matter of evidence. Deciding what’s likely ahead of time limits the possibilities. It’s worth putting ideas out there and letting the data be the judge.”

The paper reporting this work has been accepted for publication in the Astrophysical Journal Letters and is available online.