Over the vast, empty reaches of interstellar space, countless small molecules tumble quietly though the cold vacuum. Forged in the fusion furnaces of ancient stars and ejected into space when those stars exploded, these lonely molecules account for a significant amount of all the carbon, hydrogen, silicon and other atoms in the universe. In fact, some 20 percent of all the carbon in the universe is thought to exist as some form of interstellar molecule. 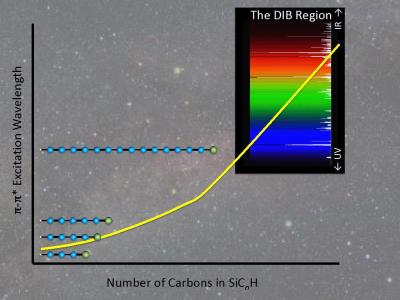 This graph shows absorption wavelength as a function of the number of carbon atoms in the silicon-terminated carbon chains SiC_(2n+1)H, for the extremely strong pi-pi electronic transitions. When the chain contains 13 or more carbon atoms – not significantly longer than carbon chains already known to exist in space – these strong transitions overlap with the spectral region occupied by the elusive diffuse interstellar bands. (Image by D. Kokkin, ASU)

Many astronomers hypothesize that these interstellar molecules are also responsible for an observed phenomenon on Earth known as the “diffuse interstellar bands,” spectrographic proof that something out there in the universe is absorbing certain distinct colors of light from stars before it reaches the Earth. But since we don’t know the exact chemical composition and atomic arrangements of these mysterious molecules, it remains unproven whether they are, in fact, responsible for the diffuse interstellar bands.

Now in a paper appearing in The Journal of Chemical Physics a group of scientists led by researchers at the Harvard-Smithsonian Center for Astrophysics in Cambridge, Mass. has offered a tantalizing new possibility: these mysterious molecules may be silicon-capped hydrocarbons like SiC3H, SiC4H and SiC5H, and they present data and theoretical arguments to back that hypothesis.

At the same time, the group cautions that history has shown that while many possibilities have been proposed as the source of diffuse interstellar bands, none has been proven definitively.

“There have been a number of explanations over the years, and they cover the gamut,” says Michael McCarthy a senior physicist at the Harvard-Smithsonian Center for Astrophysics who led the study.

Molecules in space and how we know they are there 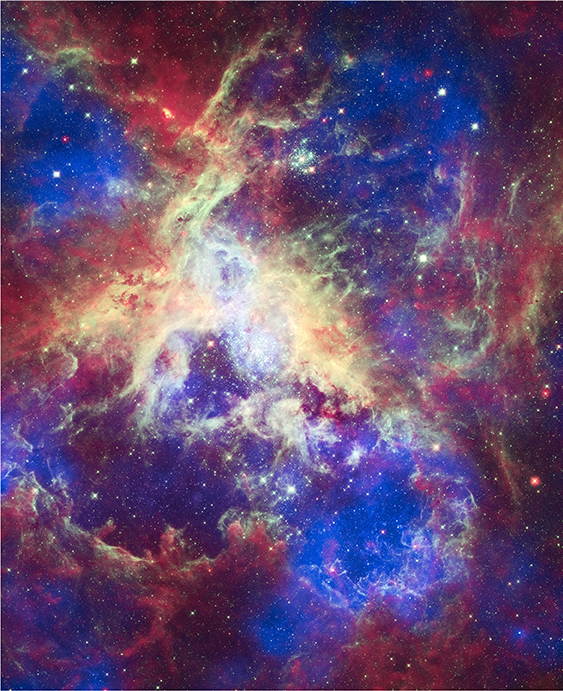 Over the vast, empty reaches of interstellar space, countless small molecules tumble quietly though the cold vacuum. Forged in the fusion furnaces of ancient stars and ejected into space when those stars exploded, these lonely molecules account for a significant amount of all the carbon, hydrogen, silicon and other atoms in the universe. Now a group of scientists led by researchers at the Harvard-Smithsonian Center for Astrophysics suggest these mysterious molecules may be silicon-capped hydrocarbons like SiC3H, SiC4H and SiC5H, and they present data and theoretical arguments to back that hypothesis.

Astronomers have long known that interstellar molecules containing carbon atoms exist and that by their nature they will absorb light shining on them from stars and other luminous bodies. Because of this, a number of scientists have previously proposed that some type of interstellar molecules are the source of diffuse interstellar bands — the hundreds of dark absorption lines seen in color spectrograms taken from Earth.

In showing nothing, these dark bands reveal everything. The missing colors correspond to photons of given wavelengths that were absorbed as they travelled through the vast reaches of space before reaching us. More than that, if these photons were filtered by falling on space-based molecules, the wavelengths reveal the exact energies it took to excite the electronic structures of those absorbing molecules in a defined way.

Armed with that information, scientists here on Earth should be able to use spectroscopy to identify those interstellar molecules — by demonstrating which molecules in the laboratory have the same absorptive “fingerprints.” But despite decades of effort, the identity of the molecules that account for the diffuse interstellar bands remains a mystery. Nobody has been able to reproduce the exact same absorption spectra in laboratories here on Earth.

“Not a single one has been definitively assigned to a specific molecule,” said Neil Reilly, a former postdoctoral fellow at Harvard-Smithsonian Center for Astrophysics and a co-author of the new paper.

Now Reilly, McCarthy and their colleagues are pointing to an unusual set of molecules — silicon-terminated carbon chain radicals — as a possible source of these mysterious bands.

As they report in their new paper, the team first created silicon-containing carbon chains SiC3H, SiC4H and SiC5H in the laboratory using a jet-cooled silane-acetylene discharge. They then analyzed their spectra and carried out theoretical calculations to predict that longer chains in this family might account for some portion of the diffuse interstellar bands.

However, McCarthy cautioned that the work has not yet revealed the smoking gun source of the diffuse interstellar bands. In order to prove that these larger silicon capped hydrocarbon molecules are such a source, more work needs to be done in the laboratory to define the exact types of transitions these molecules undergo, and these would have to be directly related to astronomical observations. But the study provides a tantalizing possibility for finding the elusive source of some of the mystery absorption bands — and it reveals more of the rich molecular diversity of space.

“The interstellar medium is a fascinating environment,” McCarthy said. “Many of the things that are quite abundant there are really unknown on Earth.”–by Jason S. Bardi, American Institute of Physics