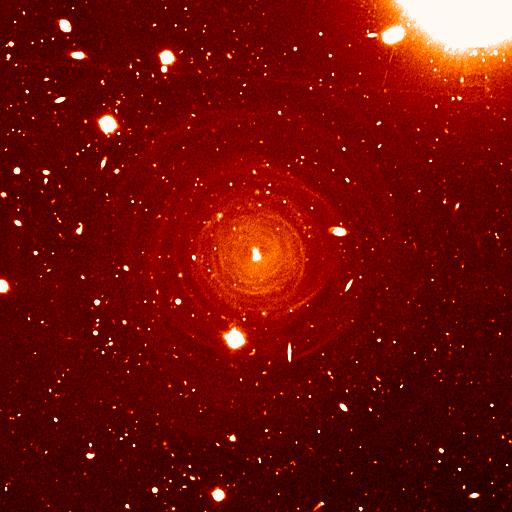 A deep optical image of the carbon star IRC+10216, showing traces of its surrounding envelope. New observations by Smithsonian astronomers have revealed the rich chemistry of this envelope, and found 442 spectral lines from more than 50 molecules. (Credit: Izan Leao; the Very Large Telescope)

Over 170 molecules have been detected in space, from simple diatomic molecules like CO to complex organic molecules with over 70 atoms, such as fullerene. These molecules play a critical role in the development of molecular clouds as they form new stars and planetary systems, and of course in the chemistry that later develops on the surfaces of planets. One of the major issues in modern astronomy is figuring out exactly where all these molecules and associated dust grains came from.

The variable star CW Leo, also known as IRC+10216, is one of the brightest objects in the sky as seen from Earth; it is about 450 light-years away. It shines mostly in the infrared (not optical) because the central star is surrounded by a dense cloud of dust and gas that it ejected in a late stage of its evolution. The dust blocks the optical light and is known to be rich in carbon-bearing molecules. Smithsonian Center for Astrophysics astronomers Nimesh Patel, Ken Young, Carl Gottlieb, Pat Thaddeus, Bob Wilson, Mark Reid, Mike McCarthy, and Eric Keto, together with five colleagues, used the Submillimeter Array to study the spectrum of IRC+10216 across a wavelength band, in an effort to detect and characterize as many molecules in the star’s envelope as possible.

They report finding an amazing 442 spectral lines in their survey, more than 200 of them detected for the first time in any astronomical source. All but 149 can be identified as arising from specific molecules. In addition to measuring the strengths of the lines and the motions of the molecules responsible, the Submillimeter Array survey also obtained images of the star’s nebula in the light of each of these species. The unidentified features, for example, tend to arise from compact regions around the star and probably correspond to hotter states of the known molecules; future work is needed to confirm this conclusion. The new results provide a remarkable view of the rich chemistry around this nearby star, and help to strengthen the conclusion that many complex molecules trace their origin to the envelopes of evolved stars.