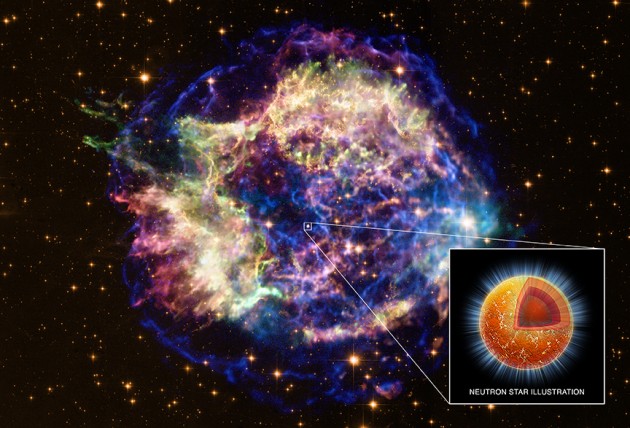 This composite image shows an X-ray and optical view of Cassiopeia A, a supernova remnant in the Milky Way Galaxy about 11,000 light years away. (X-ray: NASA/CXC/ Southampton/W. Ho et al.; Illustration: NASA/CXC/M.Weiss)

NASA’s Chandra X-ray Observatory has discovered the first direct evidence for a superfluid, a bizarre, friction-free state of matter, at the core of a neutron star. Superfluids created in laboratories on Earth exhibit remarkable properties, such as the ability to climb upward and escape airtight containers. The finding has important implications for understanding nuclear interactions in matter at the highest known densities.

Neutron stars contain the densest known matter that is directly observable. One teaspoon of neutron star material weighs six billion tons. The pressure in the star’s core is so high that most of the charged particles, electrons and protons, merge resulting in a star composed mostly of uncharged particles called neutrons.

Two independent research teams studied the supernova remnant Cassiopeia A, the remains of a massive star 11,000 light years away. Chandra data found a rapid decline in the temperature of the ultra-dense neutron star that remained after the supernova, showing that it had cooled by about four percent over a 10-year period.

This Chandra X-ray Observatory video shows the central region of the supernova remnant Cassiopeia A the remains of a massive star that exploded in our galaxy. Evidence for a bizarre superfluid has been found at the core of a neutron star at the center of Cassiopeia A.

“The rapid cooling in Cassiopeia A’s neutron star, seen with Chandra, is the first direct evidence that the cores of these neutron stars are, in fact, made of superfluid and superconducting material,” said Peter Shternin of the Ioffe Institute in St. Petersburg, Russia, leader of a team whose paper was accepted in the journal Monthly Notices of the Royal Astronomical Society. Daniel Patnaude of the Harvard-Smithsonian Center for Astrophysics is one of the paper’s co-authors.

“This drop in temperature, although it sounds small, was really dramatic and surprising to see,” said Dany Page of the National Autonomous University in Mexico, leader of a team with a paper published in the February 25 issue of the journal Physical Review Letters.

Superfluids containing charged particles are also superconductors, meaning they act as perfect electrical conductors and never lose energy. The new results strongly suggest that the remaining protons in the star’s core are in a superfluid state and, because they carry a charge, form a superconductor.

Both teams show that this rapid cooling is explained by the formation of a neutron superfluid in the core of the neutron star within about the last 100 years as seen from Earth. The rapid cooling is expected to continue for a few decades and then slow down.–Chandra X-Ray Observatory Web site