Fifteen years ago, NASA’s Chandra X-ray Observatory was launched into space aboard the Space Shuttle Columbia. Since its deployment on July 23, 1999, Chandra has helped revolutionize our understanding of the universe through its unrivaled X-ray vision.

Chandra, one of NASA’s current “Great Observatories,” along with the Hubble Space Telescope and Spitzer Space Telescope, is specially designed to detect X-ray emission from hot and energetic regions of the universe. 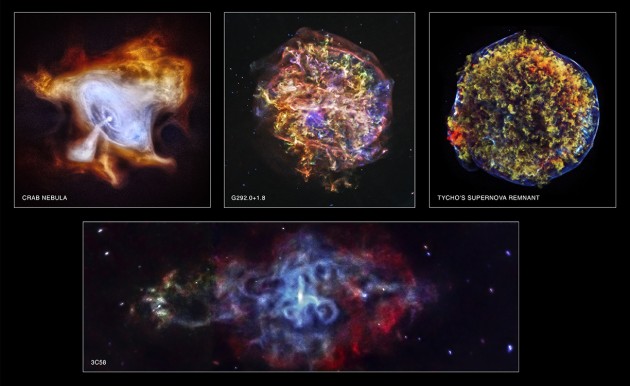 In commemoration of the 15th anniversary of NASA’s Chandra X-ray Observatory, four newly processed images of supernova remnants dramatically illustrate Chandra’s unique ability to explore high-energy processes in the cosmos. The images of the Tycho and G292.0+1.8 supernova remnants show how Chandra can trace the expanding debris of an exploded star and the associated shock waves that rumble through interstellar space at speeds of millions of miles per hour. The images of the Crab Nebula and 3C58 show how extremely dense, rapidly rotating neutron stars produced when a massive star explodes can create clouds of high-energy particles light years across that glow brightly in X-rays. (Image: Chandra X-ray Observatory)

With its superb sensitivity and resolution, Chandra has observed objects ranging from the closest planets and comets to the most distant known quasars. It has imaged the remains of exploded stars, or supernova remnants, observed the region around the supermassive black hole at the center of the Milky Way, and discovered black holes across the universe. Chandra also has made a major advance in the study of dark matter by tracing the separation of dark matter from normal matter in collisions between galaxy clusters. It is also contributing to research on the nature of dark energy.

To celebrate Chandra’s 15th anniversary, four new images of supernova remnants – the Crab Nebula, Tycho, G292.0+1.8, and 3C58 – are being released. These supernova remnants are very hot and energetic and glow brightly in X-ray light, which allows Chandra to capture them in exquisite detail.

“Chandra changed the way we do astronomy. It showed that precision observation of the X-rays from cosmic sources is critical to understanding what is going on,” said Paul Hertz, NASA’s Astrophysics Division director in Washington. “We’re fortunate we’ve had 15 years – so far – to use Chandra to advance our understanding of stars, galaxies, black holes, dark energy, and the origin of the elements necessary for life.”

Chandra orbits far above Earth’s X-ray absorbing atmosphere at an altitude up to 139,000 km (86,500 mi), allowing for long observations unobscured by Earth’s shadow. When it was carried into space in 1999, it was the largest satellite ever launched by the shuttle.

“We are thrilled at how well Chandra continues to perform,” said Belinda Wilkes, director of the Chandra X-ray Center (CXC) in Cambridge, Massachusetts. “The science and operations teams work very hard to ensure that Chandra delivers its astounding results, just as it has for the past decade and a half. We are looking forward to more ground-breaking science over the next decade and beyond.”

Originally called the Advanced X-ray Astrophysics Facility (AXAF), the telescope was first proposed to NASA in 1976. Prior to its launch aboard the shuttle, the observatory was renamed in honor of the late Indian-American Nobel laureate, Subrahmanyan Chandrasekhar. Known to the world as Chandra (which means “moon” or “luminous” in Sanskrit), he was widely regarded as one of the foremost astrophysicists of the 20th century.

“Chandra continues to be one of the most successful missions that NASA has ever flown as measured against any metric – cost, schedule, technical success and, most of all, scientific discoveries,” said Martin Weisskopf, Chandra Project Scientist at the Marshall Space Flight Center in Huntsville, Ala. “It has been a privilege to work on developing and maintaining this scientific powerhouse, and we look forward to many years to come.”

To help celebrate this anniversary, Chandra scientists – including former CXC Director, Harvey Tananbaum – will participate in a Google+ Hangout July 22 beginning at 3 p.m. EDT. For more information on this event, visit:
https://go.nasa.gov/1jXcXYT