Since Galileo first pointed a telescope at the sky 400 years ago, a myriad of technological advances have allowed astronomers to look at very faint objects, very distant objects, and even light that is invisible to the human eye. Yet, one aspect usually remains out of reach – the benefit of a 3D perspective.

Our telescopes show the Milky Way galaxy only as it appears from one vantage point: our solar system. Now, using a simple but powerful technique, a group of astronomers led by Armin Rest of Harvard University has seen an exploding star or supernova from several angles. 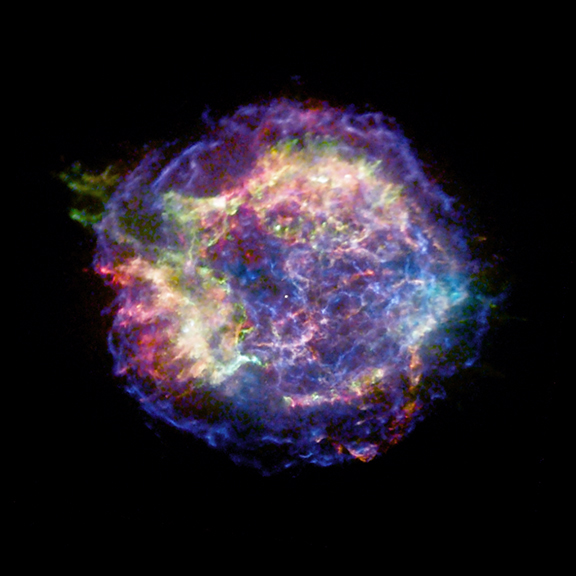 In this Chandra X-ray Observatory image of the supernova remnant Cassiopeia A , the red, green, and blue regions in this image show where the intensity of low, medium, and high-energy X-rays, respectively, is greatest.

“The same event looks different from different places in the Milky Way,” Rest says. “For the first time, we can see a supernova from an alien perspective.”

The supernova left behind the gaseous remnant Cassiopeia A. The supernova’s light washed over the Earth about 330 years ago. But light that took a longer path, reflecting off clouds of interstellar dust, is just now reaching us. This faint, reflected light is what the astronomers have detected. 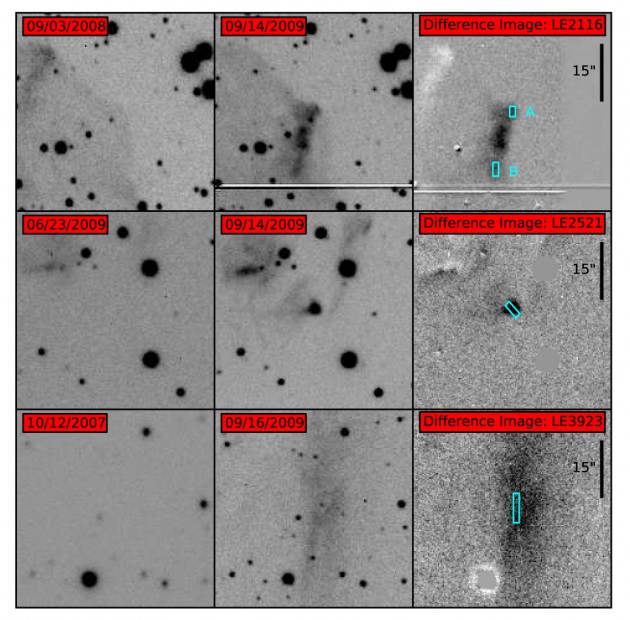 Three light echoes from the  Cassiopeia A supernova are shown here in three rows. For each row, the left panel is a reference image while the middle panel shows the same field of view at a later time. Right panels show the difference between the two previous shots, highlighting the (changing) light echo. The position and size of the spectroscopy slit is indicated by the rectangular overlay. For all images, north is up and east is to the left.

The technique is based on the familiar concept of an echo, but applied to light instead of sound. If you yell, “Echo!” in a cave, sound waves bounce off the walls and reflect back to your ears, creating echoes. Similarly, light from the supernova reflects off interstellar dust to the Earth. The dust cloud acts like a mirror, creating light echoes that come from different directions depending on where the clouds are located.

“Just like mirrors in a changing room show you a clothing outfit from all sides, interstellar dust clouds act like mirrors to show us different sides of the supernova,” Rest explains.

Moreover, an audible echo is delayed since it takes time for the sound waves to bounce around the cave and back. Light echoes also are delayed by the time it takes for light to travel to the dust and reflect back. As a result, light echoing from the supernova can reach us hundreds of years after the supernova itself has faded away.

Not only do light echoes give astronomers a chance to directly study historical supernovae, they also provide a 3-D perspective since each echo comes from a spot with a different view of the explosion.

Most people think a supernova is like a powerful fireworks blast, expanding outward in a round shell that looks the same from every angle. But by studying the light echoes, the team discovered that one direction in particular looked significantly different than the others.

They found signs of gas from the stellar explosion streaming toward one point at a speed almost 9 million miles per hour (2,500 miles per second) faster than any other observed direction.

“This supernova was two-faced!” said Smithsonian co-author and Clay Fellow Ryan Foley. “In one direction the exploding star was blasted to a much higher speed.”

By combining the new light-echo measurements and the movement of the neutron star with X-ray data on the supernova remnant, astronomers have assembled a 3-D perspective, giving them new insight into the Cas A supernova.