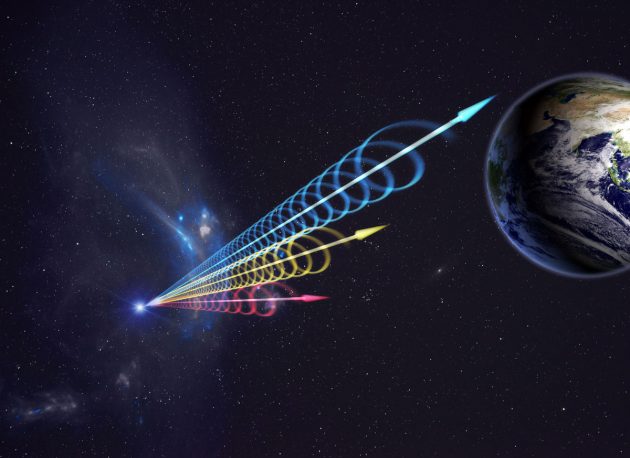 Fast radio bursts (FRBs) are brief spurts of radio emission, lasting just one-thousandth of a second, whose origins are mysterious. Fewer than two dozen have been identified in the past decade using giant radio telescopes such as the 1,000-foot dish in Arecibo, Puerto Rico. Of those, only one has been pinpointed to originate from a galaxy about 3 billion light-years away.

The other known FRBs seem to also come from distant galaxies, but there is no obvious reason that, every once in a while, an FRB wouldn’t occur in our own Milky Way galaxy too. If it did, astronomers suggest that it would be “loud” enough that a global network of cell phones or small radio receivers could “hear” it.

“The search for nearby fast radio bursts offers an opportunity for citizen scientists to help astronomers find and study one of the newest species in the galactic zoo,” says theorist Avi Loeb of the Harvard-Smithsonian Center for Astrophysics (CfA).

Previous FRBs were detected at radio frequencies that match those used by cell phones, Wi-Fi, and similar devices. Consumers could potentially download a free smartphone app that would run in the background, monitoring appropriate frequencies and sending the data to a central processing facility.

“An FRB in the Milky Way, essentially in our own back yard, would wash over the entire planet at once. If thousands of cell phones picked up a radio blip at nearly the same time, that would be a good sign that we’ve found a real event,” explains lead author Dan Maoz of Tel Aviv University.

Finding a Milky Way FRB might require some patience. Based on the few, more distant ones, that have been spotted so far, Maoz and Loeb estimate that a new one might pop off in the Milky Way once every 30 to 1,500 years. However, given that some FRBs are known to burst repeatedly, perhaps for decades or even centuries, there might be one alive in the Milky Way today. If so, success could become a yearly or even weekly event.

A dedicated network of specialized detectors could be even more helpful in the search for a nearby FRB. For as little as $10 each, off-the-shelf devices that plug into the USB port of a laptop or desktop computer can be purchased. If thousands of such detectors were deployed around the world, especially in areas relatively free from Earthly radio interference, then finding a close FRB might just be a matter of time.

This work has been accepted for publication in the Monthly Notices of the Royal Astronomical Society and is available online.