Two separate teams of scientists have identified major challenges for the development of life in what has recently become one of the most famous exoplanet systems, TRAPPIST-1.

The teams, both led by researchers at the Harvard-Smithsonian Center for Astrophysics in Cambridge, Mass., say the behavior of the star in the TRAPPIST-1 system makes it much less likely than generally thought, that planets there could support life.

The TRAPPIST-1 star, a red dwarf, is much fainter and less massive than the Sun. It is rapidly spinning and generates energetic flares of ultraviolet (UV) radiation. 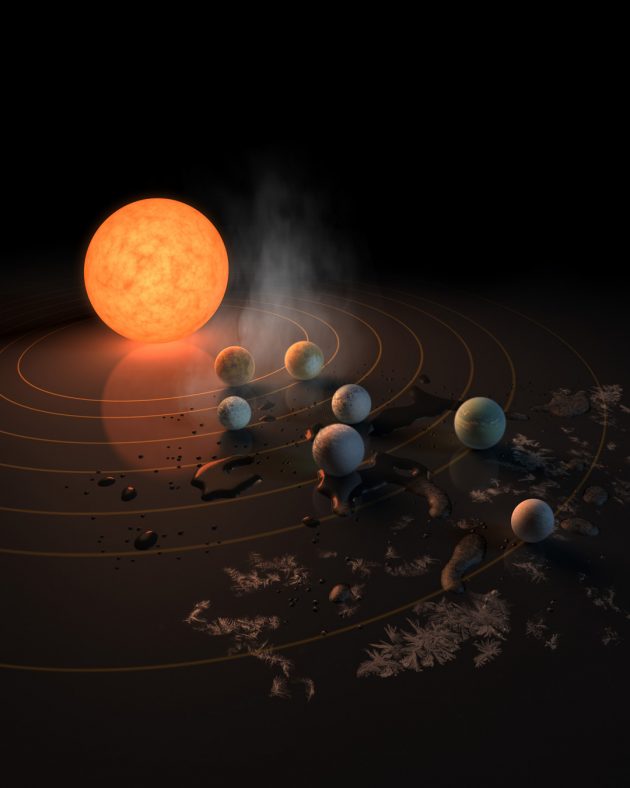 Two separate teams of scientists from theHarvard-Smithsonian Center for Astrophysics have identified major challenges for the development of life in TRAPPIST-1. The TRAPPIST-1 system, depicted here in an artist’s conception, contains seven roughly Earth-sized planets orbiting a red dwarf, which is a faint, low-mass star. This star spins rapidly and generates energetic flares of ultraviolet radiation and a strong wind of particles. The research teams say the behavior of this red dwarf makes it much less likely than generally thought that the three planets orbiting well within the habitable zone could support life. (Image courtesy NASA/JPL-Caltech/R. Hurt)

The first team, a pair of CfA theorists, considered many factors that could affect conditions on the surfaces of planets orbiting red dwarfs. For the TRAPPIST-1 system they looked at how temperature could have an impact on ecology and evolution, plus whether ultraviolet radiation from the central star might erode atmospheres around the seven planets surrounding it. These planets are all much closer to the star than the Earth is to the Sun, and three of them are located well within the habitable zone.

“The concept of a habitable zone is based on planets being in orbits where liquid water could exist,” said Manasvi Lingam, a Harvard researcher who led the study. “This is only one factor, however, in determining whether a planet is hospitable for life.”

Lingam and his co-author, Harvard professor Avi Loeb, found that planets in the TRAPPIST-1 system would be barraged by UV radiation with an intensity far greater than experienced by Earth.

“Because of the onslaught by the star’s radiation, our results suggest the atmosphere on planets in the TRAPPIST-1 system would largely be destroyed,” said Loeb. “This would hurt the chances of life forming or persisting.”

In a separate study, another research team from the CfA and the University of Massachusetts in Lowell found that the star in TRAPPIST-1 poses another threat to life on planets surrounding it. Like the Sun, the red dwarf in TRAPPIST-1 is sending a stream of particles outwards into space. However, the pressure applied by the wind from TRAPPIST-1’s star on its planets is 1,000 to 100,000 times greater than what the solar wind exerts on the Earth.

“The Earth’s magnetic field acts like a shield against the potentially damaging effects of the solar wind,” said Cecilia Garraffo of the CfA, who led the new study. “If Earth were much closer to the Sun and subjected to the onslaught of particles like the TRAPPIST-1 star delivers, our planetary shield would fail pretty quickly.”

While these two studies suggest that the likelihood of life may be lower than previously thought, it does not mean the TRAPPIST-1 system or others with red dwarf stars are devoid of life.

“We’re definitely not saying people should give up searching for life around red dwarf stars,” said Garraffo’s co-author Jeremy Drake, also from CfA. “But our work and the work of our colleagues shows we should also target as many stars as possible that are more like the Sun.”