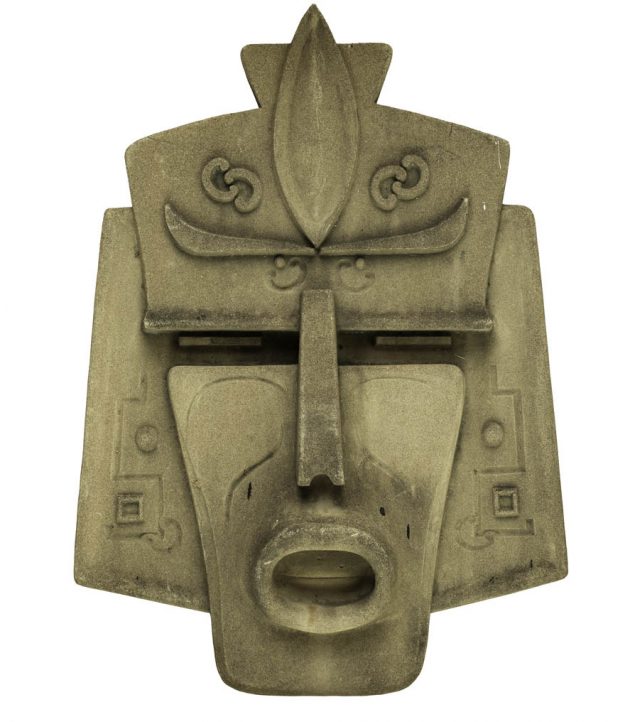 Aztec mask that became the face of KCOR broadcasting in San Antonio, Texas, in 1955. (Courtesy of the Smithsonian’s National Museum of American History)

Spanish-language television—a billion dollar business—has its roots in the 1950s. The earliest stations began broadcasting from Puerto Rico, Texas, and California, at a time when the country’s Hispanic population was about 6.3 million according to 1960 U.S. Census figures. Today, the U.S. Latino population has grown nine-fold, to 55.3 million in 2014.

The Smithsonian’s National Museum of American History has been collecting objects and documents that tell the story of Spanish-language broadcasting in the U.S. Stations that are now part of major national networks like Univision, Telemundo, and others that are publicly and independently owned. The earliest station in the continental U.S. was founded in San Antonio (first under the call letters KCOR-TV and later as KWEX-TV) by broadcasting pioneer Raoul A. Cortez, who saw the promise of television in the 1950s. 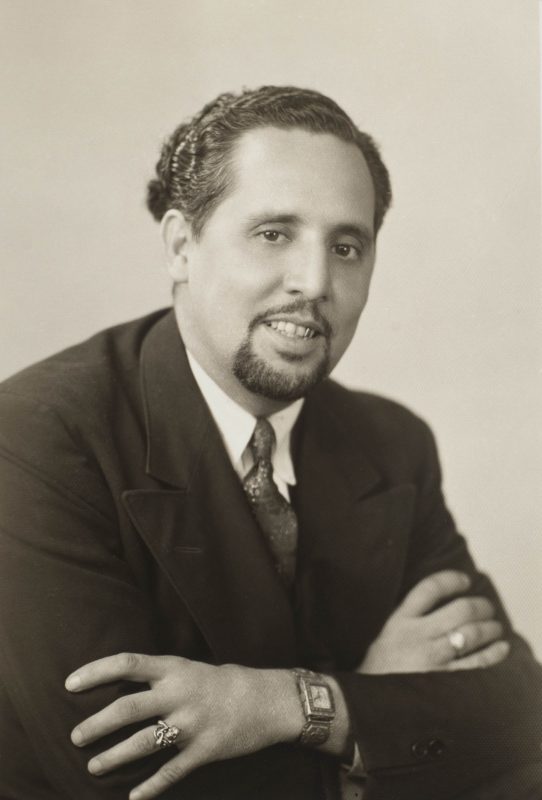 Raoul A. Cortez was a journalist and community advocate who pioneered Spanish-language broadcasting in the U.S. (Courtesy of the National Museum of American History)

Cortez started his professional career as a journalist in the 1930s, working as a reporter for La Prensa, a Spanish-language newspaper in San Antonio. He was passionate about Mexican American issues and advocated for civil rights and equality, serving as president of the League of United Latin American Citizens (LULAC).

“In the early 1940s, Cortez decided to launch a new, Spanish-language radio station,” says Kathleen Franz, chair and curator of the Division of Work and Industry at the National Museum of American History. “Up until then, his experience in broadcasting had been limited to purchasing airtime on English-language stations and airing programming in Spanish. He decided he wanted to open a station so he could broadcast Spanish-language programming all day, every day.” 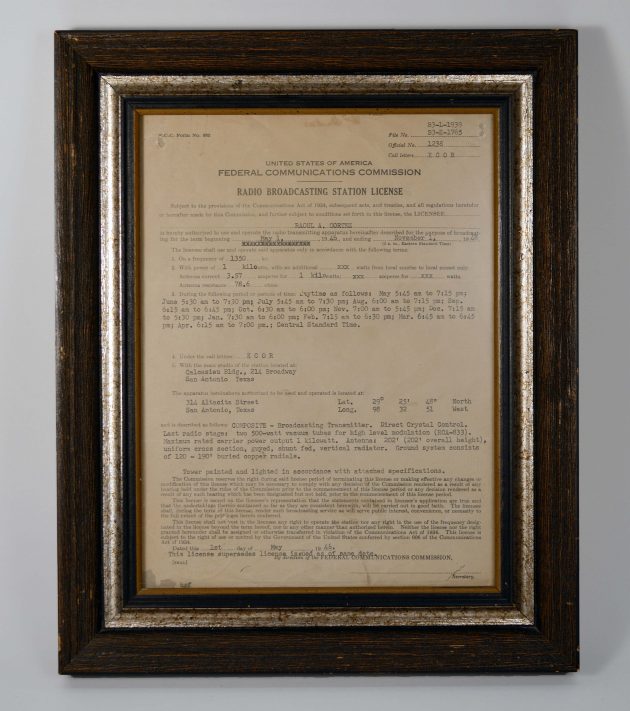 This was easier said than done. During World War II, the U.S. Federal Communications Commission (FCC) had stopped giving broadcasting licenses for new radio or TV stations, out of a fear that non-English programming could be spreading anti-American propaganda. After the war, the FCC began giving licenses again and Cortez was among the first in line.

In 1946, with his new FCC license in hand, Cortez launched KCOR 1350 AM. Being on an AM frequency meant the station had a wide reach. Cortez got to work, bringing talent from Mexico and South Texas to play live music on the air. Programming also focused on sharing the Mexican community’s challenges and triumphs, through call-in shows and advice programs. 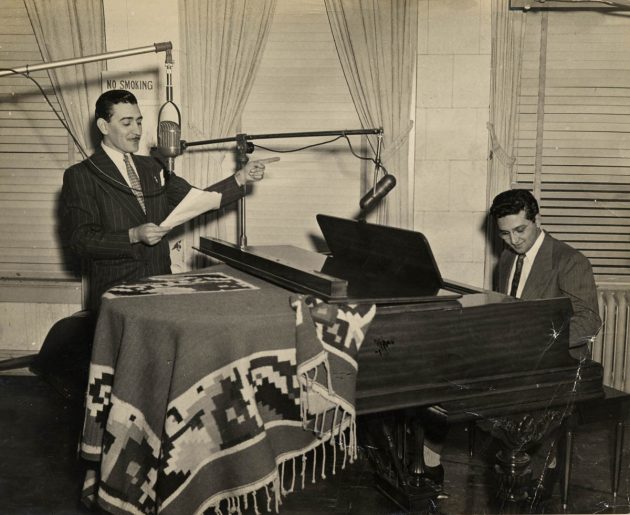 Renowned entertainer Leonardo “Lalo” Garcia Astol was a Tejano performer who worked as an announcer at KCOR, creating variety shows and radio novellas for the station. (Courtesy of the National Museum of American History)

“Cortez’s commitment to the community carried over to KCOR,” Franz says.

The radio station has been on the air since then: still broadcasting in Spanish only, under the same call letters, on the 1350 AM frequency. It broadcasts programming by Univision radio.

“The radio station proved successful, but Cortez always had his eye on the next big thing,” Franz says. In the 1950s, the “next big thing” was television. “He was an entrepreneur who saw the promise of television. In that moment, Cortez began lobbying for a license to launch a new television station.” 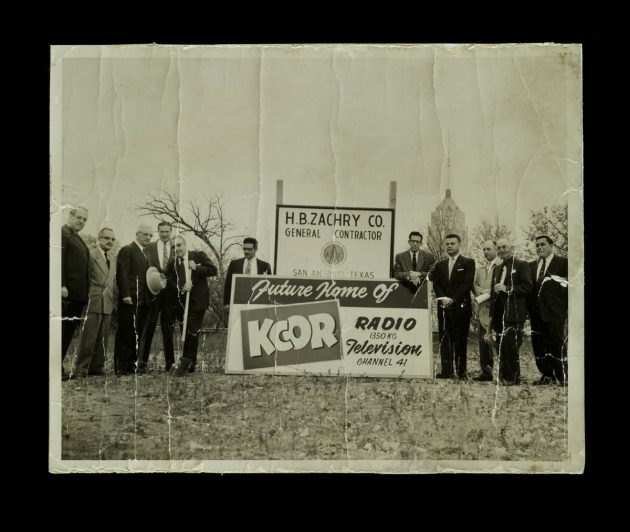 Groundbreaking for the KCOR-TV studio and antenna in San Antonio, Texas. The KCOR antenna became a landmark, one of the tallest structures in San Antonio. (Courtesy of the National Museum of American History)

After years of lobbying, Cortez finally got the license in 1955. On June 10, 1955, he launched KCOR-TV, the first Spanish-language TV station in the continental U.S.

“Cortez opened his new TV station, but he is faced with several challenges,” Franz continues. “When the FCC reopened space for new television stations, it put them at the upper end of the dial, on the ultra-high frequency (UHF)—channel 41, in the case of KCOR-TV. Getting to that channel required a converter box. Cortez had to work hard to encourage people to buy a converter to watch the channel.” 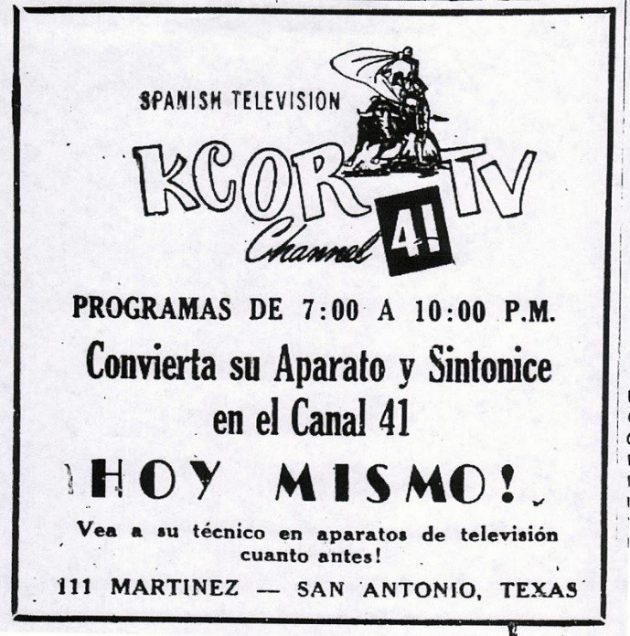 Advertisement encouraging people to ask their TV technicians to convert their TV sets so they can watch KCOR-TV Channel 41, which offered Spanish-language programming from 7:00 to 10:00 p.m. (Courtesy of the National Museum of American History)

When it first launched, KCOR-TV did not broadcast all day. It only broadcast in the evening, from 7:00 to 10:00 p.m. Slowly but surely, Cortez found sponsors who saw the value of advertising to the Hispanic community, and the station reached all-day broadcasting.

“It’s incredible that the station did as well as it did, despite all the barriers it had to face,” Franz reflects. “Cortez once again carried his commitment to the community into the programming, offering community shows that answered common questions, like how to obtain a social security number or even assisting community members in finding a job.” 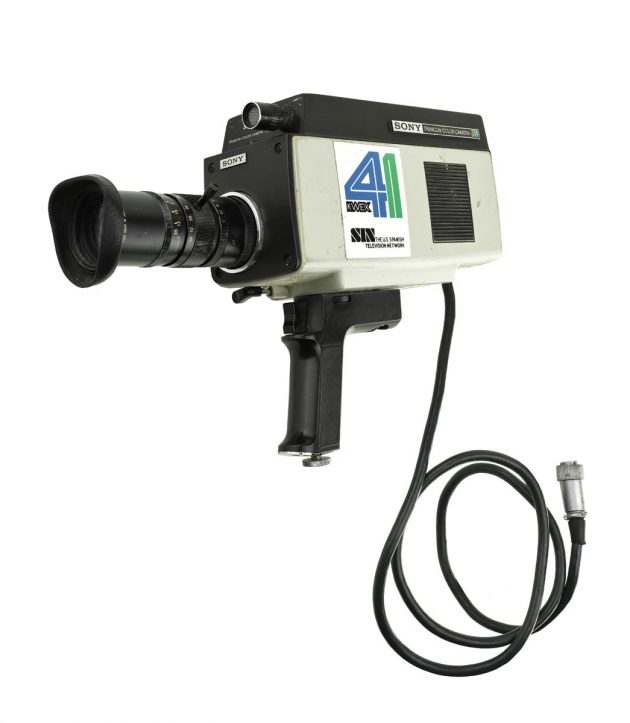 KCOR-TV attracted investors who had ties to Mexico’s Televisa and who wanted to transform the station into a full-fledged TV network. In 1961, Cortez’s son-in-law Emilio Nicolas Sr. and a group of investors bought the station and changed the letters to KWEX-TV. Soon after they opened KMEX-TV in Los Angeles, and a few years later launched the Spanish International Network (SIN), an affiliate network of Spanish-language TV stations.

“SIN’s reach spread quickly, first through the Southwest and eventually in Chicago and New York City,” Franz says. In 1987, Hallmark Cards bought the network and rebranded it as Univision. The Univision network has local stations in more than 60 markets with large Hispanic populations, which offer local programming and network shows.

“Despite the changes in ownership, the local stations, such as KWEX, were run by dedicated staff who spent their whole careers serving the local Spanish-speaking communities,” Franz says.