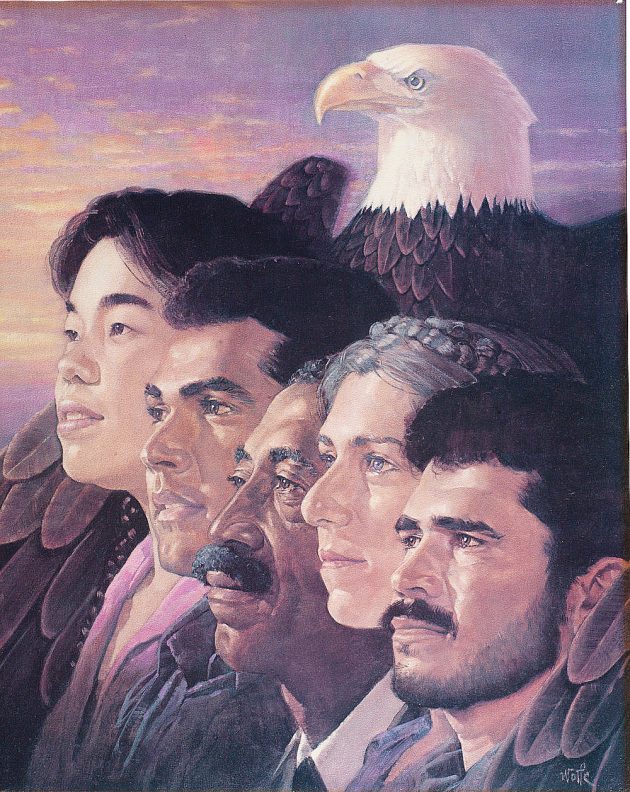 La Agencia de Orcí­ created this painting as the centerpiece of an Immigration and Naturalization Service legalization campaign in 1986 to encourage immigrants in the U.S. illegally to sign up for Ronald Reagan’s amnesty program. The campaign helped in the legalization of 3.1 million eligible immigrants. (All images Courtesy National Museum of American History)

The Smithsonian’s National Museum of American History is home to some of the earliest examples of American advertising, dating all the way back to the 19th century.

Fast forward 100 years and you find yourself in the world of television’s “Mad Men” and the “post-war” ad industry. More than men in sharp suits sipping martinis, the 1960s advertising world also marked the beginning of Hispanic advertising in the U.S.

Thanks to Kathleen Franz, curator of business history at the National Museum of American History, the collections of the American History Museum has a large component devoted to the boom of Hispanic advertising that started in the 1960s and continues today.

“After looking through the museum’s advertising collections I noticed there was little about Hispanic advertising. I knew it was a gap we needed to close so I started reaching out to advertisers who have been on the ground floor of that industry since the beginning,” Franz explains. “This led to collecting objects that would tell the story of Hispanic advertising in the U.S.” 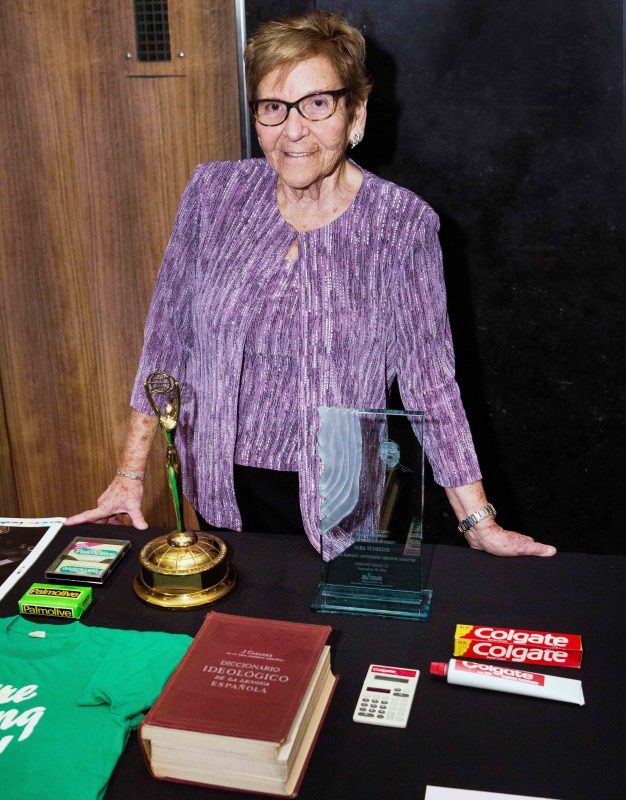 Sara Sunshine received the first Clio awarded to a Hispanic Agency in 1987.

Among these objects is Sara Sunshine’s 1987 Clio Award, the first-ever given for Hispanic advertising. The Clio Award recognizes innovation and creativity in advertising, design and communication.

In 1962, Sunshine worked at Spanish Advertising and Marketing Services, the first recognized full service Hispanic advertising agency in the United States. Her approach was very hands-on, finding out what the community really wanted. She conducted market research by visiting bodegas around New York, talking to the owners and customers to figure out shopping trends.

“The boom of Hispanic advertising also saw more women- and family-owned agencies than in the general market,” Franz recalls. 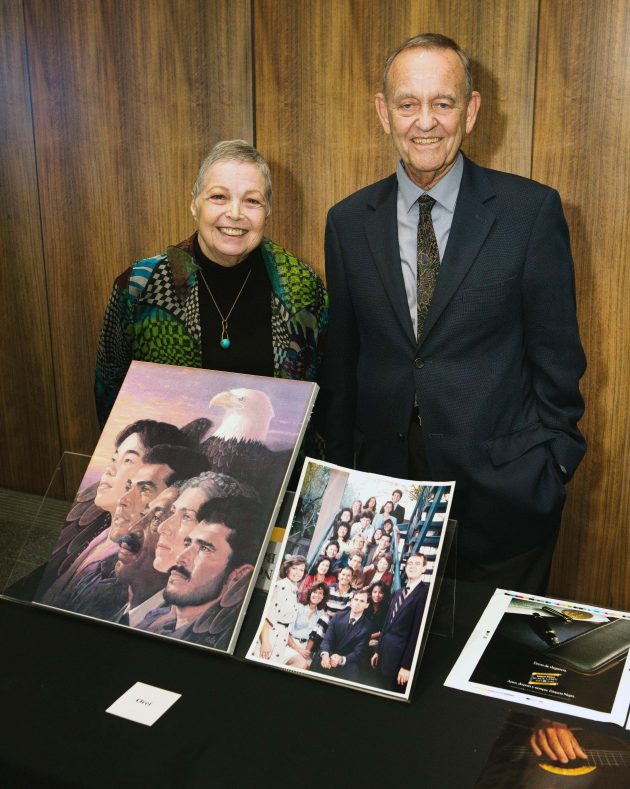 Like husband and wife Hector and Norma Orcí, started their agency 30 years ago to reach Latinos in ways that general advertising was not. The agency went beyond product advertising to address important issues in the community, a central characteristic among Hispanic agencies.

“In the 1980s the U.S. Immigration and Naturalization Service offered an amnesty period for immigrants with work visas to apply for U.S. citizenship. Two years after launching, the application deadline was fast approaching but very few people had signed up,” Franz says.

The Orcís created an advertising campaign for the INS meant to encourage people to register. The campaign included posters and TV spots that resonated with the immigrant community.

“Approximately 6 out of the 8 million immigrants who qualified for amnesty had signed up by the end of the campaign,” Franz says.

“Community advocacy is a cornerstone of the U.S. Hispanic advertising world, with many agencies developing campaigns to help the Latino community understand things that they were not getting through the general media,” Franz says. 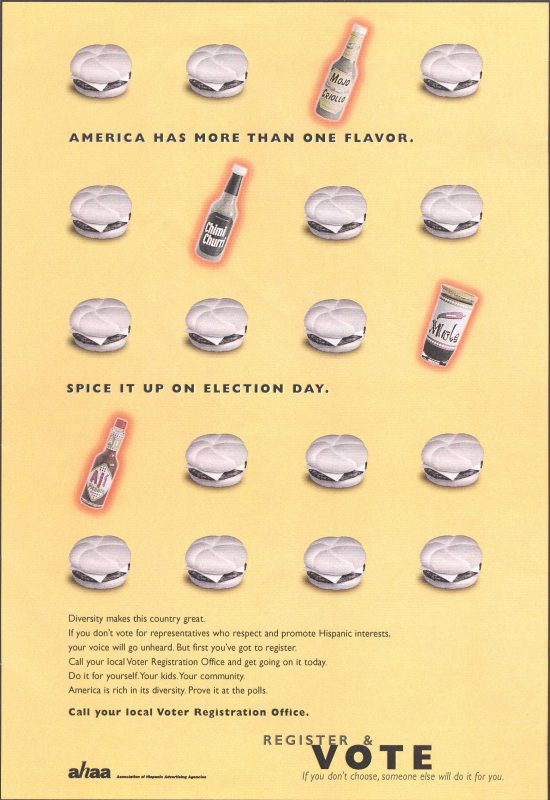 The Hispanic advertising collection at the American History Museum also includes the Voto (vote) campaign, which ran prior to the 2000 presidential election. The campaign encouraged Latinos to register to vote and make their voice count. It was the first time all the members of the Association of Hispanic Advertising Agencies (AHAA) worked together on a campaign.

“AHAA member agencies participated in the design competition for the Voto campaign, and the winner resonated by blending humor with the very important issue of voter registration,” Franz says.

The idea of developing a voter registration campaign was the brainchild of Al Aguilar, one of the founders of Sosa, Bromley, Aguilar & Associates, an advertising agency that became the top billing Latino agency in the industry and led the way during a second wave of Hispanic advertising in the 1980s.

“Sosa, Bromley, Aguilar & Associates was one of the agencies that paved the way for bilingual and cultural advertising, rather than just Spanish-language advertising,” Franz says. “When it came time to kick off this collecting initiative, I reached out to Lionel Sosa, another founder. I didn’t think he’d answer the phone but he did and immediately invited me down to San Antonio to discuss.”

Sosa and the other principals of the now defunct Sosa, Bromley, Aguilar & Associates helped guide Franz’s research and collecting efforts. Providing information on what to collect and additional significant Hispanic advertising firms.

“We collected all of the TV and radio commercials made by Sosa, Bromley, Aguilar & Associates, including the first-ever Spanish-language TV commercial to air during the American Music Awards for Coca-Cola,” Franz says.

The growing collection includes the creative final products, as well as the stories behind them—marketing models, focus group results, storyboards and other raw, working aspects of their advertising campaigns.

“The collection really changes our perspective on the advertising industry in this critical period of civil rights for Latinos in the U.S. It wasn’t just what you see in “Mad Men.” There was this growing wave of Hispanic advertising that takes off in the number of agencies and the billing amounts,” Franz says.