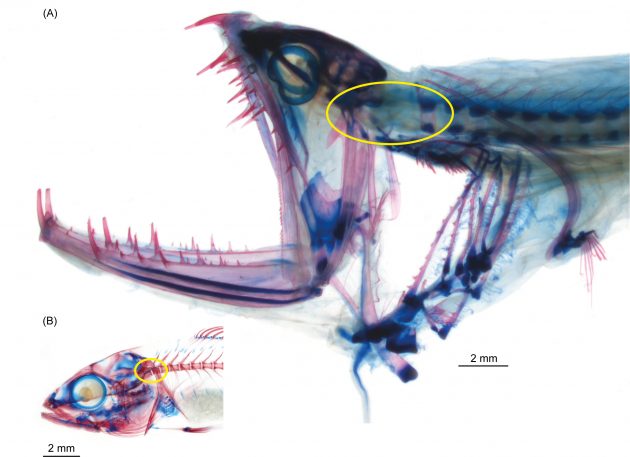 This image shows the skeleton and anatomy of a barbeled dragonfish with a true functional head joint (A) in contrast to the relatively inflexible connection usually found in fishes (e.g., a young Mediterranean sea bass (B). The bone is stained red and cartilage is stained blue. (Image courtesy Nalani Schnell, Muséum national d’Histoire naturelle)

Food is scarce in the deep, dark regions of the ocean where barbeled dragonfishes and their relatives dwell. Known as the Stomiidae, some of these snake-like fishes with long sharp teeth “are lie-in-wait ambush predators and do not waste energy swimming around in darkness to find their prey,” explains Dave Johnson, an ichthyologist at the Smithsonian’s National Museum of Natural History. “That’s a great advantage.”

A second beneficial adaption is an ability to open their mouths wide enough to swallow other fish nearly as large as themselves. “This isn’t to say they only eat large prey,” Johnson adds, “but where prey is not that common,” it is to their advantage to be able to eat whatever may come along, no matter how big.

Now Johnson and Nalani Schnell from the Muséum national d’Histoire naturelle in Paris, have just described a previously unknown functional head-notochordal joint in some dragonfishes that occupies the exact spot where their brain case should connect with their spine. In all other fish the skull and vertebral column are closely connected.

This flexible joint allows some dragonfishes to greatly extend the reach of their mouth gape and exhibit incredible maneuverability and elevation of the head. In a paper published today in the journal PLOS ONE, Johnson and Schnell describe this newly discovered joint and examine how the anatomy of the gap between the skull and ossified vertebral column varies across a range of stomiid species.

“It turns out that this gap has evolved in different ways in different genera of the dragon fishes,” Johnson says. “In some cases there is just a gap where the first vertebrae is just removed from the back of the brain case. In other cases some vertebrae are actually lost and in five genera (groups) the flexible gap has developed a functional joint.”

In their paper Schnell and Johnson illustrate how this joint has been gradually refined so that, as Johnson explains, in its most advanced form the strong, flexible notochord folds inward and envelops the back of the braincase with a sheath when the fish’s head is at rest with mouth closed. When the fish opens its mouth to engulf prey the ventral inward folded sheath of the notochord telescopes outward and straightens.

“As a consequence, the cranium can be pulled up and back significantly farther than in all other teleost taxa that lack such a functional head joint and thereby can reach mouth gapes up to 120 degrees,” the scientists report. 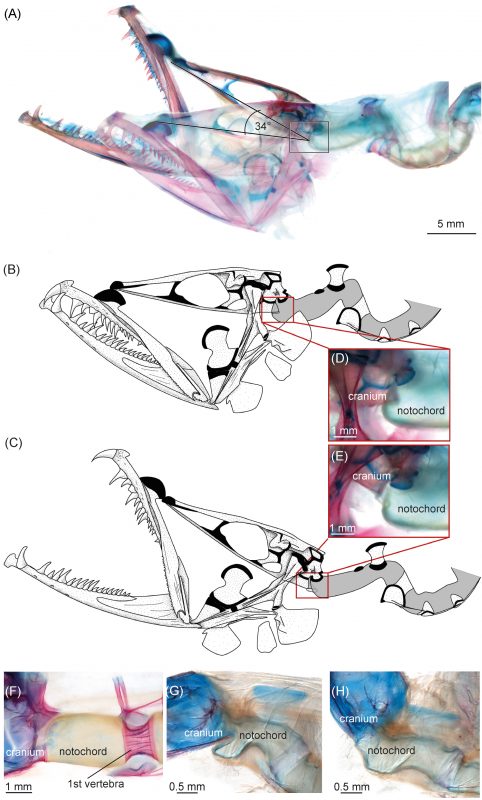 These illustrations and photos of a stained specimen show the head of a barbeled dragonfish in “resting position” (mouth closed—A, B, D, G) and as it opens its mouth completely (mouth open—A, C, E, H), showing the functional head joint (D, E). In more primitive members of the family, the flexible part of the vertebral column (notochord) forms a simple, straight connection between the head and the first ossified vertebra (F). (Image courtesy Nalani Schnell, Muséum national d’Histoire naturelle)

To study the physical structure of the notochord in different species of Stomiidae, Johnson and Schnell used the chemical trypsin to dissolve the muscle tissue in a number of specimens and then stained the cartilage blue, and bones red. The specimens were next placed in glycerine, rendering the remaining tissue clear. This method is critical to observe the articulation of the bones and cartilage and how they function as the specimen is moved.

Due to earlier research “we’ve known that gap was there for a while,” Johnson says, “but we didn’t know much about it. Our first step was to understand how it was configured, which vertebrae are involved and so forth, and that led to seeing that some dragonfishes have this functioning hinge-like joint.”

The authors also demonstrate how the presence and various refinements of the head-joint complex may help elucidate the evolutionary relationships among the Stomiidae. “The next step will be to investigate the musculature that helps to elevate the head and return it to its original position,” Johnson says. 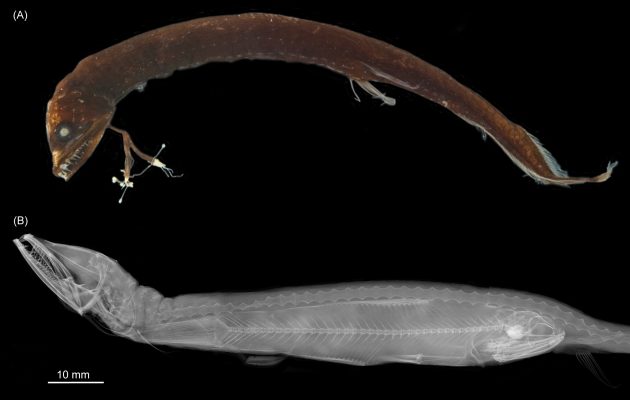 The photo and the x-ray image show the external and internal morphology of a barbeled dragonfish that lives in the deep sea and attracts prey with its luminescent chin barbel. The x-ray image shows a barbeled dragonfish that has eaten a large lanternfish whole. This and other stomach content analyses support the hypothesis that the functional head joint reinforces the maneuverability of the head in order to ingest large prey whole. (Image by Nalani Schnell, Muséum national d’Histoire naturelle)