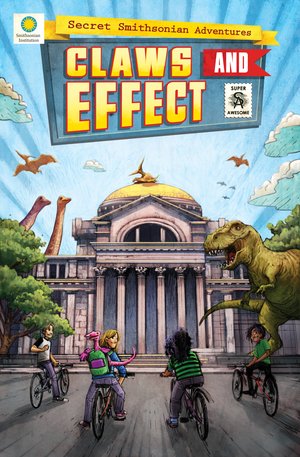 This Secret Smithsonian Adventures series follows four middle schoolers as they foil events by two dastardly doers who try to dangerously change the true course of history. Armed with science and helped by famous historical figures the intrepid crew step back in time to thwart the nefarious culprits and neutralize the events to save history.

In the first of the series, Wrong Wrights, the students Dominique, Eric, Josephine, and Ajay are locked in a struggle with history at the Air and Space Museum that has been altered by the sinister Barris brothers. Returning home from the first adventure, the students immediately discover another change of events conundrum engineered by the same foes as in the first series.

Claws and Effect opens with Dominique, Eric, Josephine, and Ajay traveling to the Smithsonian’ National Museum of Natural History. They are shocked to learn all the world’s animals are missing and in their place are extinct dinosaurs. The quick-witted students pick up a trail at the National Museum of Natural History that has been mysteriously changed to the Museum of Extinction. Time traveling to 1858 when the American bone hunter William Foulke discovered the first almost complete dinosaur, the kids–helped by inventor Alexander Graham Bell, Foulke, and the suffragette reporter Nelly Bly in her middle school days–restore the world’s animals after besting the nefarious Barris brothers yet again. The intrepid quartet, return to the present time and are confronted with a curious prelude of yet another mystery, the subject of the third book in the series.

Claws and Effect explores paleontology and history through the imagery of time travel. It places events, great and famous people into the mix, giving the reader a glimpse into past milestones. Graphics and color complement the humor and action of the mystery. Authors and illustrator succeed in adding a spoonful of sugar to the medicine of learning.

Steve Hockensmith is the New York Times-bestselling author or co-author of 10 books, most recently the Nick and Tesla series of middle-grade mysteries. Chris Kientz is the writer and producer of the international award-winning Smithsonian Channel television production “Raven Tales.” Lee Nielsen is an animator, illustrator, concept artist and designer.