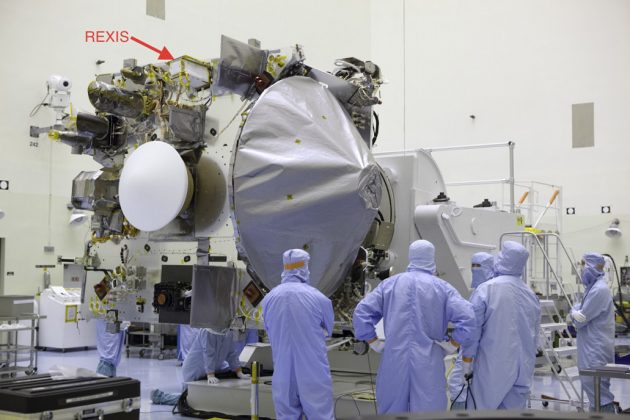 A photograph of the OSIRIS-REx spacecraft prior to installation of thermal blankets. The REXIS instrument is labelled. (Image courtesy NASA)

At 7:05 pm (EDT), Thursday, Sept. 8, NASA plans to launch a spacecraft to a near-Earth asteroid named Bennu. Among that spacecraft’s five instruments is a student experiment that will use X-rays to help determine Bennu’s surface composition.

The Regolith X-Ray Imaging Spectrometer, or REXIS, was developed by researchers and students at the Harvard-Smithsonian Center for Astrophysics (CfA) and the Massachusetts Institute of Technology (MIT), both in Cambridge, Mass. It is only the second student experiment to fly on a NASA interplanetary mission.

The mission, called the Origins, Spectral Interpretation, Resource Identification, Security-Regolith Explorer (OSIRIS-REx), will be launched with an Atlas V from Cape Canaveral, Florida. After its two-year journey to Bennu, the spacecraft will spend nearly two years making observations and measurements before collecting a surface sample and returning it to Earth.

REXIS will help the mission team select the sample site by characterizing the asteroid’s surface. Bennu emits X-rays through a process known as fluorescence, in which X-rays from the Sun make atoms on the asteroid”s surface glow at specific energies, depending on which chemical elements are present.

The asteroid Bennu is about 1,600 feet across, about twice the height of Boston’s John Hancock Tower. REXIS will be able to resolve details about 18 feet across.

Like many asteroids, Bennu represents a relic from the solar system’s formation. It formed as bits of primitive material stuck together over time. As a result, it can tell scientists about the history of our solar system. Asteroids like Bennu may have delivered water, carbon, and other substances crucial to life to the early Earth.

REXIS is a $5 million project that involved nearly 50 undergraduate students from MIT and Harvard.

The OSIRIS-REx mission is being led by the University of Arizona under principal investigator Dante Lauretta. NASA’s Goddard Space Flight Center in Greenbelt, Maryland is managing the mission.