Long ago, one great ocean flowed between North and South America. When the narrow Isthmus of Panama joined the continents about 3 million years ago, it also separated the Atlantic from the Pacific Ocean. If this took place millions of years earlier, as recently asserted by some, the implications for both land and sea life would be revolutionary. Aaron O’Dea, staff scientist at the Smithsonian Tropical Research Institute (STRI), and colleagues writing in Science Advances firmly set the date at 2.8 million years ago.

“Recent scientific publications proposing the isolation of the two oceans between 23 to 6 million years ago rocked the generally held model of the continental connection to its foundations,” said Jeremy Jackson, emeritus staff scientist at the Smithsonian. “O’Dea and his team set out to reevaluate in unprecedented, rigorous detail, all of the available lines of evidence—geologic, oceanographic, genetic and ecological data and the analyses that bear on the question of when the Isthmus formed.”

“The timing of the connection between continents and the isolation of the Pacific and Atlantic oceans is important for so many reasons,” O’Dea said. “Estimates of rates of evolutionary change, models of global oceans, the origin of modern-day animals and plants of the Americas and why Caribbean reefs became established all depend upon knowing how and when the isthmus formed.” 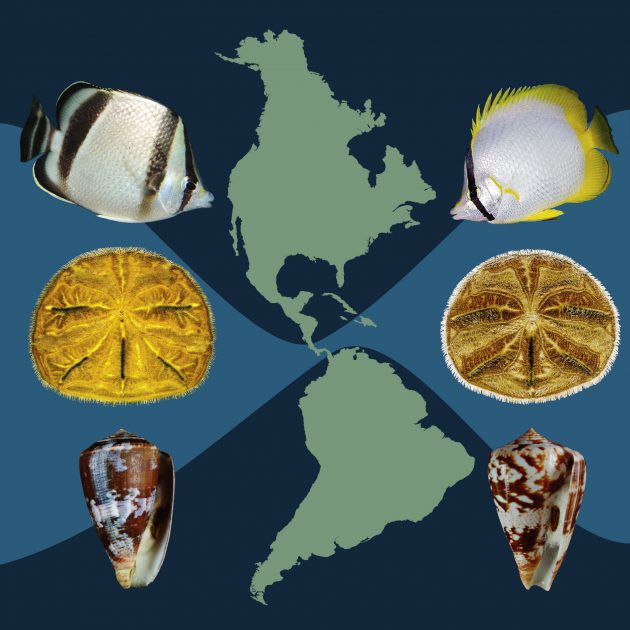 Split by the Isthmus of Panama: Species of butterfly fish, sand dollar and cone snail that today live on the Pacific and Caribbean coasts of Central America are very closely related. Genetic sequencing shows that only 4 to 3 million years ago, each pair was a single species, demonstrating that marine connections between the oceans must have existed until that time. (Image courtesy Simon Coppard, Alexander Medvedev, Ross Robertson, Shellnut, Bob Fenner)

The team of researchers from 23 institutions, including nine current or emeritus staff scientists from STRI and the Smithsonian’s National Museum of Natural History and 13 current or previous Smithsonian post-doctoral fellows concluded that records from marine and terrestrial fossils, volcanic and marine rocks and the genes of marine animals split by the formation of the Isthmus all tell the same story.

The study used three key pieces of evidence defined when the land bridge was finally in place: 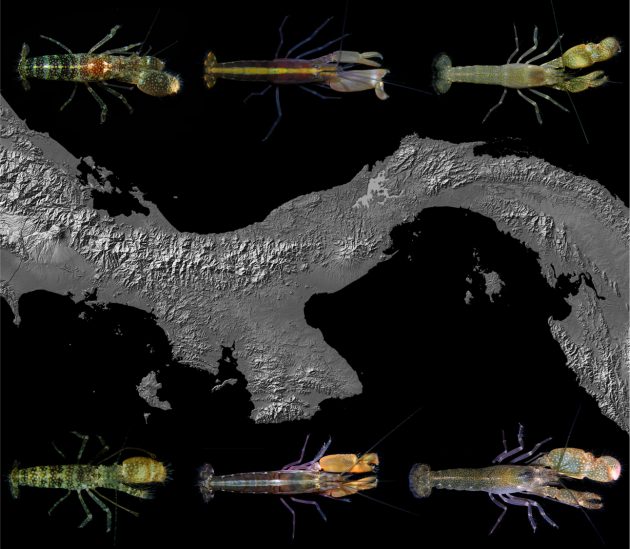 Snapping shrimp species on either side of the Isthmus of Panama are morphologically and genetically similar. Shallow water dwelling species are more closely related than deep dwellers, as would be expected by a slowly emerging isthmus. (Image by Arthur Anker)

The first paper to propose an earlier connection, published by Camilo Montes, professor at the Universidad de los Andes, and STRI staff scientist Carlos Jaramillo in 2015, asserted that tiny particles called zircons found in northern Colombia arrived there 15 million years ago via rivers from the Panama Arc along a land bridge. The authors of the new paper reveal that, in fact, there are several possible sources for these zircons, all of which require less convoluted travel to arrive at their resting place in the Magdalena basin.

The second paper to propose an earlier isthmus by Christine Bacon, post-doctoral fellow at the University of Gothenburg, suggested that molecular data from terrestrial animals and plants corresponded with geographic splits in marine animals, assuming the correspondence must have been due to a land bridge. The new study questions their use of a universal rate of evolution—“different species evolve at different rates,” Harilaos Lessios, a coauthor, said. They also question their use of genetic splits for land animals as evidence of the continental connection because “a land bridge would not cause genetic divergence, but would, on the contrary, allow greater genetic mixing between the continents.” 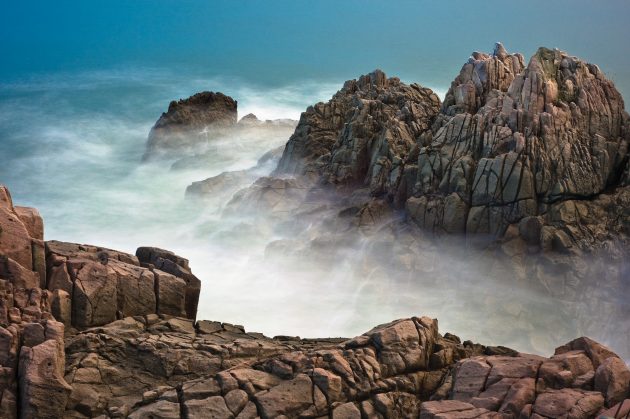 Miocene basalts emerge from the ocean along the Pacific coast of the Isthmus of Panama. (Photo by Aaron O’Dea)

In addition, the new paper mentions that Bacon et al.’s study omitted several important published genetic analyses, which skewed their results and when included, eliminate the main line of evidence that marine and terrestrial events coincided.

The authors concluded, “Our review and new analyses aims to clarify the issue by bringing together expertise from a wide array of different lines of evidence. Given all the available evidence, we strongly caution against the uncritical acceptance of the old isthmus hypothesis.”

Reconstruction of a river delta in northwest Venezuela 9 million years ago. Fossils uncovered in the Urumaco Formation show the delta was home to a wide variety of animals, many of whom were giants, such as sloths, rodents, armadlillos and crocodiles of immense proportions. All of the land animals found so far disocvered in the Urumaco have a south American affinity demonstrating no land bridge with North America at this time. Only later, after three million years ago when the land bridge formed did the Great American Biotic Interchange take place. (Image by Jorge Gonzalez)

The Smithsonian Tropical Research Institute, headquartered in Panama City, Panama, is a part of the Smithsonian Institution. The Institute furthers the understanding of tropical nature and its importance to human welfare, trains students to conduct research in the tropics and promotes conservation by increasing public awareness of the beauty and importance of tropical ecosystems.