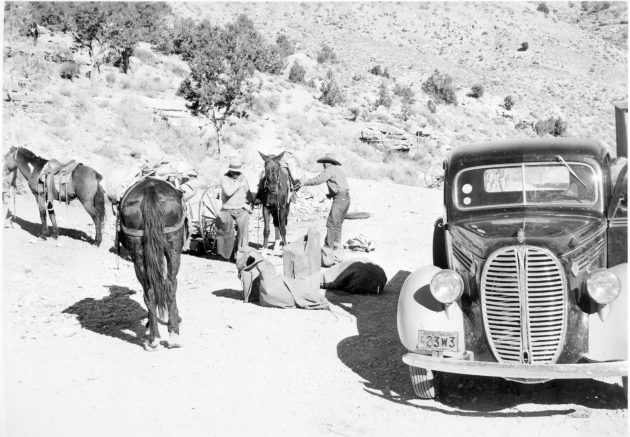 In an age of one-hour delivery and overnight shipping, a corner of the country still gets its mail by mule.

That’s right. For a small group of people living in the Grand Canyon, the post comes via hooved carriers who trek hours down into the canyon to deliver parcels—six days a week.

It’s the last official mail-by-mule route in the country, and probably one of the last in the world according to Daniel Piazza, chief curator of philately (the study of stamps) at the Smithsonian’s National Postal Museum. The route is featured in the new Postal Museum exhibition “Trailblazing: 100 Years of Our National Parks,” which explores the connection between two seemingly unrelated national services: recreation and the mail. 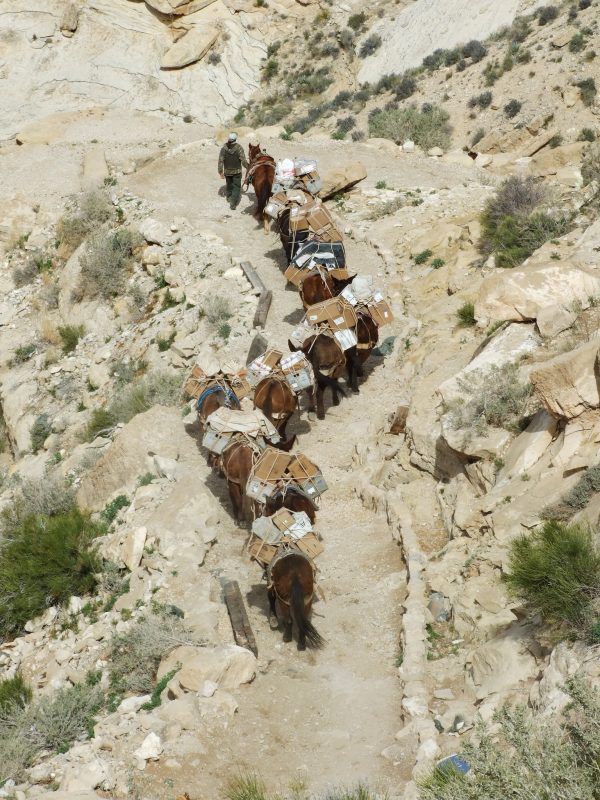 A mule mail train laden with items for the people of Supai, Ariz., on a recent descent into the Grand Canyon. (Photo by Daniel Piazza)

In the Grand Canyon, we don’t know how long the mail has been traveling by mule, but by the time museum photographs documented the route in 1938, it was a well-established method for deliveries.

For decades, and possibly centuries, mules have carried the mail down to the Havasupai people, an American Indian tribe who live in the Supai village, in the Grand Canyon but outside National Park jurisdiction. Another unofficial route carries mail to a tourist lodge called Phantom Ranch—it’s not through a U.S. Postal Service contract, but the mail that comes and goes as a courtesy to guests does get a special marking that it was “mailed by mule.”

These areas are not accessible by road. There are only three ways to reach them: by hiking (mule optional) down the canyon, rafting down the Colorado River or by helicopter. 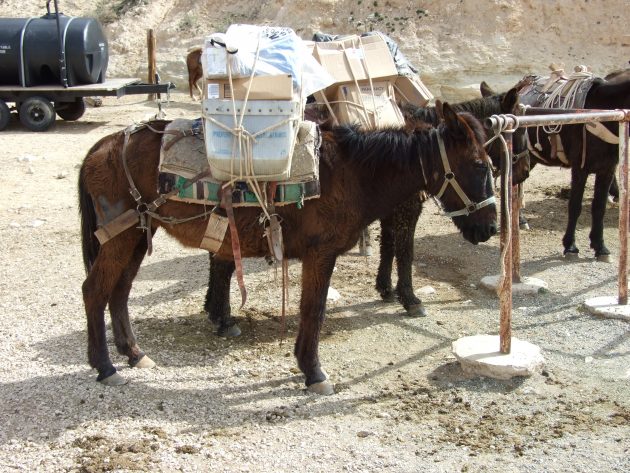 Mail is loaded onto the mules near the top of the trail. They then begin their trek down through the Grand Canyon to Supai at the bottom. Much of their cargo is food. The trip requires three hours down and five hours back up. (Photo by Daniel Piazza)

So the mail comes by mule. For the Havasupai route, it’s three hours down, but five hours back up. At least two mules trains are on the route each day, so mules and riders don’t have to make the trip down and back without a stop overnight in the village.

Unlike your mailbox, the majority of the deliveries aren’t magazines. Without nearby grocery stores, or stores of any kind, the post serves a different purpose. 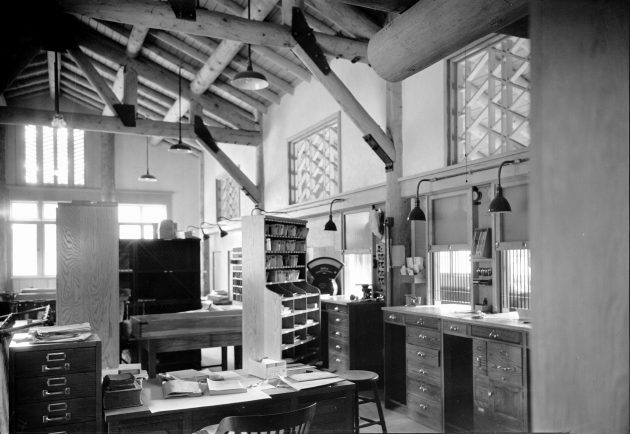 The mail supplies the Havasupai people with a multitude of modern amenities, from packaged food to medicine to small appliances. The village could not sustain itself without the mail.

One of the mule train’s last stops before the canyon is in Peach Springs, Ariz. It’s the only post office in the country with a walk-in freezer, to keep frozen food as cold as possible before the next leg in its journey.

From there a contractor picks up the mail and drives it an hour on a rough road to the top of the canyon. It’s then handed over to the mule team, which is also a long-standing operation. Piazza says the same person has held the contract with the Postal Service for more than 25 years, and chances are good his son will inherit it when he retires—there aren’t many people clamoring to run the mule mail. 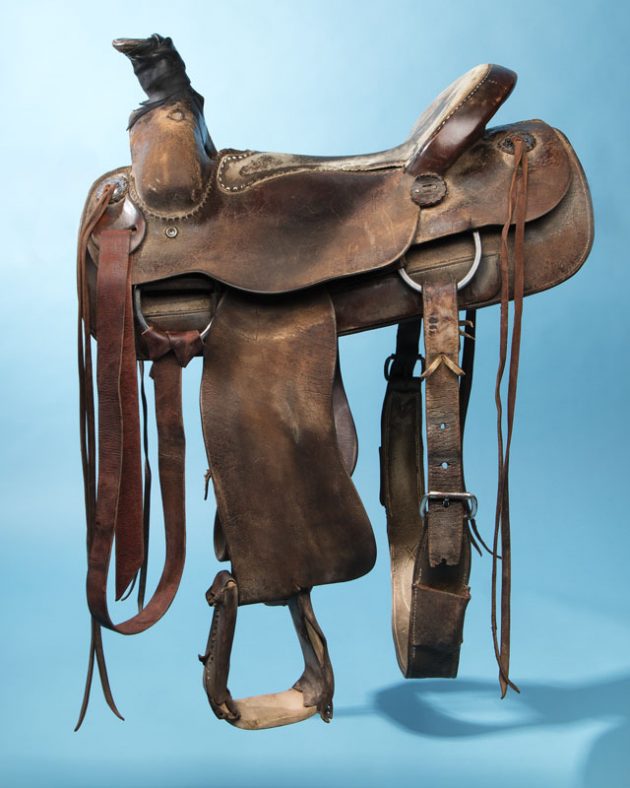 When Piazza saw the highly unusual operation in person, he photographed the array of packages lined up for shipment. Dish soap. Pharmaceuticals. An Amazon Prime Box.

Those all get loaded up on the mules, up to 200 pounds per mule at a time.

It’s quite a scene. For Piazza, research from books and documents can’t replace being in the field. “You really just to have to go and see it and photograph it.There’s no way to do that other than visiting,” he says.

It’s also a chance to collect objects for the museum, like the saddle that’s now part of the exhibition. In person, its size is striking, and stands in for the large animal that makes the march down with all that mail. Get up close and you can see how the saddle molded to its rider’s legs.

The mule mail contractor offered to donate a new saddle to the museum, but this one—well-worn and frequently repaired—speaks to a long and hardy life on the postal route. 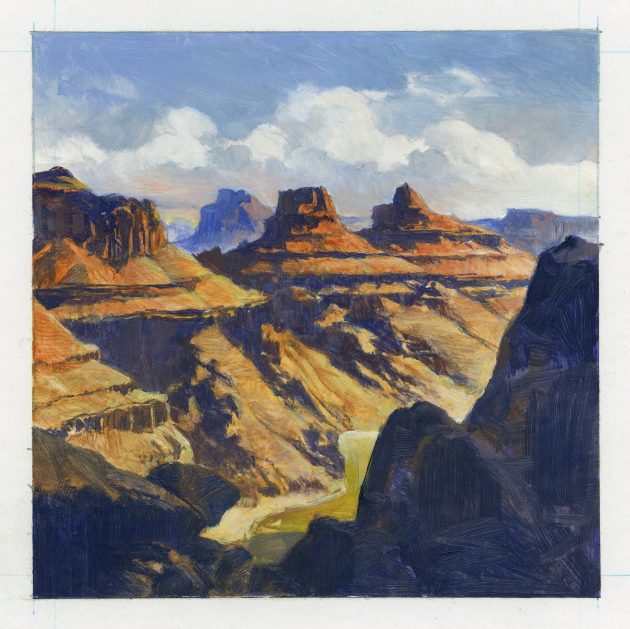 A pre-1920 photograph by Putnam and Valentine inspired Dennis Lyall’s artwork for the 1998 32-cent Grand Canyon stamp in the Celebrate the Century series. After eleven years as a National Monument, the Grand Canyon became a National Park in 1919. The stamp honored this event as one of the decade’s greatest achievements. This artwork from the “Trailblazing: 100 Years of Our National Parks” exhibition is on loan from the United States Postal Service, Postmaster General’s Collection.

Be glad you aren’t greeted by the smell, though, which Piazza described as “wet mule” when it arrived at the museum. It’s since been packed in charcoal for a time to reduce the aroma, before going on display in the exhibition.

The saddle, and the mule mail route it traversed, are just a piece of a bigger story about mail and our National Parks. The Supai village is an extreme case but many people live in the parks, especially out West, where the nearest town might be a 45-minute drive away. Those rangers and workers need supplies, and the Postal Service honors its commitment to deliver wherever there are people.

“Trailblazing: 100 Years of Our National Parks” is on view at the Smithsonian’s National Postal Museum through March 25, 2018.