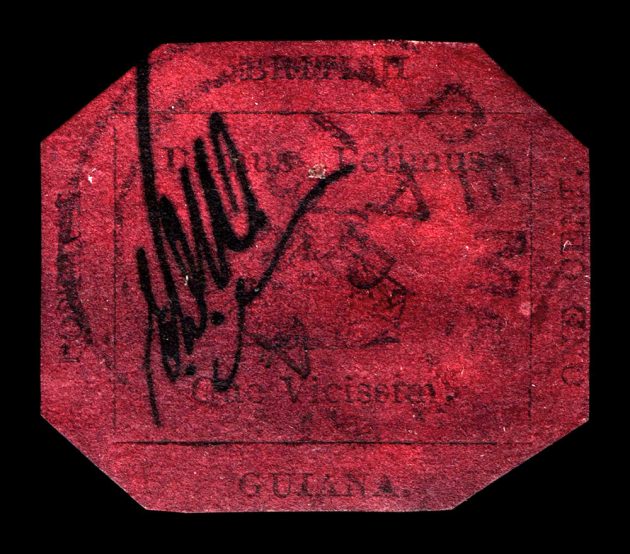 A new “must see” for visitors to Washington, D.C., is being recommended in addition to the White House, Smithsonian and Washington Monument. “The 1-Cent Magenta postage stamp at the Smithsonian’s National Postal Museum is a once-in-a-lifetime opportunity,” Scott D. English, executive director of the American Philatelic Society, observes.

The stamp’s extreme rarity was generated by a simple government mix-up. A British colony in British Guiana had ordered 50,000 stamps in denominations of 1 and 4 cents. The British government shipped only 5,000. 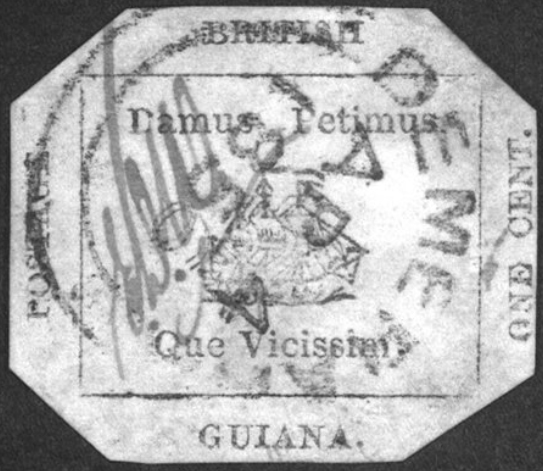 An image of the 1-Cent Magenta’s front with magenta light wavelengths removed to show the printed stamp design. Within the square is a motto and ship figure, approximating the symbol on the early British flag. (Image courtesy National Postal Museum)

When the next stamp shipment arrived from England, all provisional stamps were destroyed. Of those that were mailed, the 4-cent ones on correspondence and document envelopes survived. Most 1-cent magentas that were affixed to the Royal Gazette newspaper, ended up in the trash.

Seven years later, in 1873, 12-year-old stamp collector Louis Vernon Vaughn discovered the 1-Cent Magenta among some old papers at his uncle’s home in British Guiana. He sold it for some more colorful stamps to a dealer who recognized its value. The rest of the story is like a historic novel, as the singular 1 cent Magenta passed through the hands of 12 different collectors, including, after World War I, the government of France. 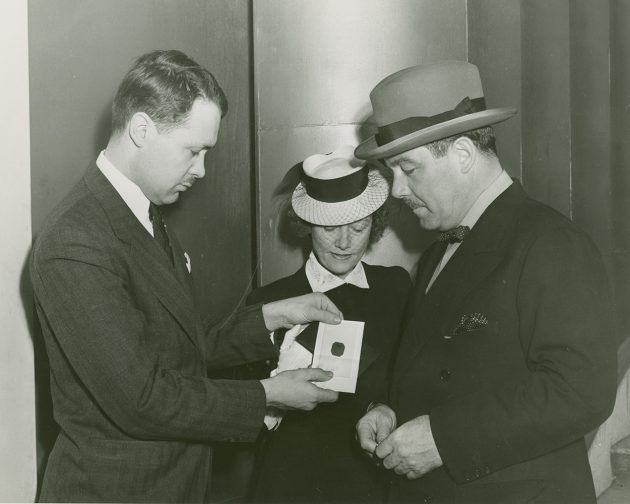 Owner Ann Hind shows the 1-Cent Magenta to stamp collector Ernest Kehr (left) and Grover Whalen, president of the 1940 New York World’s Fair. Her husband paid $32,500 for it in 1922. She sold it in the early 1940s for $45,000. (Photo courtesy of The New York Public Library, Astor, Lenox and Tilden Foundations)

As the only one of its kind in the world, this 1-cent stamp generates headlines and breaks records every time it sells. It has spent most of its 160-plus years behind bank vault bars, appearing only on rare occasions. The Postal Museum display is the 1-Cent Magenta’s longest and most publicly accessible exhibition ever.

Owner Ann Hind sued to break her husband’s will to obtain the Magenta; she won and put it on display at the 1940 World’s Fair in New York City. Another owner locked it in a bank vault. When he traveled, he took it with him in an attaché case handcuffed to his wrist. Over the years a number of owners of the Magenta stamp have added their marks of provenance to its back.

The 1952 comic book Walt Disney’s Donald Duck and the Gilded Man introduced a generation of young readers to the story of the 1-Cent Magenta. (Image ©1952 Walt Disney Productions. All rights reserved. Loan from Stuart Weitzman.)

According to Daniel Piazza, National Postal Museum chief curator of philately, “the current owner considered exhibiting the stamp at a number of museums in the United States and Great Britain but selected us, where the stamp will be displayed until November 2017. Director Allen Kane, and I strived to provide a safe environment to exhibit the 1-Cent Magenta,” investing resources to create the best technical environment to exhibit the Magenta and keep it safe.

The stamp sits in an environmentally controlled atmosphere with lighting that has a spectral response and does not degrade its paper, ink or background color. Curators and lab personnel continually check the setup. Still, the Postal Museum Website contains this warning: The 1856 British Guiana 1-Cent Magenta may be temporarily unavailable for viewing should preservation, conservation or presentation issues unexpectedly arise. Please check with the museum in advance of your visit for specific exhibit dates and availability. (Note: It goes back on view Friday, June 10, after a two-week hiatus.)

“In some ways this is the most challenging exhibit the National Postal Museum has ever created,” Piazza adds. “It had to appeal both to advanced stamp collectors and the public and preserve the material and ink of the stamp.” 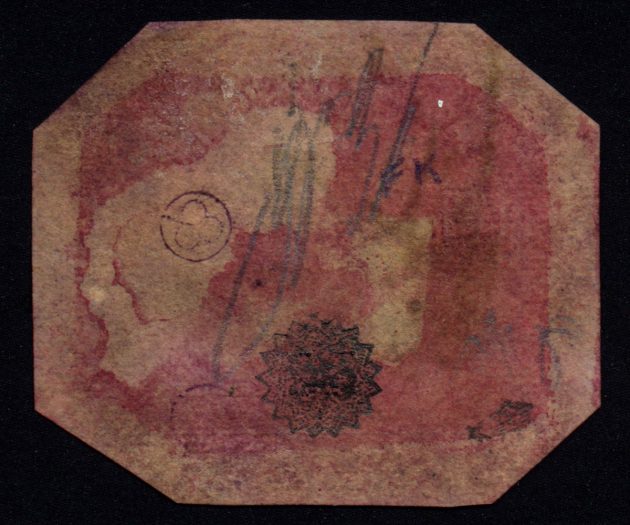 Multiple markings on the reverse of the stamp testify to its provenance, or ownership history. (Image courtesy National Postal Museum)

Of course, its uniqueness as a provisional stamp, as a rarity, as a documented art work sought by many for a century and a half, seen by several and owned by few makes this tiny paper scrap newsworthy and rare.

“The 1-Cent Magenta exhibit is the chance of a lifetime, literally,” Piazza says. “The stamp was hidden away since I was a child. It is a remarkable stamp with a remarkable history.”

The American Revolution history you didn’t learn in high school