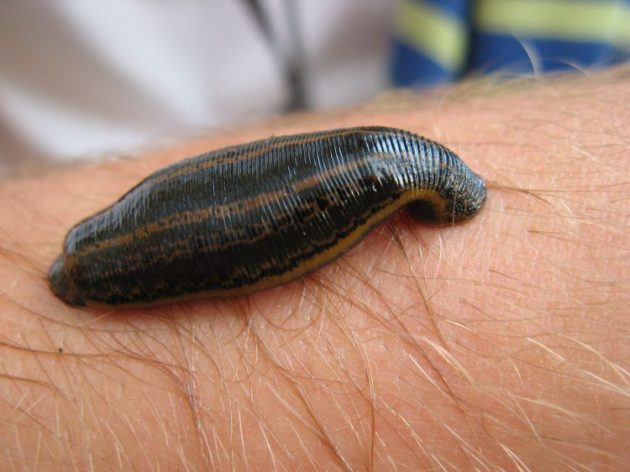 European Medicinal Leech “Hirudo medicinalis.” Sucker is on the left, blood-feeding mouth is on the right. (Encyclopedia of Life image by Pavla Tochorová)

Thanks to a recent reassessment of specimens preserved in jars of alcohol at the Smithsonian’s National Museum of Natural History, New Hampshire is now on a short list of states that can claim the New England medicinal leech, Macrobdella sestertia, as a native species. Bright olive green with small reddish-orange spots, scientists discovered three M. sestertia specimens in the museum’s collection. Collected in 1936 in Suncoop Pond near Epsom, N.H., they had been mistakenly identified and labeled M. decora (or the North American medicinal leech) some 78 years ago.

Researchers used microscopes to examine the gonads of the specimens, which revealed the leeches had been misidentified. Smithsonian Research Zoologist Anna J. Phillips and Ricardo Salas-Montiel, a master’s student at the National Autonomous University of Mexico, made the discovery. Their work was presented recently in the Proceedings of the Biological Society of Washington.

Known only from Maine, Massachusetts and now one New Hampshire pond, M. sestertia is one of the rarest and poorly known leeches in North America. It can grow up to five inches in length and is a Species of Special Concern in the state of Massachusetts. 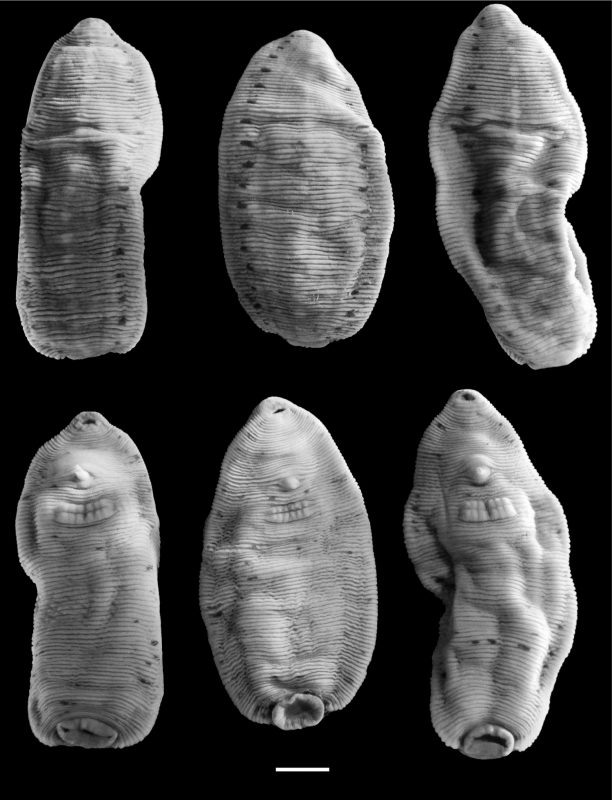 These three specimens of “M. sestertia” in the collections of the National Museum of Natural History (dorsal, top, and ventral views shown here) were collected in 1936 in New Hampshire and incorrectly identified as a different species.

Despite being called a medicinal leech, M. sestertia has never been used in medicine, leech expert Phillips points out. It gets the name from its blood-feeding behavior, similar to the European medicinal leech Hirudo medicinalis, which was widely used in medicine in the 1700s and 1800s. “Leeches that feed readily on humans have taken on the name ‘medicinal,’ however there are members of these families that don’t feed on humans,” Phillips says. 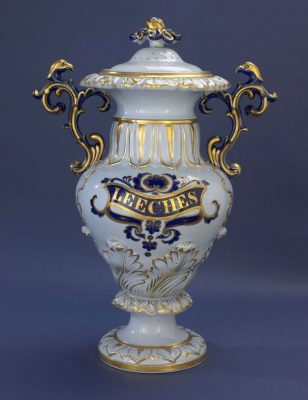 During the 19th century, when bloodletting represented America’s premier medical theory, leeches were employed by physicians on a massive scale. This fancy 19th-century display jar from the Smithsonian’s National Museum of American History was used by a pharmacist to highlight his supply of medicinal leeches. Elaborate presentation indicates the high value leeches held as a commodity during this time.

Demand for live European medicinal leeches once skyrocketed in Europe and the United States as treatment to drain “bad blood” or to “balance the humors,” then the supposed cause of illness and infirmity. Leeches were attached to a patient’s skin to gorge themselves. “Leeches were used as a cure-all for everything from headaches to the common cold,” Phillips says.

Hirudo medicinalis were put to work across Europe and transported in great numbers to the United States and elsewhere, sparing the native U.S. species. “Populations of the European medicinal leech were so overharvested that today it is considered a threatened species by the International Union for Conservation of Nature,” Phillips says. “Today, a different leech species, Hirudo verbana is commercially sold for medicine.” They use in modern medicine is for quite a different purpose.

In 2004, leeches (H. verbana) were approved by the Food and Drug Administration as a “medical device” to prevent post-surgical congestion of the veins. “If you have a skin graft, finger reattachment, or plastic surgery, leeches can be put on the affected area to suck out extra blood that may pool in the tissue causing swelling,” Phillips says. “Anticoagulants in leech saliva enter the bite, go into the wound and keep blood from clotting. In this way leeches increase blood circulation, reduce swelling and promote healing. Leeches have tiny mouths so it is easy to put them on the ends of fingers and noses and ears.”

Hospitals can order leeches sent overnight, starved and ready to feed from companies such as Leeches USA or Biopharm Leeches.

In the water leeches attach to your skin first using a muscular sucker, similar to a suction cup located on their tail end. Next, they bite with their mouth at the other end using two or three jaws arranged like a Mercedes Benz logo, Phillips says. “The jaws are lined with very fine teeth—up to 150 per jaw—they press the jaws out and move them back and forth slicing the skin and creating the wound. Then they start sucking.” 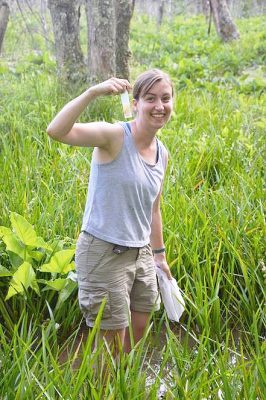 Only about one-third of leech species have jaws, Phillips adds. “Others have stylets or cutting plates, or have a proboscis for feeding. Almost all medicinal leeches have jaws.”

Blood-feeding Macrobdella can eat between six and 10 times their bodyweight in one meal and take a long time to digest a blood meal. “When I’ve kept leeches in a lab they only need to eat about 3 or 4 times a year. When they take in a blood meal they need to digest the bits of blood differently. They first eject all the plasma, then process more complex cells such as red and white blood cells,” Phillips says.

“There is little evidence to suggest that leeches transmit disease between humans,” Phillips continues. “It is possible to detect the presence of viruses in the leech gut for several months after they have fed on infected blood, but the viruses do not infect humans during subsequent feedings. Some leeches are vectors for turtle parasites, but these parasites do not pose a threat to humans.”

“The diet of leeches is still something we are exploring. Many leeches are free-living, and we do not know exactly what they feed on,” Phillips says. “Out of more than 680 described leech species, just a handful will feed on humans. Leeches are found in freshwater, terrestrial and marine habitats worldwide except for on Antarctica.”

While the diet of the mysterious M. sestertia is unknown, Phillips thinks it could be similar to that of other Macrobdella species: primarily feeding on frogs, but also frog eggs, and perhaps even humans. “Some leeches only feed on insect larvae, some only on snails, still others only fish. Aside from the blood-feeders, there’s a whole bunch of leeches that predominantly feed on earthworms,” Phillips says. 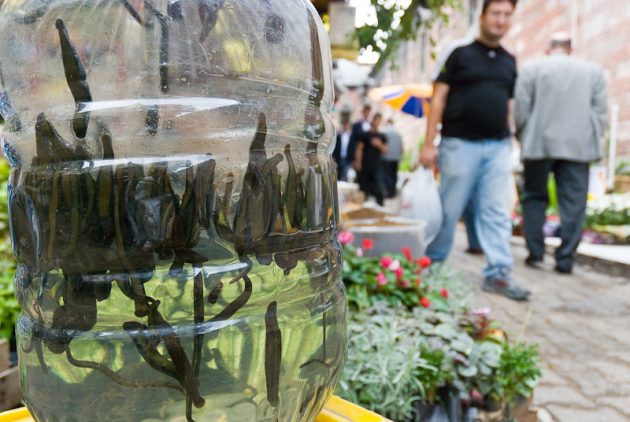 Leeches for sale in the pet markets beside the Egyptian Bazaar, Sultanahmet, Istanbul. (Flickr photo by RStacker)

No one knows how long Macrobdella species live in the wild, but Phillips estimates three to four years. “Leeches seem to continue to grow as long as they live. Big ones are a target for being eaten by birds, fish and other animals,” Phillips says.

Why does a poorly known leech species living in New England matter? “Because everything is connected,” Phillips explains. “In the wetlands in New England where this leech is found, there are many organisms that contribute to those ecosystems. These ecosystems have complex, interconnected food webs that rely on a diversity of organisms. All ecosystems are like a machine; to function correctly it must have all its parts in order to work.”

“For example,” Phillips continues, “leeches may be one of many invertebrates a bird eats. If there is a decline in aquatic insect larvae in a given year, the leeches may not be affected and the bird might not go hungry that year because it could eat more leeches. Having a diversity of organisms in an ecosystem helps it to maintain integrity and survive environmental disturbances, such as a flood, a drought or changing climates.”

Macrobdella sestertia has been found only a handful of times and has not been seen in the wild since 1997, Phillips adds. “The big question when you have a poorly-known species like M. sestertia is not necessarily that they have declined, it is more likely that no one is looking. This species may have a much broader distribution than what we know, but the right people have not seen the specimens. The danger right now for many animals including leeches is that if their habitat is being lost due to residential or commercial development of lands, then we may not even know that we are contributing to, if not the driver of, its decline.”