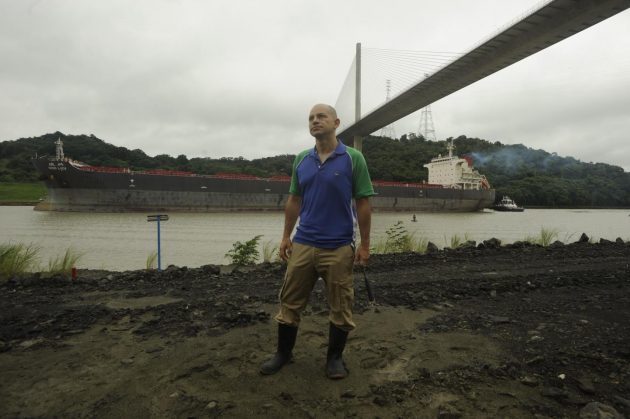 STRI staff scientist Carlos Jaramillo along with Bruce McFadden, curator of vertebrate paleontology at the Florida Museum of Natural History, led the five-year Panama Canal Paleontology Project funded by the U.S. National Science Foundation to salvage fossils uncovered by the earthmovers. The fossils reveal ancient migrations of flora and fauna between North and South America and include new species such as Panamacebus transitus, the earliest monkey found in North America. Excavations expose an unusually complete view of the geology of the isthmus’ formation–this record of global transformation of ocean currents, weather patterns and ecosystems would otherwise have remained buried under rock and rainforest.

The canal expansion reopens questions about whether exotic species will cross the freshwater corridor to establish themselves on the other side, potentially disrupting the existing ocean ecosystems. Former STRI director Ira Rubinoff argued in the 1960s that maintaining a freshwater bridge between oceans sharply reduced the risk of invasions likely with a sea-level canal, since most marine organisms cannot withstand abrupt changes in salinity. Staff scientist Mark Torchin asks if exotic species–and their parasites — will be helped or hindered by increased ship traffic arriving daily from around the world.

Nearly 17,000 commercial vessels cross the Gulf of Panama each year. Staff scientist Hector Guzman’s studies of humpback whale migration led the government of Panama to propose a “traffic separation scheme” to the International Maritime Organization. Ships in the Bay of Panama now reduce their speed and come into the Pacific entrance to the Canal through a narrow shipping lane. Researchers expect this to reduce the probability of collisions between ships and whales by 95 percent. 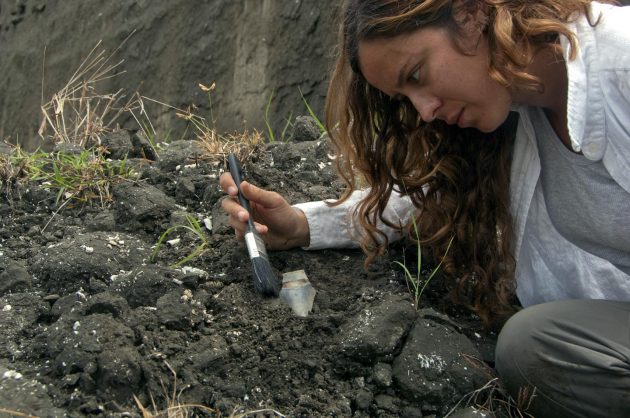 Catalina Pimiento was able to do her Ph.D. thesis at the University of Florida, excavating teeth of the largest shark ever, from the Panama Canal expansion earthworks. (STRI photo)

To study the Canal’s freshwater heartbeat scientists turn to its source — the surrounding forests. The Republic of Panama established Soberania National Park and additional protected areas to conserve the forested watersheds that supply the canal with its lifeblood. At the Agua Salud project located near Soberania, staff scientist Jefferson Hall and colleagues ask how native tree species in lowland tropical forests regulate water flow through soil, help maintain biodiversity and store carbon. The project recently collaborated with the BIO Program of the Inter-American Development Bank to produce the free, online publication, Managing Watersheds for Ecosystem Services in the Steepland Neotropics.

“Climate change increases the likelihood of extreme weather, such as intense storms and droughts,” said Matthew Larsen, director of STRI. “We don’t fully understand how the hydrologic and other natural systems in the Panama watershed will respond. STRI’s ongoing scientific investigations help the Panama Canal Authority and land-use managers to better understand the range of future conditions.”

Last year’s El Niño put the risk of water shortages in the canal into sharp relief. STRI monitoring stations throughout the region contribute to understanding such events. STRI maintains more than a dozen research facilities throughout Panama, including the Punta Galeta Marine Education Center near the Caribbean entrance to the canal and the Pacific-side Punta Culebra Nature Center. Both are open to the public, offering exhibits and educational tours.

STRI’s presence in Panama has always been intertwined with the canal. From 1910 to 1912, the Smithsonian’s Panama Biological Survey resulted in the first inventory of species and assessment of environmental conditions across the canal watershed. Panama’s President Pablo Arosemena encouraged scientists to extend their survey throughout the country, creating an important baseline for understanding the wealth and diversity of the region’s natural resources. The Barro Colorado Island research station was established in Lake Gatun, then newly flooded, in 1923. In 2016, along with Panama and the world, STRI looks forward to the fresh pulse that marks the completion of the canal expansion project.