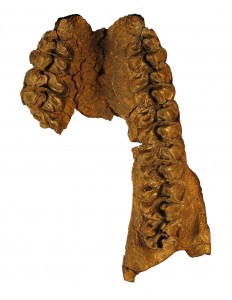 The fossil teeth of a 15- to 18-million-year-old three-toed browsing horse, Anchitherium clarencei, were recently discovered by scientists from the Smithsonian Tropical Research Institute and the University of Florida. They found the teeth during excavations of  newly exposed rock in the earthworks of the Panama Canal. Bruce MacFadden, curator of vertebrate paleontology at the Florida Museum of Natural History, University of Florida in Gainesville, described the fossil in a recent issue of the Journal of Paleontology.

Photo: This fossil of Anchitherium clarencei, found in the Panama Canal earthworks, is now in the collection of the University of Florida. (Photo courtesy Aldo Rincon)

The discovery significantly extends the southern tip of the known range of this prehistoric animal, and adds to previous fossil evidence discovered in strata from roughly the same period in Florida, Nebraska and South Dakota. It is by far the most complete fossil of a horse collected at the canal site in excavations spanning the last century; characteristics such as the shape of the horse’s teeth indicate it was primarily a forest-dwelling browser. This evidence supports MacFadden’s belief that the habitat of Panama was once a mosaic of relatively dense forest and open woodlands.

The ongoing excavation of the Panama Canal waterway to make the canal wide enough for supersized cargo ships has been a dream come true for Carlos Jaramillo, senior scientist at the Smithsonian Tropical Research Institute in Panama, and his colleagues. Jaramillo, working with the University of Florida and the Panama Canal Authority, organized a team of researchers and students who rush in to map and collect newly exposed fossils in the canal earthworks following large dynamite blasts set off by canal excavators. It was during one of these collecting excursions that Aldo Rincon, a paleontology intern at the Tropical Research Institute, unearthed the fossil teeth of Anchitherium clarencei. 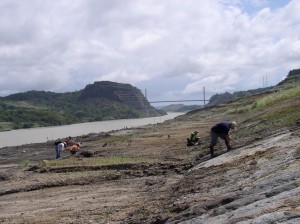 Photo: Following blasting to expand the Panama Canal, geologists and paleontologists organized by the Smithsonian Tropical Research Institute rush in to map, describe and recover any fossils they can find that might reveal more about the prehistoric ecology of Panama.

The Panama Canal excavation site “is one of very few places in the tropics where we have access to fresh outcrops before they are washed away by torrential rains or overgrown by vegetation,” Jaramillo says.

“We expect the fossils that we have been salvaging to resolve some major scientific mysteries, such as: What geological forces combined to create the Panama land bridge? Was the flora and fauna in Panama before the land bridge closed similar to that in North America, or did it include other elements?”

So far, 10 million cubic meters of earth have been removed from the Canal. The pace of operations is about to accelerate as the Canal Authority awards the final bids for the construction of a third set of locks. More information on the Panama Canal Geology Project is available at striweb.si.edu/jaramillo/current_research/index.html.