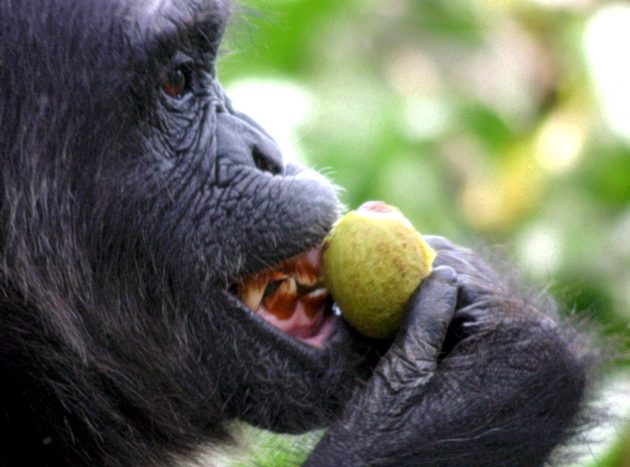 One of the primary features that distinguish hominids such as chimpanzees, gorillas and humans from the rest of the animal kingdom are uniquely dexterous hands. Humans stand out as the only hominid with fully opposable thumbs that can turn in toward the palm to touch the tip of each finger.

Developing such complex hands was a costly evolutionary feat, requiring not only anatomical changes to the wrist and fingers, but also expanded nervous tissue to process sensory and motor signals between fingers and brain. The additional brain power needed to operate dexterous hands called for a lot of nutritious, high-calorie food as well.

Now, a new study published in the journal Interface Focus sheds light on how increased finger dexterity and sensitivity may have benefited the diets of early apes, allowing them a competitive edge in obtaining high-quality food.

“We anthropologists have given little thought to why ape hands have greater dexterity than monkey hands,” says Nathaniel Dominy, evolutionary biologist at Dartmouth and lead author of the new study. A surprising omission, he believes, given the importance of hand dexterity and tool use to human development. “Hands are a hallmark of human evolution. It’s fair for researchers to look at complex hand use among primates and ask if it was a precursor to the manual dexterity that gave rise to modern humans.”

Based on field work in Uganda, Dominy and Peter Lucas, researcher at the Smithsonian Tropical Research Institute, who served as one of the study’s co-authors, determined a chimpanzees’ (Pan troglodytes) ability to feel the ripeness of a fig confers a significant advantage over rival species when selecting fruit. Monkeys that compete for the same food must rely on color and bite testing, but squeezing figs by chimpanzees supplies nearly 75 percent more information about ripeness than color. What’s more, squeezing a fig is four times faster than plucking it, biting it and spitting it out if it was not ripe. 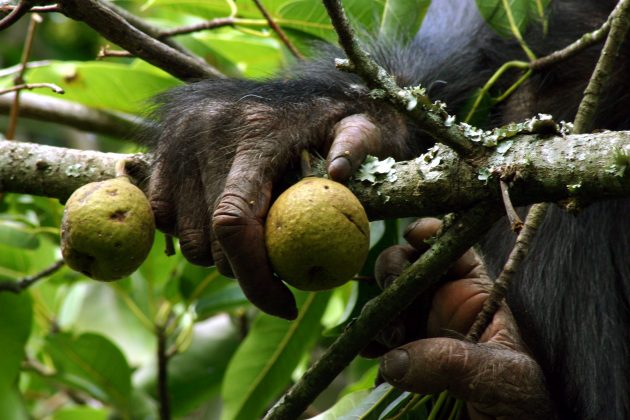 That speed can make all the difference when animals are competing for limited resources, Dominy says. It means chimps can forage more efficiently and consume more calories, especially during lean times when preferred foods are unavailable and they are forced to rely on figs.

“Figs are critically important,” Dominy says. “They’re not a particularly high-quality fruit, but in a given area, individual trees ripen at different times. Ripe figs are almost always available when other fruits are scarce, so animals depend on them at these crucial periods.”

Twenty percent of figs show no color change during ripening, which poses a sensory challenge. Think of how much longer it takes to select an avocado at the grocery store compared to a banana. If your hands weren’t capable of assessing an avocado by feel, it would take even longer because you would have to bite each one to determine if it was edible. “Palpating a fig adds 73.4 percent more information and reduces ambiguity as to whether it is ripe or not,” Dominy adds. 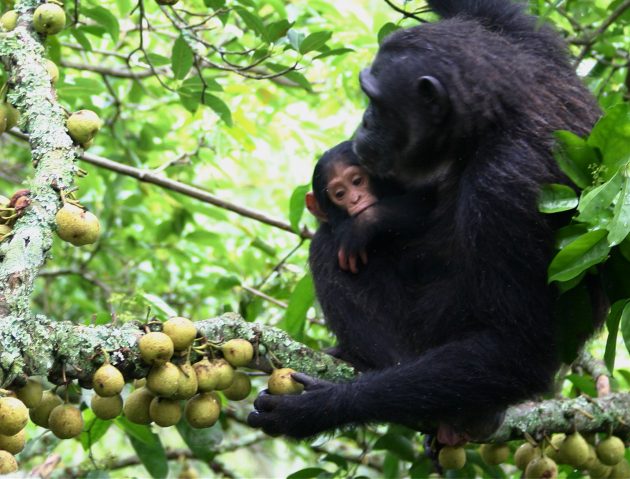 Chimpanzee in Kibale National Park squeezes a fig to test its edibility. (Photo by Alain Houle)

To conduct their study, he and his team spent many hours a day beneath fig trees watching and videotaping monkeys and chimpanzees foraging in the forest of Uganda’s Kibale National Park.

They noted which figs the chimps palpated and left on the trees. They also watched for pieces of fruit that fell inadvertently during eating. They did the same with black-and-white colobus monkeys (Colobus guereza), red colobus monkeys (Procolobus badius) and red-tailed monkeys (Cercopithecus ascanius), watching which figs they bit and threw to the ground and which they ate. When the animals moved on, the scientists climbed the trees to pluck rejected fruits and collect fig pieces from the forest floor.

A portable field kit designed by Lucas, Dominy’s Ph.D. advisor, was used to determine the physicochemical attributes of each collected fruit, such as color and firmness. Dominy then used a computer to assess, quantify and record the value of each trait to an animal’s fruit selection. 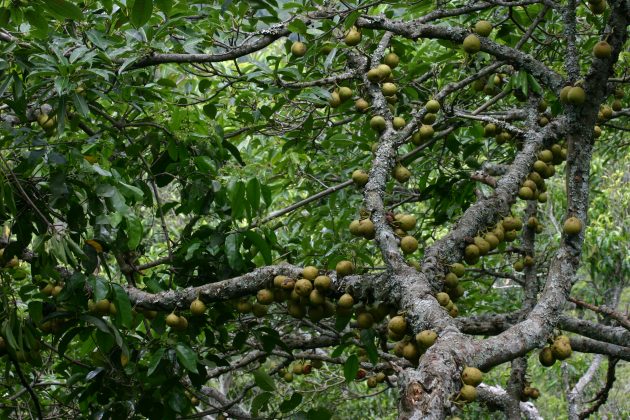 A clear pattern did emerge however, one that enabled Donimy to quantify the benefits of the chimpanzees’ fig selection strategy.

While Dominy and study co-authors cannot say the ability to feel if a fruit is ripe was a selective force in the evolution toward more sophisticated hands, their study draws attention to this idea.

During the last 10 million years the number of monkey species has climbed to several hundred while ape species have dwindled from dozens to four: chimpanzees, bonobos, gorillas and orangutans. One prevailing explanation among paleoanthropologists is the dependence of apes on ripe fruit. Higher sugar content feeds their large brains, but it’s a risky requirement for survival. Monkeys can eat fruit before it is fully ripe, leaving less food available for apes.

Perhaps speed at harvesting ripe figs when other resources were scarce is what gave some apes a needed advantage to compete with monkeys, the researchers speculate. Maybe apes with better hands were the ones that survived, and one of them ultimately gave rise to our ancestors.