Termites and ants are not something you’re likely to pour into a cereal bowl for breakfast or munch with toast and tea, but your ancient ancestors almost certainly enjoyed eating them—alive! In fact, new research on the insect-eating behavior of chimpanzees reveals termites and ants are a highly nutritious food that is easily accessible to chimps in the bush. Faced with the same conditions millions of years earlier, researchers say, our hominid ancestors may have gobbled down insects to ease the cravings of an empty stomach.

As a Ph.D. student, Robert O’Malley spent months following a chimpanzee troop in Gombe National Park, Tanzania, recording the insects that they ate and collecting samples to be analyzed at the National Zoo’s Nutrition Laboratory, a part of the Smithsonian Conservation Biology Institute (SCBI). His findings further our understanding of chimpanzee diets and also give us strong insights into the diet of early hominids.

Made famous by the research of Dr. Jane Goodall, the Gombe chimpanzees have been studied by scientists for more than 50 years, spanning several chimp generations. By watching these chimpanzee families Goodall not only noted that they often eat insects but also made the discovery that they use tools to reach them.

“Chimpanzees go ‘fishing’ for termites and ants by using sticks or leaves to prod insect mounds. Termite soldiers attack the probe and the chimps pull it out and eat them,” says O’Malley, who works at the Center for the Advanced Study of Hominid Paleobiology at George Washington University. “Many studies have focused on the use of tools by chimpanzees to eat insects but very little has been done on the nutritional benefit of this behavior. We had so many questions: How do they decide which insects to eat…perhaps by observing others in their group? Just how many insects are they eating? Do they eat insects only because they taste good, or is there any real nutritional benefit that has made this a part of their feeding behavior?”

To answer these questions O’Malley spent months constantly following the troop through the Tanzanian jungle.

“My research was done in the rainy season, which can be quite unpleasant due to the occasional torrential rain. I spent many hours each day going up and down these huge hills following the chimps and trying to stay with them,” O’Malley says. “If they were doing something like eating termites or ants then I would video record it. This would allow me to score, hopefully with great accuracy, the volume and type of insects they were eating. I also collected samples of the insects they ate to test back at the laboratory.” 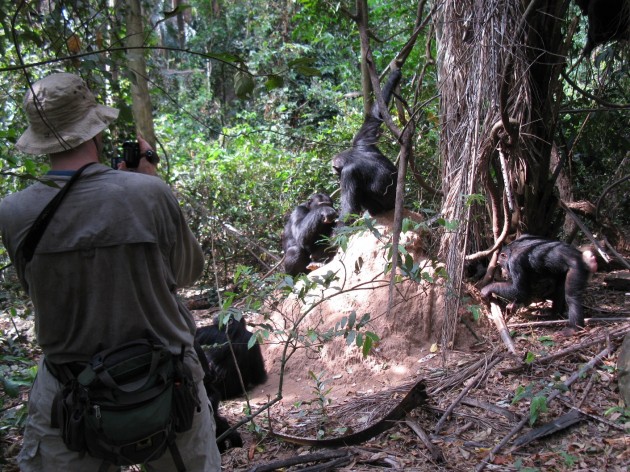 Back at the National Zoo’s Nutrition Laboratory, O’Malley and his co-author SCBI biologist Michael Power ground the insects up to measure their nutritional content. Although the different insects the chimpanzees ate differed in nutritional composition, their favorites were routinely those with the greatest nutritional return.

“Chimpanzees prefer eusocial insects like termites and it was these insects that most consistently met our estimates for recommended dietary intake of minerals, and non-trivial amounts of fat and protein,” O’Malley explains. “The termite soldiers that they eat supply them with several dietary minerals while the winged “alate” termite caste, which fly out to start new nests, are very high in fat—about 25 percent, which is extraordinary for an insect.” 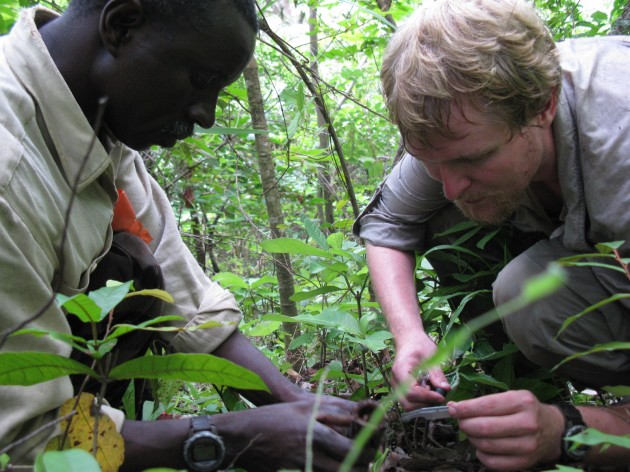 Robert O’Malley, right, and colleague collect insects in the jungle. These specimens were later taken to a laboratory to measure their nutritional value as a chimpanzee food source. (Photo courtesy Robert O’Malley)

Though most of their diet is ripe fruit, chimpanzees are omnivores like humans, not only eating insects but also meat, hunting animals such as monkeys and piglets. So why would chimpanzees spend so much time, more than four hours on some days, collecting and eating such a tiny food when they could be hunting?

“Going after insects is much safer, especially if mothers have their young with them,” Power explains. “The females are a lot more patient and often more skilled at termite fishing than the males. Males often don’t stay around if they don’t quickly get a good return. The females, however, stick it out, maybe because they realize they have a guaranteed source of food.”

Could our ancestors have spent time eating termites?

Several million years ago, our human ancestors lived in similar sub-Saharan habitats in Africa. These extinct hominids were approximately the same size as a chimpanzee and quite possibly used similar tools and strategies to harvest insects. 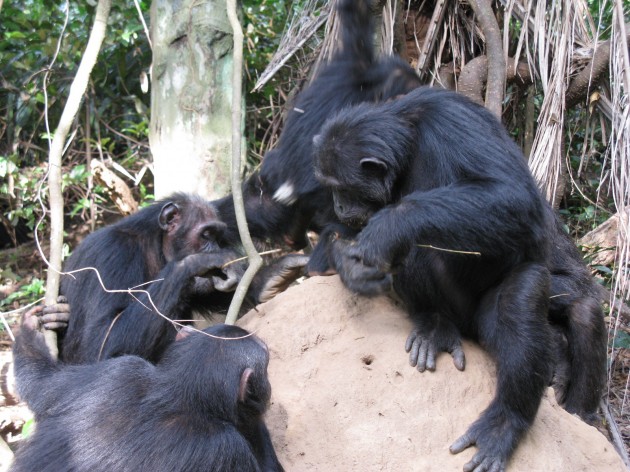 A chimpanzee troop in Gombe National Park, Tanzania, dining on termites that they pull from the mound using long sticks. (Photo by Robert O’Malley)

“Chimpanzees represent a useful referential model which we use to make inferences about the diet and behavior of extinct hominids,” O’Malley explains. “We will never be able to go back and observe what our ancestors were doing directly, but by studying chimpanzees we can infer how an omnivorous ape would deal with similar challenges. We can also look to the archeological records for supporting evidence for what we see in the field.”

Archaeologists Lucinda Backwell from University of the Witwatersrand, South Africa and Francesco d’Errico from du Centre National de la Recherche Scientifique, France, have found evidence, which suggests that bones were used as digging tools in termite mound soil by hominids in South Africa between 1.8 and 1 million years ago. Furthermore, all the insect genera that O’Malley witnessed the apes eating in Gombe are likely to have been available to hominids living in sub-Saharan East Africa for most of the last several million years

“We humans use tools, and many cultures around the world today still eat insects,” O’Malley says. “One of the implications of this study is that we show chimpanzees, using very simple technology, can use termites and ants as a viable source of fat, high-quality protein and minerals. This was also probably true for extinct hominids.”