One way to avoid a cold or the flu, doctors say, is to stay away from crowded places. Viruses spread fast in places where people congregate.

But how do ants, social insects that have hundreds of thousands of individuals living closely packed together in an underground nest, fight off infections that may threaten their colony? One way, researchers now say, is with a high carbohydrate (sugar) diet. 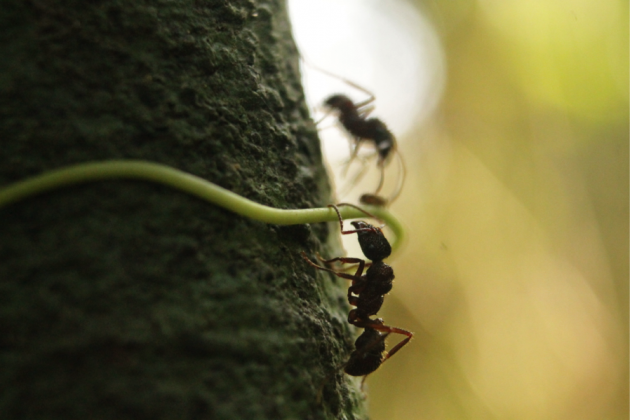 Ants of the species “Ectatomma ruidum” foraging on a tree, Barro Colorado Island, Panama Canal. (Photo by Selina A. Ruzi)

A recent study of ant colonies placed on two different diets—one high in protein and the other high in carbohydrates—revealed that when the colony was attacked with a parasitic fungus, ants with the high-carbohydrate diet had a significantly higher survival rate. Essentially, the scientists determined, more sugar meant more energy was directed to the ants’ antibiotic-secreting metapleural glands, a structure unique to ants. Worker ants spread the secretion on their exoskeleton. More sugar translates into more fungus-fighting antibiotics in the nest.

“In ants we are increasingly seeing that carbohydrates are just critical for colony function,” says Michael Kaspari, an ant expert with the Smithsonian Tropical Research Institute and the University of Oklahoma who was a co-author on the study. “It may be because ant colonies are such high energy organisms themselves, they need a lot of fuel. To me the big surprise of our study was finding out just how important having enough fuel is to keeping the immune system of a colony running.” 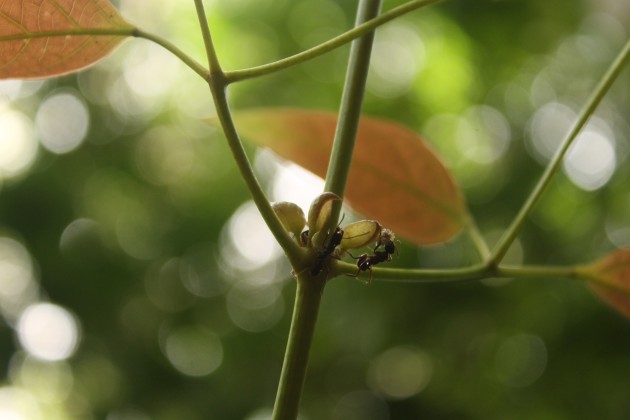 Ants of the species “Ectatomma ruidum” foraging on a tree, Barro Colorado Island, Panama Canal. (Photo by Selina A. Ruzi)

The study, carried out on Barro Colorado Island at the Smithsonian Tropical Research Institute in Panama and led by Adam Kay and undergraduate student Abbie Bruning of the University of St. Thomas in Minnesota, was published in Proceedings of the Royal Society B. A second part of the project involved blocking the metapleural glands in colonies of ants fed the two different diets. Blocking these glands eliminated the difference in survival rates between the colonies, the scientists report.

“This discovery adds a new insight to our understanding of ant evolution and how they became so successful despite the inherent costs associated with group living,” Kaspari adds. “Scientists like E.O. Wilson speculated a long time ago that ants got their start when they invaded the soil and that their antibiotic-producing metapleural gland was essential for the establishment of underground colonies.”

“Our study puts a new twist on this theory by saying yes, but in order to invade the soil and generate a lot of antibiotics ants needed to first find a steady source of carbohydrates.”

And that source came from an environment high above the soil in the tree canopy, Kaspari says. Ants co-evolved with angiosperms (flowering plants) because these plants needed the ants to defend them from other insects. The currency by which they paid the ants was basically sugar water, secreted from bark and flower blossoms.

Tropical ants such as the ones used in the study, Ectatomma ruidum, are found in the tropics climbing around in the forest understory and drinking this extruded sugar water. As long as the ants are up in the trees regularly visiting for a sugar fix, when they come across a caterpillar they’ll take it as well, benefitting the plant, Kaspari says. Ants also get sugar from aphids, which they farm and use just like humans use cattle, Kaspari adds.

Enhanced colony immunity, made possible by a high-carbohydrate diet, was crucial in allowing more ants to live together in tightly confined spaces, the study concludes. In turn, this facilitated the evolution of social behavior in ants.–John Barrat