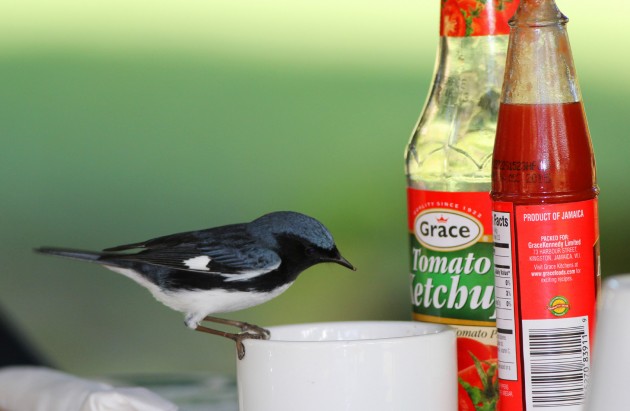 For Smithsonian ornithologist Gary Graves it was a captivating spectacle. At an outdoor café in Kingston, Jamaica, Graves watched three mornings in a row as a black-throated blue warbler (Setophaga caerulescens) appeared like clockwork to dip and eat from a sugar bowl.

“This bird obviously had been doing it a lot, long before I noticed,” Graves says. “It had a well-honed routine. It would fly away and 15 minutes later the same bird was back again, eating sugar. This went on for a number of hours.”

Many people have a sweet tooth, but to see a tiny bird eating sugar is uncommon because many bird species cannot digest raw sugar. And that is where the broader significance of this observation lies: one related to digestive enzymes and the ability of migratory warblers to enter a tropical forest already packed with native birds and find food.

Graves, a scientist in the Division of Birds of the Smithsonian’s National Museum of Natural History, answers a few questions about birds and sugar for Smithsonian Science News.

Q: Why is seeing a bird eating raw sugar unusual?

Graves: Straight sucrose is not easily digested by many animals since it is a disaccharide, consisting of two simple sugars, fructose and glucose, bonded together, one molecule of each. A lot of organisms have problems chemically breaking this fructose/glucose bond. For birds to do it their digestive system needs to excrete sucrases, an enzyme which can break this bond.

Robins, and thrushes in general, for example, have problems digesting sucrose. They lack sucrases and can’t do it; it gives them diarrhea.

The fact that this warbler was eating raw cane sugar, eating it repeatedly and coming back day after day is evidence that it undoubtedly has the ability to digest raw sugar. 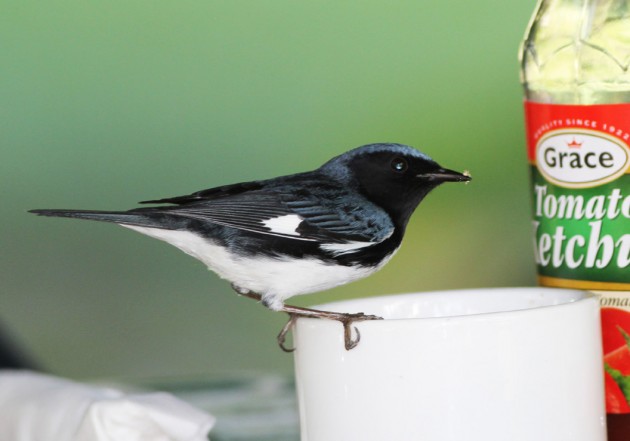 Black-throated blue warbler (“Setophaga caerulescens”) feeding on granulated unrefined sugar. Grains of sugar are adhering to the tip of the warbler’s bill. (Photograph by Gary R.Graves).

Q: So this a special adaptation of warblers?

Graves: Yes. More than 50 species of warbler breed in North America. Every winter millions of them fly to Mexico, Central America or the Caribbean to overwinter with communities of other birds—resident species that live in these countries all year round. Ornithologists have long been intrigued by the ability of millions of wood warblers to insinuate themselves into native communities of tropical birds each year. How do they find food in areas where huge populations of other birds—flycatchers, ovenbirds and ant birds, for example—already live? Why aren’t they excluded by the resident species?

It may be that a lot of the resident species are unable to eat foods that the wood warblers can; in this case, sucrose-rich nectars. These food sources are pretty much off limits to resident birds that  have very low levels of sucrase enzymes in their digestive systems. They naturally avoid sucrose-rich foods.

So when warblers fly to the tropics each winter, in addition to eating insects they are flexible and able to tap into the nectars and fruits that many local birds are unable to eat. This gives them an edge. And I think that edge probably is part of why warblers have been so successful in an evolutionary sense and have generated so many species. The entire warbler clade numbers more than 100.

Q: Can these birds taste sugar?

Graves: Probably, yet the extent to which digestive enzymes are co-evolved with taste receptors in wood warblers is unknown.

Sugar, especially in a dry form, is a pretty foreign substance that these birds are not going to encounter in nature. The fact that they see it,  sample it and consume it, indicates that they must be able to taste it. They don’t go to a table and eat salt for instance. How else can it be explained?

For a little bird to eat a couple of billfulls of sugar, it’s probably the equivalent of a grown person like me eating a couple of candy bars. That’s a heck of a jolt of calories and sugar in a super concentrated form. Its calorie needs were pretty much being met.

Q: Where do these birds find sugar in the forest?

Graves. In their breeding grounds in North America they  tap into sugar sources like the sap from maple trees, the source of maple syrup. When a sapsucker drills into a birch tree and little beads of sap show up, some of those are sucrose; warblers are able to utilize these things.

In most environments where wood warblers occur, hummingbirds also occur. If you have evolved in an area of the world where hummingbirds are frequent, as are many of the plants that co-evolved with hummingbirds and produce sucroses, you can also tap into this hummingbird pollination system and kind of have a free drink, if  you can find the flowers.

Warblers have been observed feeding at all these natural sugar sources, even sugar-water hummingbird feeders.

(Graves is author of a recent paper on this subject in The Journal of Caribbean Ornithology.)