Paddling the remote oxbow lakes and bayous of the White River National Wildlife Refuge in Arkansas, the team of scientists was seeking proof of a rare behavior in a common bird. Gazing through binoculars at giant bald cypress and tupelo trees in dozens of locations, they searched off and on from 2002 to 2008, looking for their tiny quarry fluttering around high-up openings in the tree trunks.

Finally, on a day in mid-May, one agile researcher donned a pair of climbing spikes and scrambled 15 meters up a cypress. He poked his arm into a narrow gap in the tree and snapped a photo.

Viola! Pictured in the grainy image was a tiny nest attached to the inside of the hollow tree containing three small chicks. Incredibly, the image was the first evidence in decades of a chimney swift (Chaetura pelagica) actually nesting in a tree—and not a chimney—in the lower Mississippi Valley. 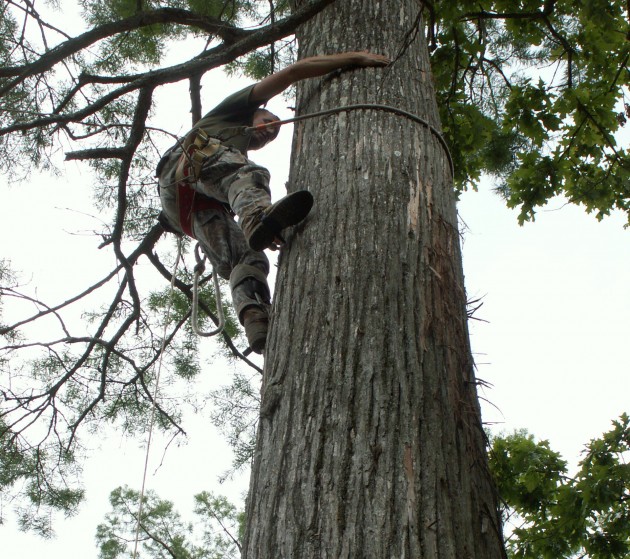 “The tree-roosting habits of the chimney swift was a quintessential natural phenomenon of colonial America, something that George Washington and Daniel Boone would have observed often on the western frontier in the mid-18th century,” says Gary Graves, an ornithologist at the Smithsonian’s National Museum of Natural History and co-author of a paper on the discovery published recently in the journal Southeastern Naturalist. “This behavior largely vanished 200 years ago on the Eastern Seaboard. Few living Americans have ever witnessed it.”

Curved talons, short legs
For tens of thousands of years before the arrival of Europeans to North America the common chimney swift nested and roosted inside hollow trees. Its curved talons, short legs and barbed tail feathers evolved especially to permit this bird to cling securely to vertical surfaces inside hollow trees. Chimney swifts also produce glue-like saliva that they use to glue their stick nests to vertical surfaces.

The first recorded instance of chimney swifts nesting in chimneys occurred in New England just 50 years after the Puritans arrived at Plymouth Rock. “It was amazingly quick how this bird colonized human habitations,” Graves says. 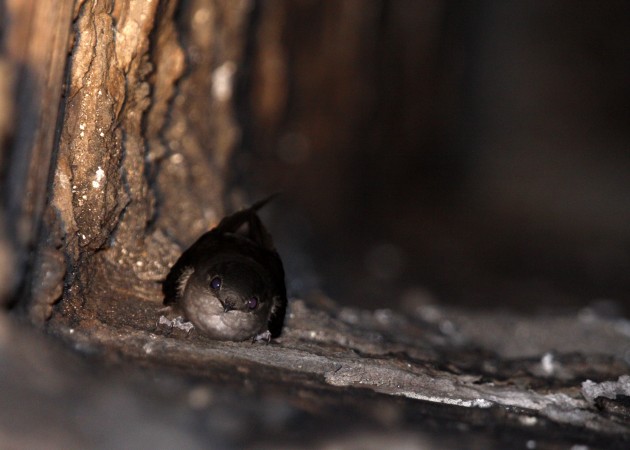 A chimney swift roosting inside a domestic chimney that is also used as a nest site. Swifts cling to the vertical wall with short legs and long claws, propping their spine-tipped tails against the wall below them. (Photo by Bruce Di Labio)

Colonists helped drive this profound shift from trees to chimneys by clearing millions of acres of primeval forest in eastern North America. By the early 1800s in the eastern U.S., the chimney swift was regarded as a bird of towns. Its common name “chimney swift” was coined by naturalist Thomas Nuttall in 1840.

Ecosystem barometer
Today, finding a chimney swift nesting in a tree is a rare event. To do so the researchers had to travel to a place with no chimneys and a lot of large, old trees. The White River National Wildlife Refuge fit the bill. “All of the refuge has been deforested several times during several periods of cuttings,” Graves explains, “but because there is no timber value in the old hollow cypress trees and tupelo trees growing there, they still line the waterways. Some of these trees are 1,000 years old.”

During the survey the team photographed two chimney swift nests and observed small numbers of swifts hovering around tree cavities at other locations, indicating possible nest or roost sites. As the survey was conducted on just a few of the 300 natural lakes and sloughs in the White River National Wildlife Refuge, the scientists believe the refuge may support a large population of tree-nesting chimney swifts. 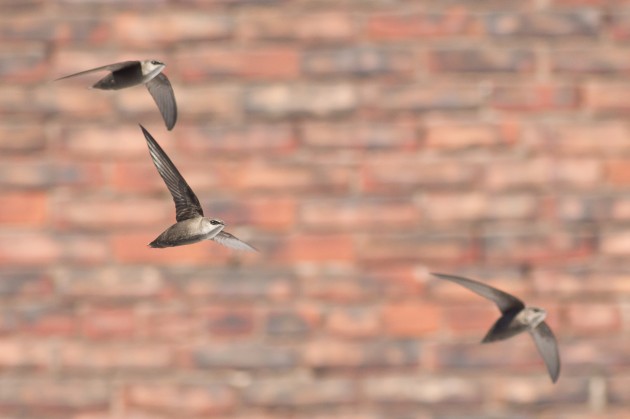 “The presence of tree-nesting swifts is a natural barometer of ecosystem health,” Graves says. “Only forests with many old hollow trees can support a thriving tree-nesting population of swifts.” Wildlife biologists have long known the value of hollow trees to wildlife. This Arkansas discovery reinforces the value of conserving the trees on public and private lands dedicated for wildlife and multi-use purposes, such as recreation, hunting, hiking, birding and boating.”

The discovery also emphasizes the value of the vast White River corridor in eastern Arkansas to the conservation of the lower Mississippi Valley.  “Chimney swift nesting in trees is a small thing in the grand scheme, but it resonates with the public….a vanishing behavioral phenomenon that is still hanging on in eastern Arkansas,” Graves says.

Chimney nesting, so far, has worked out well for the chimney swift because by the time most people fire up their fireplaces in the winter the birds have gone, Graves says. In July or August swift babies emerge from their nests and all the birds amass in large pre-migratory groups roosting together. Because they eat only insects, there is nothing for them to eat in Eastern North America in winter, so by October they head to South America. They return in late April when chimney use has pretty much ceased.

“Chimney swift numbers have declined significantly in the past couple of years in the East and we don’t know exactly why,” Graves points out. “We suspect that it could be due to the fact that a lot of chimneys are being capped.”–John Barrat