A bird’s nest is a small bowl-shaped collection of twigs and straw built on a tree branch. Right? Well…maybe. As Chris Milensky, museum specialist in the Division of Birds at the Smithsonian’s National Museum of Natural History explains, it’s not that simple. The shape, size, location and building materials of bird’s nests come in almost as wide a variety as do the birds that build them. So Smithsonian Science News sat down with Milensky for a quick “Bird Nests 101” lesson. 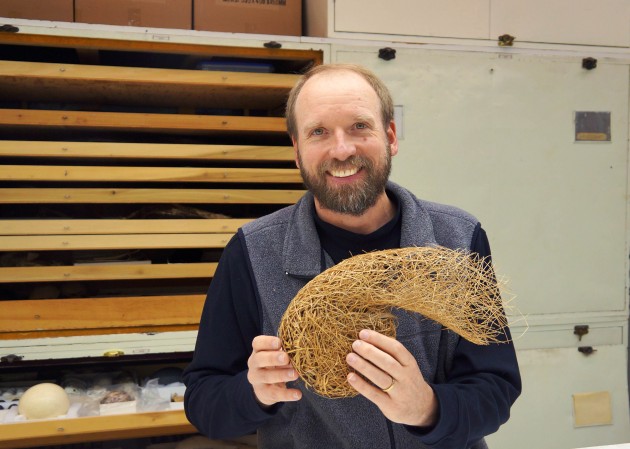 Smithsonian museum specialist Chris Milensky holds the intricately woven nest of the red-vented malimbe. It’s just one of the 5,000 bird’s nests in the Smithsonian’s collection. (Photo by John Gibbons)

Q: Do all birds build nests?

Milensky: No, many seabirds and shorebirds, like the snowy plover, just lay their eggs on sand or bare rock. Also there are some birds, such as the brown-headed cowbird, that are parasitic and will lay their eggs in other birds’ nests, leaving the care of their young up to the host species. 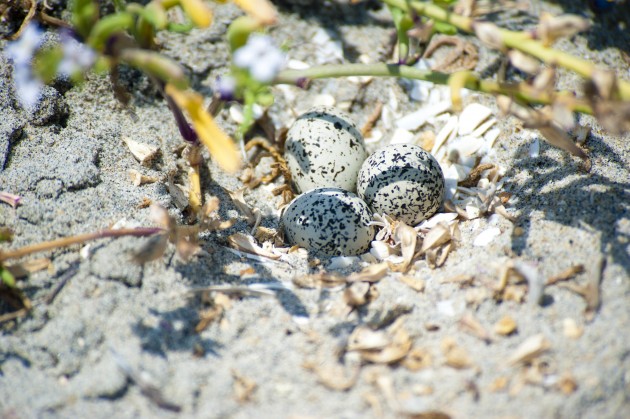 Like many shorebirds, the snowy plover does not build a nest, but rather lays its eggs directly on the sand. (Photo courtesy U.S. Navy)

Q: How do birds learn to build their nests–especially the  intricate ones?

Milensky: There has been some recent debate about whether nest building is a learned or instinctive behavior. It is primarily instinctive, but it has been clearly shown that birds that build intricate nests, like the group called weavers, learn and become better nest builders over time. 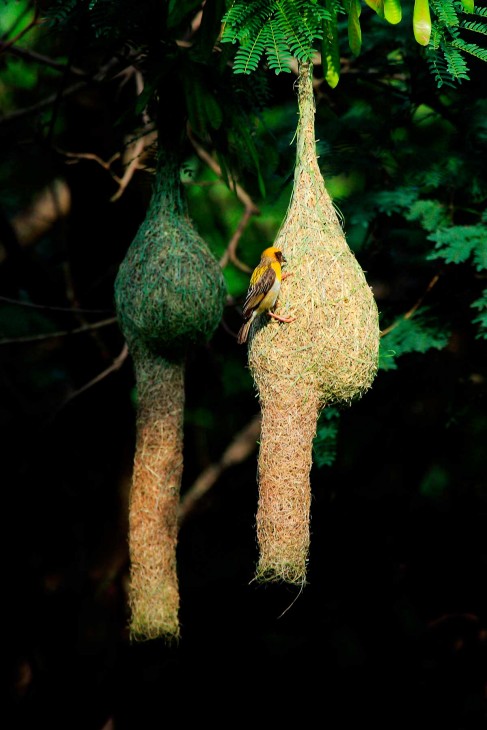 The baya weaver bird from Asia uses grasses and palm fronds to weave an intricate hollow ball suspended from the tip of a tree branch. To make it especially difficult for predators to gain access, the bird finishes by adding a downward-facing entrance tunnel. (Photo by Ramnath Bhat)

Q: Can you identify a bird species just by seeing its nest and not the bird?

Milensky: In many cases, yes you can. Some nests are incredibly distinctive and unique and leave is little doubt as to which species built them. Some prime examples would be the weaver birds with their intricately woven nests and birds of the genus Hornero with their large clay ‘adobe’ style nests. Also, eggs themselves are unique and identifiable which can help identify a species. 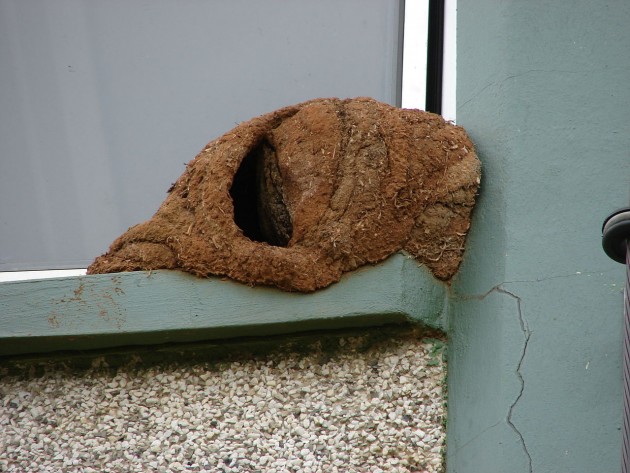 The unique construction of this dried mud nest with its entrance hole gives its builder’s identity away―a rufous hornero from South America. (Photo by Zimbres)

Q: Do birds build a new nest every year or reuse an old one?

Milensky: Most birds build or rebuild their nests each year. Some large raptors like bald eagles or osprey use the same nesting location and simply do home improvements to the previous year’s nest. Other birds build a new nest from scratch each year, as the old nests will typically not make it through winter. However, recycling materials from previous nests or building on top of an old nest is not uncommon in the bird world. Birds that build nests in tree cavities come to mind for this kind of behavior. 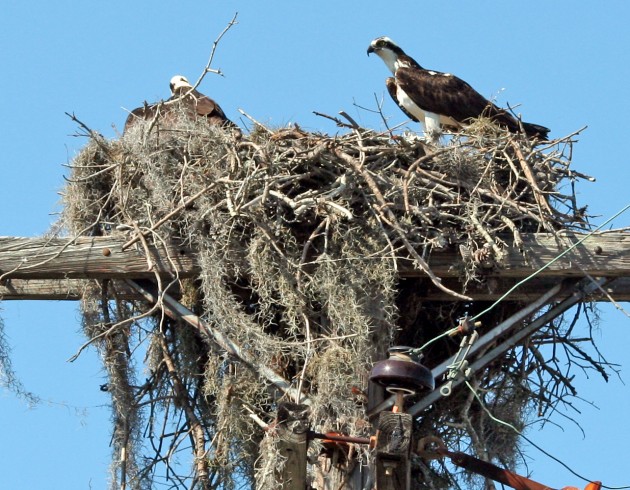 Ospreys usually return to the same nest each year, which is typically made of sticks, driftwood and seaweed. The pair often adds to the nest each spring, which can result in huge structures exceeding six feet in diameter. (Photo by Googie man)

Q: Do both the male and female build the nest together?

Milensky: In many species, nest building is part of the courtship ritual and so the males will build a nest as part of their attempts to attract a mate. In species with stronger pair bonds, the nests may be built jointly. 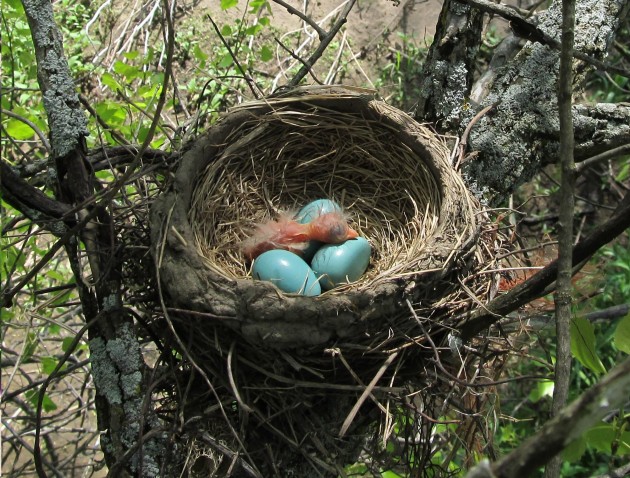 The male American robin has it easy―it’s the female that does all the nest building. (Photo by Pocout)

Q: A lot of species use twigs and grass to build their nests, but what are some of the more unusual materials birds use?

Milensky: The great-crested flycatcher and some other birds are known to use snake-skin sheds woven into the nesting materials. Birds in urban areas are known to use any number of things they find like aluminum foil, cigarette butts and dog hair. Crows in the western U.S. have been known to line their stick nests with barbed wire. A small bird called a swiftlet in Asia makes a nest out of its own saliva. 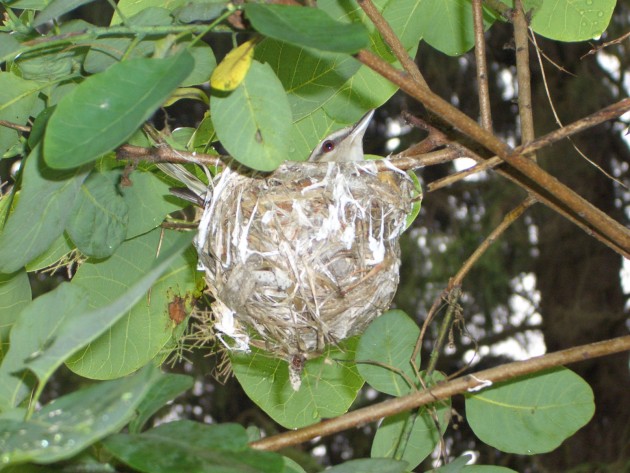 The red-eyed vireo builds a nest of bark strips, grasses, pine needles, wasp-nest paper, and plant fibers that hangs below a fork in a branch. The materials are glued together and to the branch fork with spider-webs. (Photo by Vernon R. Martin)

Q: Why do some birds build their nests on the ground? Isn’t it dangerous because of predators?

Milensky: Ground-nesting birds are especially susceptible to predators and human-related impacts. Species like the bobwhite quail are becoming increasingly rare due to various factors including an increase in the populations of raccoons, possums, foxes, cats and other small predators. There are also agricultural impacts associated with mowing hay fields during the nesting season. Birds overcome the threat of predators with camouflage and by remaining motionless. Other birds, like killdeer, have learned to distract predators by faking injury to lure a predator away from their nest. 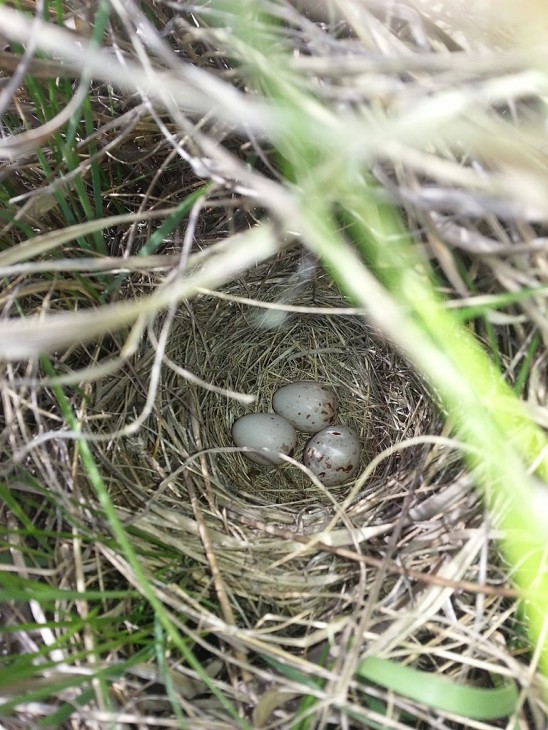 The nests of many ground-nesting birds, like the vesper sparrow, are more vulnerable to predators. (Photo by Kati Fleming)

Q: Do you have a favorite bird nest?

Milensky: I don’t have kids and the idea of raising children scares the heck out of me. Therefore, I am a fan of the Australian brushturkey. This bird builds a large mound of composting leaves and brush and the eggs are incubated by the heat generated from the composting debris. The young hatch fully feathered and are able to fly and function on their own the very first day out of the nest. No parenting required! 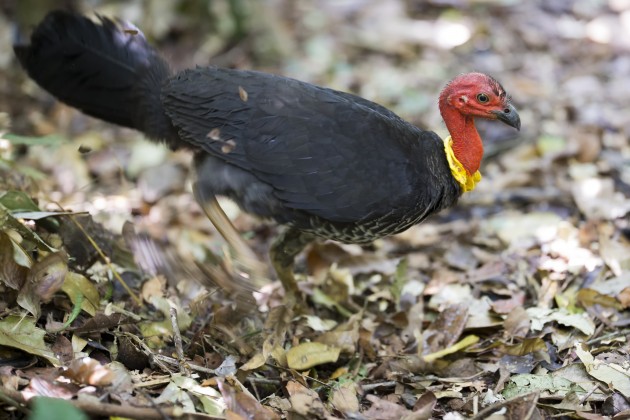 The Australian bushturkey does not even build a nest. It composts its eggs to make them hatch. (Photo by Jim Bendon)