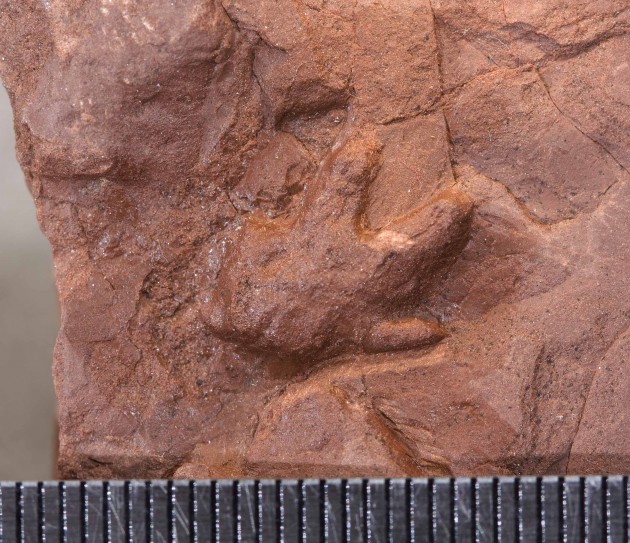 The hand print of a baby dinosaur from the nesting site in South Africa. (Images courtesy University of the Witwatersrand)

An excavation at a site in South Africa has unearthed the 190-million-year-old dinosaur nesting site of the prosauropod dinosaur Massospondylus–revealing significant clues about the evolution of complex reproductive behavior in early dinosaurs.

A new study, entitled Oldest known dinosaur nesting site and reproductive biology of the Early Jurassic sauropodomorph Massospondylus and published in the international journal Proceedings of the National Academy of Sciences, was led by Canadian palaeontologist Robert Reisz, a professor of biology at the University of Toronto at Mississauga, and co-authored by Hans-Dieter Sues of the Smithsonian’s National Museum of Natural History; Eric Roberts of James Cook University, Australia; and Adam Yates of the Bernard Price Institute for Paleontological Research. 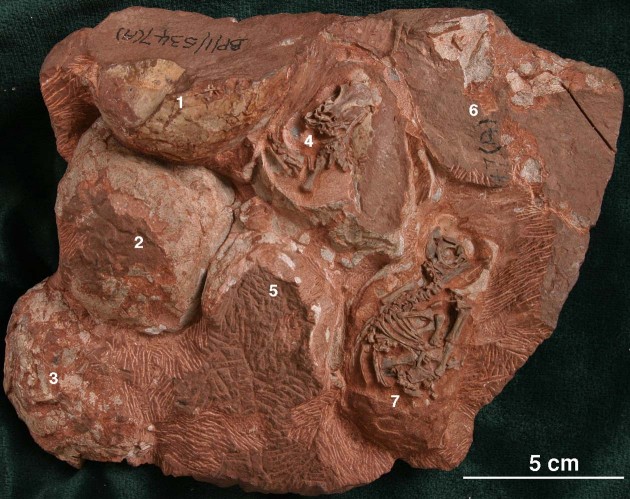 A fossil from the nesting site showing seven eggs, some with the embryos exposed.

The study reveals clutches of eggs, many with embryos, as well as tiny dinosaur footprints, providing the oldest known evidence that the hatchlings remained at the nesting site long enough to at least double in size.

At least 10 nests have been discovered at several levels at this site, each with up to 34 round eggs in tightly clustered clutches. The distribution of the nests in the sediments indicate that these early dinosaurs returned repeatedly (nesting site fidelity) to this site, and likely assembled in groups (colonial nesting) to lay their eggs, the oldest known evidence of such behavior in the fossil record.

The large size of the mother, at six meters in length, the small size of the eggs, about six to seven centimetrs in diameter, and the highly organized nature of the nest, suggest that the mother may have arranged them carefully after she laid them. 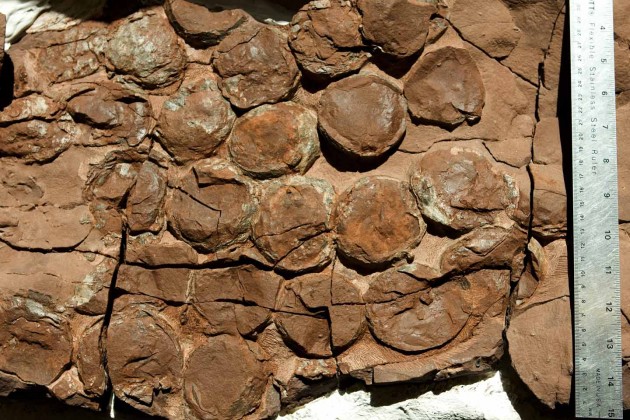 A nest of dinosaur eggs from the South African nesting site.

“The eggs, embryos, and nests come from the rocks of a nearly vertical road cut only 25 meters long,” Reisz says. “Even so, we found ten nests, suggesting that there are a lot more nests in the cliff, still covered by tons of rock. We predict that many more nests will be eroded out in time, as natural weathering processes continue.”

The fossils were found in sedimentary rocks from the Early Jurassic Period in the Golden Gate Highlands National Park in South Africa. This site has previously yielded the oldest known embryos belonging to Massospondylus, a relative of the giant, long-necked sauropods of the Jurassic and Cretaceous periods.

“This amazing series of 190 million year old nests gives us the first detailed look at dinosaur reproduction early in their evolutionary history, and documents the antiquity of nesting strategies that are only known much later in the dinosaur record,” says Evans.