When West Nile virus swept across the New York City region in 1999 and then, in subsequent years, across almost all of the continental United States, “people were finding dead crows and other birds all over the place,” says Peter Marra of the Migratory Bird Center at the Smithsonian Conservation Biology Institute. “We didn’t see the actual virus moving across the landscape, but we did see the devastation it caused through the remains of birds.”  The disease was passed from birds to humans primarily by the tiger mosquito.

Today, Marra is helping launch an Animal Mortality Monitoring Program (AMMP) in Africa sponsored by the United States Agency for International Development that will alert authorities to animal deaths—“mortality events”—that occur on a larger-than-normal scale. Known as AMMP, the network is intended to serve as an early warning system for emerging infectious diseases that can pass from animal populations into the human population. Recently, Marra and his collaborator Isabelle-Anne Bisson, a research associate at the Migratory Bird Center, took a few minutes to answer some questions about this new initiative. 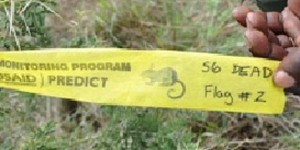 A flag representing “56 dead rats” set out during an animal mortality monitoring training workshop for park staff at the Queen Elizabeth Conservation Area in Uganda.

Q: What is the aim of the animal mortality monitoring program in Africa?

A: Marra: In cases of zoonotic diseases—such as West Nile virus and Avian Influenza which each began in animals and then jumped to humans—an epidemic of human sickness usually occurs after there’s already been a noticeable sickness in animals. By having local people keeping an eye out for sick and dead animals we think we have the potential to get an early warning on emerging zoonotic pathogens before they move to the human population. We want to have some sort of surveillance mechanism out there that is looking for sick and dead animals that have fallen victim to an emerging disease. This way we may catch a disease before it becomes a human epidemic. 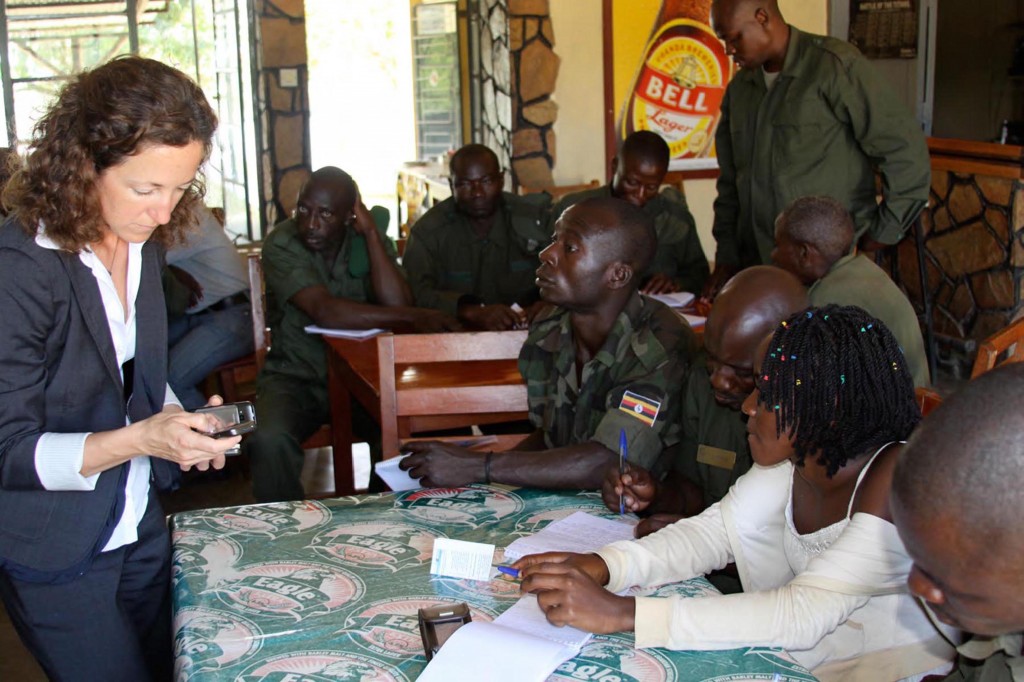 A: Marra: We are starting in Uganda because it, as well as other “hotspots” in Africa, tend to be places where you get a lot of zoonotic diseases occurring. In such areas there is a lot of mixing of things—people, domestic animals, wild animals—that don’t normally come together. People are hunting animals and eating wild game and there’s just a lot of human-animal interface. 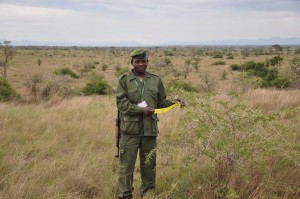 A park staff member finds the first flag set out by AMMP staff.

Once a pathogen emerges and disease begins to appear in hosts, given how much globalization is taking place today and how much trade there is all over the planet, an epidemic can move today in ways that we never would have predicted. The tiger mosquito that may have brought West Nile Virus to North America could have easily been transported on planes. There’s a lot of illegal trade in animals and food that goes on too. Every time you move an animal, legally or illegally, you not only move the animal but also move what is inside the animal—including pathogens and parasites. There are a lot of different factors that determine whether or not and how a pathogen can move.

Q: How is the AMMP network being launched?

A: Bisson: In April 2011 we launched the first pilot project in the Queen Elizabeth Conservation Area with the Uganda Wildlife Authority. Some 50 Nokia mobile phones were deployed. We started with an intensive month-long training program, which included several workshops where park staff learned how to use the phones and the mobile data collection application EpiSurveyor. The phone acts as a small mobile computer where staff can enter animal mortality events using EpiSurveyor while on field patrols. 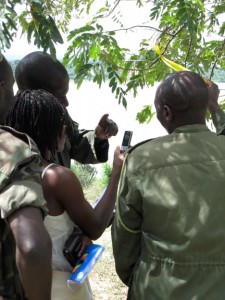 We next used “mock” dead animals by printing yellow flagging tapes that contained project logos and information the staff needed to enter once they found a flag. For example, a flag might say “56 dead rats.” We distributed more than 100 of these flags across the park tied to trees and recorded the GPS data for each flag.

When park staff found a flag, they entered its data into the cell phone and the phone also captured the flag’s GPS position. The data is sent to a central server via cellular networks and anyone with a computer, Internet connection and access to the account can view the data in real time.

Q: How did the park staff do finding the flags?

A: Bisson: From May to August park staff looked for the flags while on patrol and entered the data for the flags they found. From August to September we returned to Uganda to evaluate the training and practice and speak to park staff for feedback.

We heard a lot of stories about taking hours to find a single flag and their frustrations with the network, but all-in-all the feedback was positive—they love the phones and they love EpiSurveyor. One quarter of the flags were recovered of which 65 percent were entered correctly without missing data. Some flags were eaten by ants, others were destroyed by elephants, some disappeared mysteriously while a few had faded to a pale, imperceptible yellow. 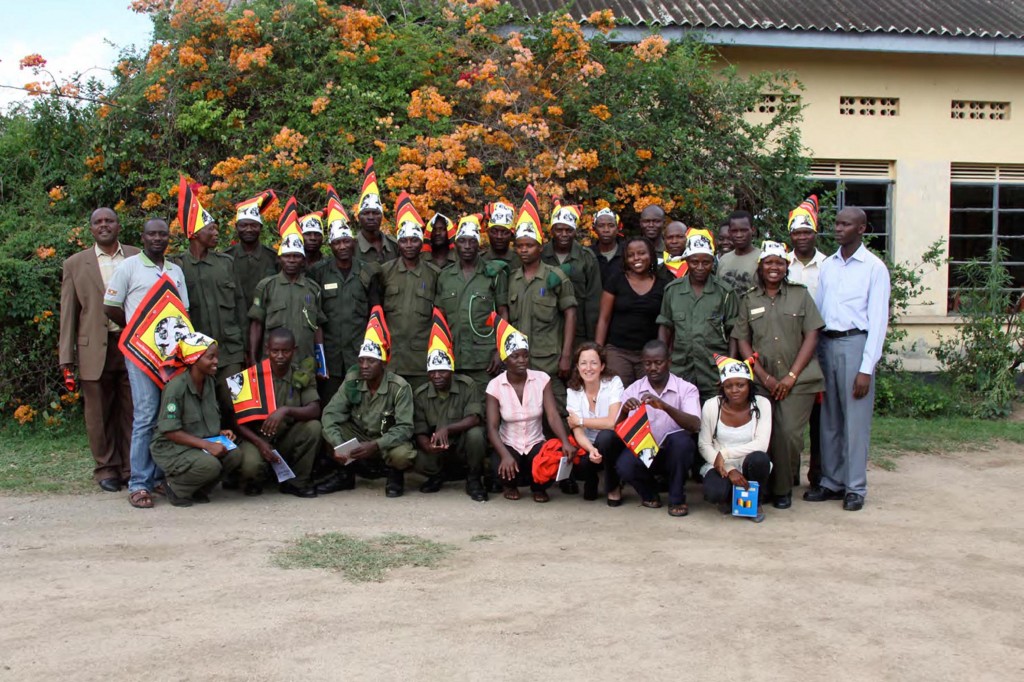 All-in-all the workshops exceeded our expectations. Queen Elizabeth Conservation Area staff are now ready to monitor real animal deaths and we plan to fully integrate the program into existing Uganda Wildlife Authority systems at the end of June 2012. We are also working on the development of a custom mobile phone data form application with a local company MindAfrica.

Q: What follows when a real mortality event is reported?

A: Marra: Another main AAMP partner is RESPOND, a project that links schools of public health and veterinary medicine in Africa with institutions in the United States to help strengthen their ability to identify and respond to outbreaks. Once a mortality event occurs an animal pathologist will come to the scene, someone say from the School of Veterinary Medicine at Makerere University in Uganda, and take samples of animal tissues and transport them to a lab for analysis.

These projects are part of a larger Emerging Pandemic Threats program overseen by USAID, which includes PREDICT, a program focused on responding to, identifying, preventing and preparing for emerging pandemic diseases.

Q: Other than national park staff what other groups will you be working with to establish an AMMP network?

Marra: Our goal now is to expand the program to people in the agricultural sector in Uganda—people with large and small farms, say down to only one cattle herd.

But on a larger scale, it is basically a sound idea to keep track of all animal mortality, period. AMMP is focused on emerging infectious diseases, but I have had a long-time interest in developing a central database for keeping track of and quantifying animal mortality. We don’t have anyone compiling these sort of data today…say how many birds and what species were killed by airplanes, how many birds and what species are killed by wind turbines…. There are all sorts of ways animal mortality data can be analyzed and actions we can take to minimize the impacts on birds and other animals and, thus, minimize the impacts on humans. Many places in the world are prime areas for a dead animal surveillance networks.