Cobia, a promising fish for aquaculture, lives throughout the world’s oceans except in the Central and Eastern Pacific. In August 2015, a large number of young fish escaped from offshore cages in Ecuador. Cobia have recently been reported from the Colombian and Panamanian Pacific coast, indicating their rapid spread from the release site. Voracious carnivores, cobia could have far-reaching impacts on fisheries and marine ecology in the Eastern Pacific, Smithsonian scientists warn.

Cobia (“Rachycentron canadum”), a large and potentially invasive fish species recently escaped from an aquaculture farm off of the Pacific Coast of Ecuador and appears to be moving north into the Central and Eastern Pacific, where it has never before been reported.

“The havoc caused by invasive Indo-Pacific lionfish throughout the Caribbean provides a compelling lesson about the strong adverse effects that alien marine fish can have on naïve ecosystems,” said D. Ross Robertson, staff scientist at the Smithsonian Tropical Research Institute.

“The extraordinary success of the lionfish in the Caribbean is due in large part to its being a type of predator with no near relatives or ecological analogs among the Caribbean fish fauna,” Robertson said. “As cobia is the only species in its family, which is most closely related to remoras or shark-suckers, it too represents an unusual type of predator for the tropical East Pacific, which only increases both the degree of uncertainty about its effects and the potential for major disruption of the area’s ecosystems.” 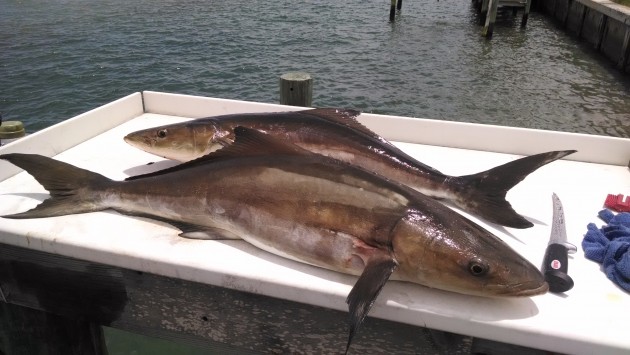 Cobia (Rachycentron canadum) are streamlined in shape with nearly smooth skin, brown above and white below, with a darker brown stripe on the side. Young fish have strong horizontal dark brown and white stripes. They attain a maximum length of two meters (78 inches) and maximum weight of 78 kilograms (172 pounds). They eat crustaceans (especially crabs), squid and fish. Cobia are also known as black kingfish, black salmon (although they are not related), ling, crabeater and several other names.

The species is found in warmer waters on both sides of the Atlantic, and throughout the Indian and Western Pacific Oceans. Cobia occur both offshore and in coastal waters and estuaries and are highly migratory. Eggs and larvae float among plankton, making them capable of spreading widely.

Cobia are considered to be an excellent food fish, with firm texture and good flavor. Although the species is relatively uncommon in most of its natural range, it has high potential for aquaculture due to its hardiness and exceptionally fast growth. Cobia are now being cultivated in Taiwan, Vietnam, China, the Philippines, Indonesia, Belize, Brazil and on Panama’s Caribbean Coast.

Many introduced or non-native species have little or no adverse effect on local ecosystems. However, some become invasive and harm native species via predation, competition or other negative effects. Although examples of invasive species are common in land and freshwater habitats, until recently there were no documented cases in marine environments. In the early 1990s, Indo-Pacific lionfish (Pterois sp.) were introduced to the Florida/Bahamas area, and have since spread throughout much of the Western Atlantic and Caribbean. Rapacious predators on shrimp and fishes and protected from being eaten by venomous spines, lionfish have produced dramatic changes in coral reef communities in their new range.

Fishermen, marine resources agencies and marine ecologists should be aware that cobia are now present in the Eastern Pacific and the potential deleterious effects they may have. While it is not yet certain that they will become established, their broad environmental tolerance and rapid growth make this a distinct possibility. Catches or sightings (verified with photographs) of cobia in Pacific waters should be noted and reported to D. Ross Robertson atdrr@stri.org.