Covered in venomous spines the exotic and strikingly banded Indo-Pacific lionfish would be a painful mouthful to any creature that may try to catch and eat it. Brought into the United States by aquarium hobbyists untold years ago, scientists believe a few of these fish were discarded live into the Atlantic off southern Florida sometime around the late 1980s. Now this voracious species is found as far north as Virginia and south to Venezuela. They are spreading still.

At the Smithsonian’s Tropical Research Institute in Panama, Andrew Sellers is turning this invasion into opportunity by examining just what Atlantic parasites are adopting the lionfish as a host. 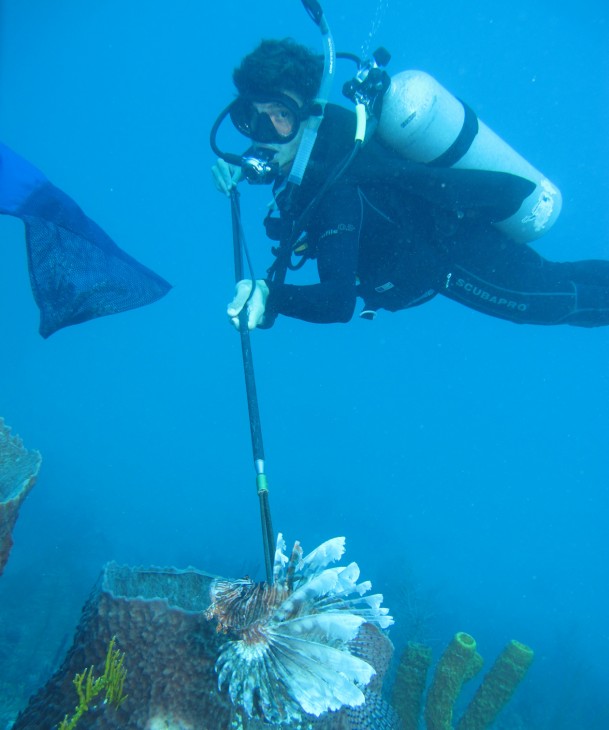 Andrew Sellers captures a large lionfish in Belize to take back to his laboratory for study.
(Photo by Edgardo Ochoa, dive officer at the Smithsonian Tropical Research Institute)

“Basically, I’m looking at how parasite abundance and diversity in the lionfish varies across latitudes,” Sellers explains.  “It has been suggested that invasive species don’t do as well in the tropics as they do in temperate areas, the theory being that stronger biotic interactions—competition for food, predators and parasitism—in the tropics may limit the success of an invasive species.

“As lionfish have spread so rapidly across such a broad lattudinal gradient, they make a very good model” says Sellers, who works in the Tropical Research Institute’s invasive species lab run by marine biologist Mark Torchin.

In addition to Panama, Sellers has traveled to Florida, Mexico and Belize catching lionfish and closely examining them to see what parasites are living on and inside their bodies. “For external parasites we’ve found—isopods and turbellaria, a flatworm that infects the gills. We have found that external parasites infecting the lionfish are more diverse at low latitudes,” he says.”

“Inside the fish we’ve found both trematodes [worms also known as flukes] and nematodes.” 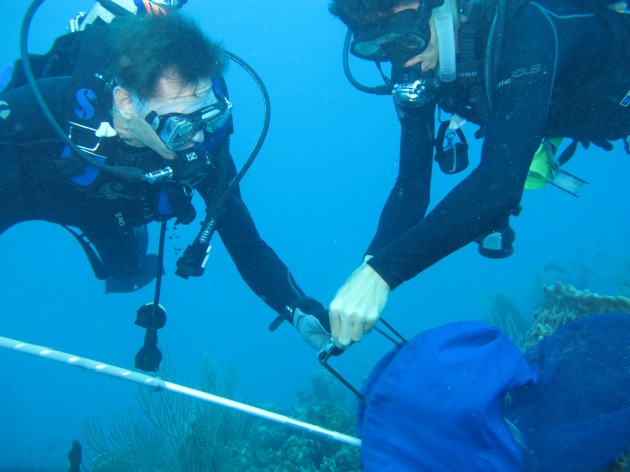 In his analysis Sellers examines and records the condition of each individual fish—size, weight, length—to see if the parasites are having any impact on their health.

“Overall, we are finding the abundance of parasites on the lionfish is pretty low, which is what we’d expect in an invasive species,” Sellers continues. 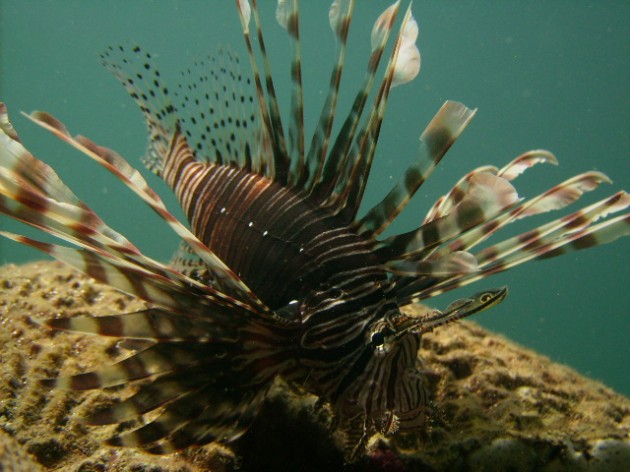 A lionfish in Bocas del Toro (Photo by Andrew Sellers)

Sellers also has begun looking into lionfish interactions with cleaner fish in the Caribbean. These small fish set up cleaning stations on brain coral heads where other fish—called client fish—congregate to have parasites removed from their bodies.

“What I am looking at is whether potential native competitors to lionfish are receiving a benefit from these cleaner fish that lionfish are not, i.e. parasite removal,” Sellers explains. “In general introduced species are believed to harbor fewer parasites than natives, however these cleaners may be affecting this imbalance by removing parasites from the native but not the invader.”

Female lionfish reproduce by laying a buoyant egg mass that is fertilized by a male, Sellers explains. The egg mass is then carried off into the ocean currents—a very effective method of dispersal. By 2005 people began seeing lionfish in the Bahamas. “We started seeing them in Panama about 2008, 2009,” Sellers says. “Now divers can find them everywhere along the coast from 0 to 300 feet down.” Cold water intolerance has limited their spread north along the coast of the United States to just below New York.

“Basically it appears the Atlantic coast of Central and South America is a pretty good place for these fish,” Sellers says. “It appears they have plenty of food, no enemies and few parasites.” –John Barrat