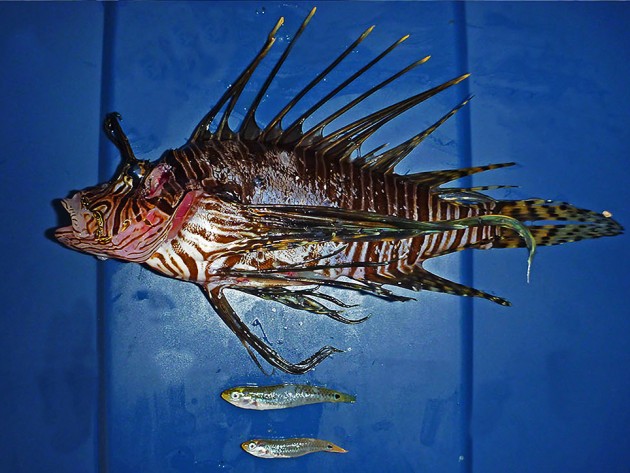 A lionfish shown with two mature female social wrasses, “Halichoeres socialis,”recovered from its stomach in Belize. (Photo by Luiz Rocha)

Scientists examining the stomach contents of invasive lionfish caught on the inner barrier reef of Belize have discovered that nearly half of the diet of these aggressive fish consists of a critically endangered fish known as the social wrasse (Halichoeres socialis).

The social wrasse is one of five coral reef fishes listed at the highest risk of extinction on the Red List of the International Union for Conservation of Nature. Found only on clear–water reefs around inshore mangrove islands in Belize, “its combination of traits—small size, schooling, and low, hovering behavior—make it an easy target for the lionfish,” says Smithsonian scientist Carole Baldwin of the Division of Fishes at the National Museum of Natural History in Washington, D.C. 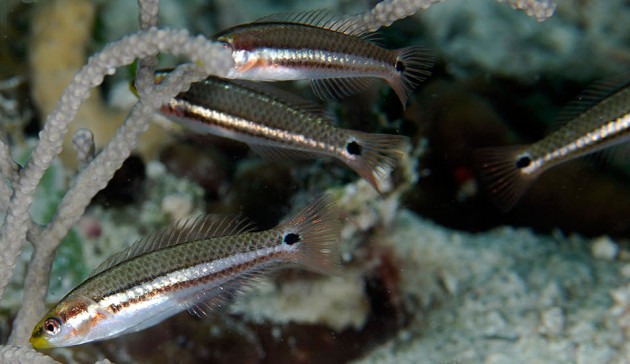 “The social wrasse is already under heavy stress from habitat destruction by development. Added pressure from lionfish predation may spell extinction for the social wrasse,” Baldwin and co-authors write in a recent article in the Journal of the International Society for Reef Studies. Other Caribbean fish species with traits similar to the social wrasse and limited ranges may face the same fate.

A Pacific fish popular in the aquarium trade, lionfish (Pterois volitans and P. miles) were introduced to the Atlantic in the mid-1990s. Today they are found along the U.S. Atlantic coast from Rhode Island to Florida, in the Bahamas and Gulf of Mexico and throughout the Caribbean. “Invasive lionfish are two to three times more effective at removing small native fishes than are native predators,” the scientists write. Lionfish are the latest in a long list of threats to Caribbean coral reefs, other threats include climate change, habitat destruction and pollution. 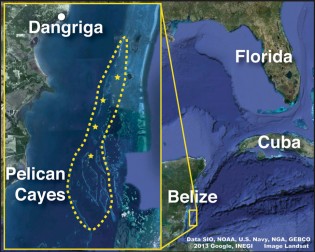 During their study the scientists speared 68 lionfish within the habitat range of the social wrasse and removed their stomachs. Of the 44 stomachs found to contain recently eaten fish, the scientists identified the consumed prey by morphology and through DNA analysis. Social wrasses represented 46 percent of the fishes found in lionfish stomachs, making them the primary prey item of the lionfish. One lionfish had 18 social wrasses in its stomach.

While the social wrasse lives only in shallow water, the lionfish is able to exploit deeper depths. For example, Baldwin is currently studying fish living in deep tropical reefs (as deep as 660 feet) off the coast of Curacao, and has encountered large numbers of lionfish eating native species there. “My worry is that they are decimating species of native fish that have yet to even be discovered,” she says. 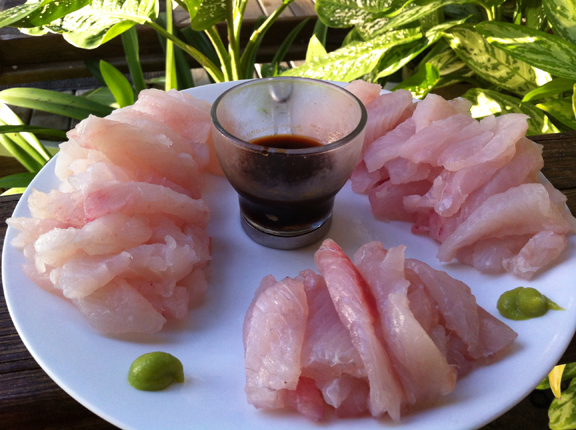 While the lionfish invasion of the Caribbean cannot be stopped, “targeted removals have reduced lionfish numbers in many areas,” the scientists write, mainly by divers seeking them for food. “Lionfish is delicious—cooked or as sushi/sashimi/ceviche—which lends hope to efforts that we will be able to control their numbers,” Baldwin explains.

Some fisherman want nothing to do with lionfish because of the potential of being stung by their neurotoxin-containing fin spines, which at a minimum cause hours of excruciating pain, Baldwin says. In rare cases a lionfish sting can cause paralysis and even death. 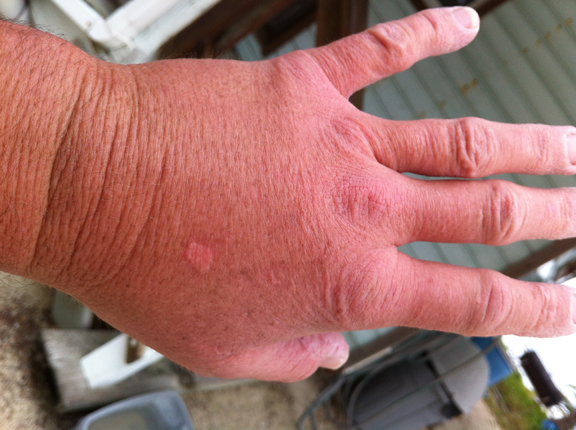 While conducting their study, Baldwin and co-author Luiz Rocha of the California Academy of Sciences, were stung “because we put speared lionfish into mesh bags while scuba diving, and venomous spines poking from the bag got us,” Baldwin explains. “Divers are now using lionfish containment devices, which are containers made with PVC pipe. Once you get the lionfish into the container, no worries.”

“On the whole, the social wrasse is just one brick in the wall we call biodiversity,” Baldwin says. The coral reef ecosystem “won’t crumble by removing one brick, but at some point if enough bricks are removed, it will.”