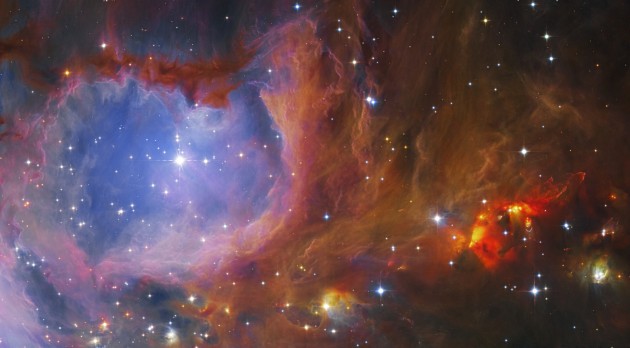 High resolution image of Messier 43 taken with the 6.5 meter Magellan telescope in Chile and the MMIRS, which sees into the near-infrared spectrum. (Image by Yuri Beletsky and Igor Chilingarian)

Recently crowned the “astronomy photo of the year” by Slate’s Bad Astronomy blog, a new image of a region of Orion’s belt reveals the deepest look yet into this part of space by piercing through a cloudy veil.

Composed by two astronomers, Igor Chilingarian, with the Smithsonian Astrophysical Observatory in Cambridge, Mass., and Yuri Beletsky with the Carnegie Observatories, who is also a well-known astrophotographer, the dreamscape image resulted from what was only supposed to be a test of a new instrument.

Mounted on the Magellan Clay Telescope at the Las Campanas Observatory in Chile, the Multiple Mirror Telescope (MMT) and Magellan Infrared Spectrograph (MMIRS) is an advanced imaging and spectroscopic tool that makes observations in infrared light. This means the camera is not restricted to what can be seen by the human eye, but can penetrate barriers like dust and clouds to reveal previously unseen detail.

Scheduling time with the telescope is difficult as it is in high demand by astronomers from around the world. Yet finding themselves with some precious extra hours, Chilingarian suggested they point the instrument at an area of the sky that had previously yielded some stunning space photos. Their target: two nebulae, M42 and M43, in the sword of Orion’s Belt that are part of a notorious star-forming region.

The researchers weren’t planning on making a big scientific splash; they merely wanted to put the camera through its paces.

This short video shows the difference between two images of Messier 43, the first taken by the Hubble Space Telescope and the second by the Magellan Clay Telescope and Magellan Infrared Spectrograph

“We wanted to take some pretty pictures to attract attention to the instrument we have,” Chilingarian recalls. “We didn’t think there was any particular research that could be carried out with it. We were mainly concerned with how to make observations and calibrate the data to reach this level of detail.”

Focused on a patch of sky that from our earthbound perspective takes up an area about half the size of the moon; MMIRS spent several hours over two days in 2012 peering at an exceptionally dusty area of space in the Orion Complex. This hotspot of star formation is hundreds of light-years across, parts of which can be seen with the naked eye or a good pair of binoculars. The complex holds nebulae, young stars and discs of forming planets; as seen by the human eye in the visible spectrum of light, these areas alternate between bright and dark zones.

The dark zones are areas where dust and gas–the stuff stars and planets are made of–obscure visible light. But they are no barrier to an infrared camera, which sees the hot clouds of gas as bright, hazy swirls. The camera also captures starlight from beyond the complex, revealing a glitzy panorama astronomers hadn’t seen before.

“You can see details that you can’t see with the Hubble space telescope,” Chilingarian adds. “This is the deepest observation anyone has ever made of the Orion star-forming region.”

With a bit of false coloration to distinguish the different formations and temperature zones, Beletsky stitched together two images into one cohesive mosaic, showing hot stars as white or blue, and cooler zones in red and orange. A crimson stain shaped like a butterfly shows jets of gas from protostellar objects—stars in the process of being born. 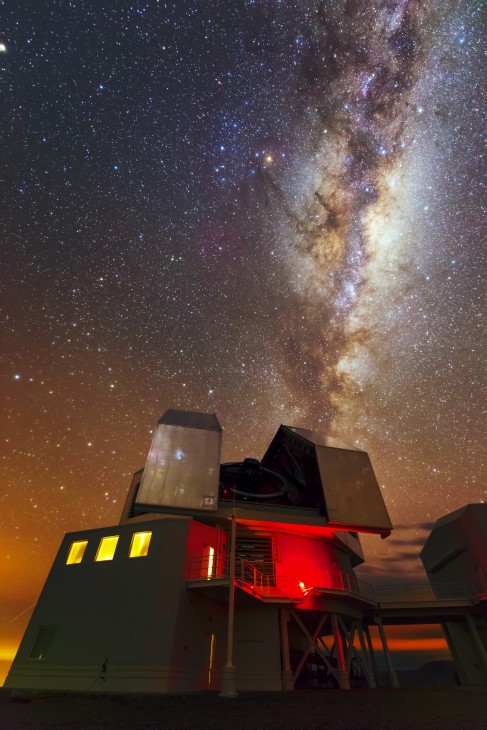 “The image quality is really excellent,” Chilingarian says.  “It’s a bit worse than the resolution from Hubble, but among the best images you can obtain from the ground. It’s the kind of picture that happens once every two decades, and there’s a lot of noise in the community about it.”

Ironically, the image went unnoticed by science for several years. Prints adorned the walls of offices at Carnegie headquarters in Pasadena, Calif., Harvard-Smithsonian Center for Astrophysics in Massachusetts, and at the Las Campanas Observatory in Chile–mere decorations, until Beletsky decided to finish retouching the photo. He submitted it to a popular online space photography board, NASA’s Astronomy Picture of the Day, where it was immediately posted.

“My colleagues in Cambridge contacted me a few days later, amazed by the quality of the image,” Chilingarian says. “We’d never used this photo for any type of scientific research, but the people who work in star formation were really excited about the dataset we collected along with the observations we made to create this picture.”

MMIRS was moved back to the MMT Observatory at Mt. Hopkins, Arizona, in March of 2015 after a five-year stint in Chile, and will begin making its first scientific observations starting in September.

“We’ll probably get some more nice pictures like this, and we should get some good scientific data as well,” Chilingarian adds.