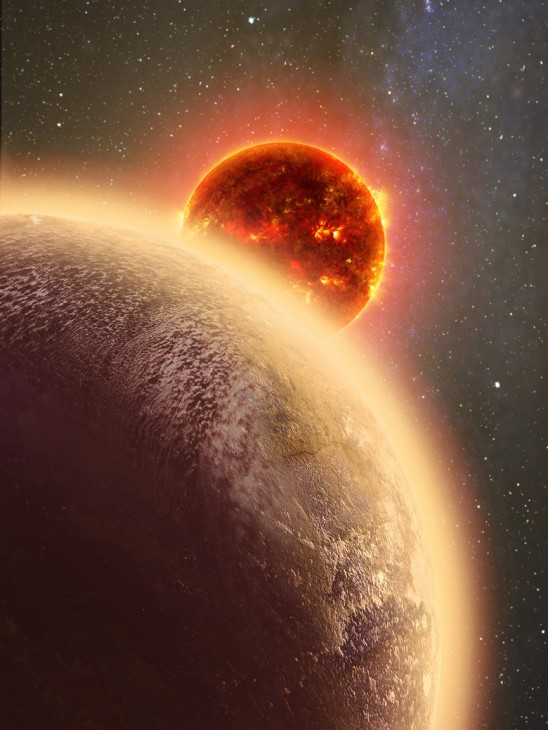 In this artist’s conception GJ 1132b, a rocky exoplanet very similar to Earth in size and mass, circles a red dwarf star. GJ 1132b is relatively cool, about 450 degrees F, and could potentially host an atmosphere. (Image by Dana Berry)

The collection of rocky planets orbiting distant stars has just grown by one, and the latest discovery is the most intriguing one to date. The newfound world, although hot as an oven, is cool enough to potentially host an atmosphere. If it does, it’s close enough (only 39 light-years away) that we could study that atmosphere in detail with the Hubble Space Telescope and future observatories like the Giant Magellan Telescope.

“Our ultimate goal is to find a twin Earth, but along the way we’ve found a twin Venus,” says astronomer David Charbonneau of the Harvard-Smithsonian Center for Astrophysics (CfA). “We suspect it will have a Venus-like atmosphere too, and if it does we can’t wait to get a whiff.”

“This planet is going to be a favorite target of astronomers for years to come,” adds lead author Zachory Berta-Thompson of the Massachusetts Institute of Technology (MIT).

GJ 1132b, as the planet is known, orbits a red dwarf star only one-fifth the size of our Sun. The star is also cooler and much fainter than the Sun, emitting just 1/200th as much light. GJ 1132b circles its star every 1.6 days at a distance of 1.4 million miles (much closer than the 36-million-mile orbit of Mercury in our solar system). 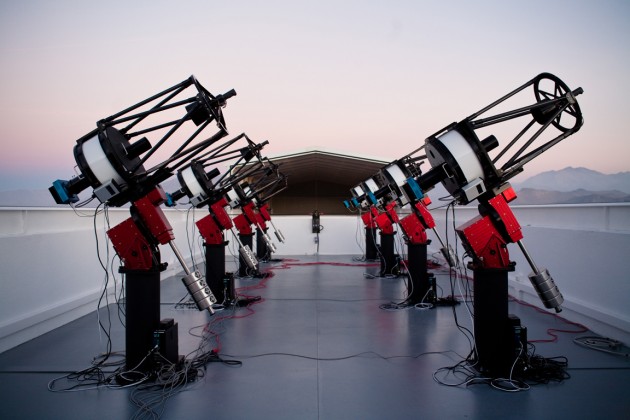 The MEarth-South telescope array, located on Cerro Tololo in Chile, searches for planets by monitoring the brightness of nearby, small stars. This photograph shows the array, comprising eight 40-cm telescopes, at twilight. (Photo by Jonathan Irwin)

As a result, GJ 1132b is baked to a temperature of about 450 degrees Fahrenheit. Such temperatures would boil off any water the planet may have once held, but still allows for the presence of an atmosphere. It is also significantly cooler than any other exoplanet confirmed to be rocky. In comparison, well-known worlds like CoRoT-7b and Kepler-10b possess scorching temperatures of 2,000 degrees F or more.

GJ 1132b was discovered by the MEarth-South array, which is dedicated to the hunt for terrestrial worlds orbiting red dwarf stars. MEarth-South consists of eight 40-cm robotic telescopes located at the Cerro-Tololo Inter-American Observatory in Chile.

MEarth-South monitors several thousand red dwarf stars located within 100 light-years of Earth. It looks for planets that transit, or cross in front of their host stars. When a planet transits its star, the star’s light dims by a small but detectable amount. This dimming gives an indication of the planet’s physical size.

After MEarth-South detected a transit in real time, additional observations were gathered by the array and the Magellan Clay telescope in Chile. The team also measured the host star’s gravitational wobble using the HARPS spectrograph to determine the planet’s mass.

They found that GJ 1132b is 16 percent larger than Earth, with a diameter of about 9,200 miles. It has a mass 60 percent greater than Earth. The resulting density indicates that the planet has a rocky composition similar to Earth.

The planet also has an Earth-like force of gravity. A person standing on the surface of GJ 1132b would weigh only about 20 percent more than they do on Earth.

Since the red dwarf star is small, the relative size of the planet to the star is larger than it would be for a Sun-like star. This, combined with the star’s close distance, makes it easier to detect and study any planetary atmosphere, should one exist. The team has requested follow-up observations with the Hubble and Spitzer Space Telescopes. Future observatories like the James Webb Space Telescope also will undoubtedly take a close look at GJ 1132b.

A final intriguing possibility is that GJ 1132b has sister planets that have not yet been detected. The research team plans to examine this system closely for signs of siblings.

The discovery is reported in a paper published in the November 12, 2015 issue of the journal Nature.