This animation shows how binary neutron stars warp space-time to create gravitational waves, then collide and explode into a visible kilonova, which can be detected by astronomers. It then pulls back to show the observatory in Chile that houses the Dark Energy Camera.

Marking the beginning of a new era in astrophysics, scientists have detected gravitational waves and electromagnetic radiation, or light, from the same event for the first time. This historic discovery reveals the merger of two neutron stars, the dense cores of dead stars, and resolves the debate about how the heaviest elements such as platinum and gold were created in the Universe.

To achieve this remarkable result, thousands of scientists around the world have worked feverishly using data from telescopes on the ground and in space. Researchers at the Harvard-Smithsonian Center for Astrophysics (CfA) in Cambridge, Mass., have played a pivotal role. A series of eight papers led by CfA astronomers and their colleagues detail the complete story of the aftermath of this event and examine clues about its origin. 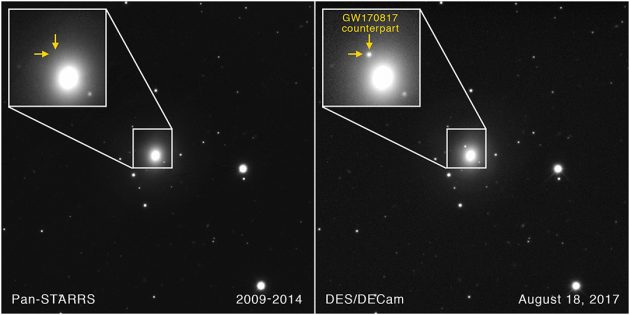 “It’s hard to describe our sense of excitement and historical purpose over the past couple of months,” said the leader of the team, CfA’s Edo Berger. “This is a once in a career moment — we have fulfilled a dream of scientists that has existed for decades.”

Gravitational waves are ripples in space-time caused by the accelerated motion of massive celestial objects. They were first predicted by Einstein’s General Theory of Relativity. The Advanced Laser Interferometer Gravitational-Wave Observatory (LIGO) made the first direct detection of gravitational waves in September 2015, when the merger of two stellar-mass black holes was discovered.

“Imagine that gravitational waves are like thunder. We’ve heard this thunder before, but this is the first time we’ve also been able to see the lightning that goes with it,” said Philip Cowperthwaite of the CfA. “The difference is that in this cosmic thunderstorm, we hear the thunder first and then get the light show afterwards.”

A few hours after the announcement, as night set in Chile, Berger’s team used the powerful Dark Energy Camera on the Blanco telescope to search the region of sky from which the gravitational waves emanated. In less than an hour, they located a new source of visible light in the galaxy NGC 4993 at a distance of about 130 million light years.

“One of the first giant galaxies we looked at had an obvious new source of light popping right out at us, and this was an incredible moment,” said Matt Nicholl of the CfA. “We thought it would take days to locate the source but this was like X marks the spot.”

The CfA team and collaborators then launched a series of observations that spanned the electromagnetic spectrum from X-rays to radio waves to study the aftermath of the neutron star merger.

In their set of papers, the CfA scientists report their studies of the brightness and spectrum of the optical and infrared light and how it changed over time. They show that the light is caused by the radioactive glow when heavy elements in the material ejected by the neutron star merger are produced in a process called a kilonova.

“We’ve shown that the heaviest elements in the periodic table, whose origin was shrouded in mystery until today are made in the mergers of neutron stars,” said Edo Berger. “Each merger can produce more than an Earth’s mass of precious metals like gold and platinum and many of the rare elements found in our cell phones.”

The material observed in the kilonova is moving at high speeds, suggesting that it was expelled during the head-on collision of two neutron stars. This information, independent of the gravitational wave signature, suggests that two neutron stars were involved in GW170817, rather than a black hole and a neutron star.

Radio observations with the Very Large Array in New Mexico helped confirm that the merger of the two neutron stars triggered a short gamma-ray burst (GRB), a brief burst of gamma rays in a jet of high-energy particles. The properties match those predicted by theoretical models of a short GRB that was viewed with the jet initially pointing at a large angle away from Earth. Combining the radio data with observations from NASA’s Chandra X-ray Observatory shows that the jet pointed about 30 degrees away from us.

“This object looks far more like the theories than we had any right to expect,” said the CfA’s Kate Alexander who led the teams’ VLA observations. “We will continue to track the radio emission for years to come as the material ejected from the collision slams into the surrounding medium,” she continued.

An analysis of the host galaxy, NGC 4993, and the environment of the cataclysmic merger shows that the neutron star binary most likely formed more than 11 billion years ago.

“The two neutron stars formed in supernova explosions when the universe was only two billion years old, and have spent the rest of cosmic history getting closer and closer to each other until they finally smashed together,” said Peter Blanchard of the CfA.

A long list of observatories was used to study the kilonova, including the SOAR and Magellan telescopes, the Hubble Space Telescope, the Dark Energy Camera on the Blanco, and the Gemini-South telescope.

The series of eight papers describing these results appeared in the Astrophysical Journal Letters on October 16th. The four papers with first authors from CfA are led by Philip Cowperthwaite about the changes with time of light from the kilonova, one led by Matt Nicholl about the changes with time of the kilonova’s spectrum, another led by Kate Alexander about the VLA observations, and another led by Peter Blanchard about how long the merger took to unfold and the properties of the host galaxy.

Graphics and other additional information on this result can be found at https://www.kilonova.org.