Almost 14 billion years ago, the universe we inhabit burst into existence in an extraordinary event that initiated the Big Bang. In the first fleeting fraction of a second, the universe expanded exponentially, stretching far beyond the view of our best telescopes. All this, of course, was just theory.

Researchers from the BICEP2 collaboration today announced the first direct evidence for this cosmic inflation. Their data also represent the first images of gravitational waves, or ripples in space-time. These waves have been described as the “first tremors of the Big Bang.” Finally, the data confirm a deep connection between quantum mechanics and general relativity.

The tiny temperature fluctuations of the cosmic microwave background (shown here as color) trace primordial density fluctuations in the early universe that seed the later growth of galaxies. These fluctuations produce a pattern of polarization in the CMB that has no twisting to it. Gravitational waves from inflation are expected to produce much a fainter pattern that includes twisting (“B-mode”) polarization, consistent with the B-mode polarization pattern observed by BICEP2, which is shown here as black lines. The line segments show the polarization strength and orientation at different spots on the sky.

“Detecting this signal is one of the most important goals in cosmology today. A lot of work by a lot of people has led up to this point,” said John Kovac (Harvard-Smithsonian Center for Astrophysics), leader of the BICEP2 collaboration.

These groundbreaking results came from observations by the BICEP2 telescope of the cosmic microwave background – a faint glow left over from the Big Bang. Tiny fluctuations in this afterglow provide clues to conditions in the early universe. For example, small differences in temperature across the sky show where parts of the universe were denser, eventually condensing into galaxies and galactic clusters. 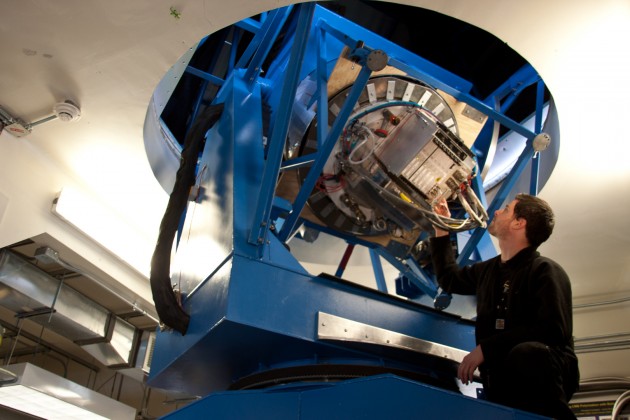 “Our team hunted for a special type of polarization called ‘B-modes,’ which represents a twisting or ‘curl’ pattern in the polarized orientations of the ancient light,” said co-leader Jamie Bock (Caltech/JPL).

Gravitational waves squeeze space as they travel, and this squeezing produces a distinct pattern in the cosmic microwave background. Gravitational waves have a “handedness,” much like light waves, and can have left- and right-handed polarizations. 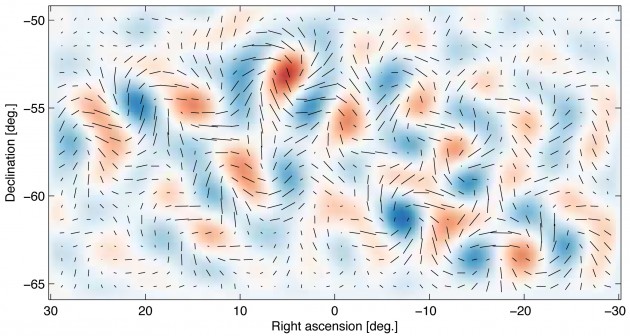 Gravitational waves from inflation generate a faint but distinctive twisting pattern in the polarization of the cosmic microwave background, known as a “curl” or B-mode pattern. For the density fluctuations that generate most of the polarization of the CMB, this part of the primordial pattern is exactly zero. Shown here is the actual B-mode pattern observed with the BICEP2 telescope, which is consistent with the pattern predicted for primordial gravitational waves. The line segments show the polarization strength and orientation at different spots on the sky. The red and blue shading shows the degree of clockwise and anti-clockwise twisting of this B-mode pattern.

The team examined spatial scales on the sky spanning about one to five degrees (two to ten times the width of the full Moon). To do this, they traveled to the South Pole to take advantage of its cold, dry, stable air.

“The South Pole is the closest you can get to space and still be on the ground,” said Kovac. “It’s one of the driest and clearest locations on Earth, perfect for observing the faint microwaves from the Big Bang.”

They were surprised to detect a B-mode polarization signal considerably stronger than many cosmologists expected. The team analyzed their data for more than three years in an effort to rule out any errors. They also considered whether dust in our galaxy could produce the observed pattern, but the data suggest this is highly unlikely. 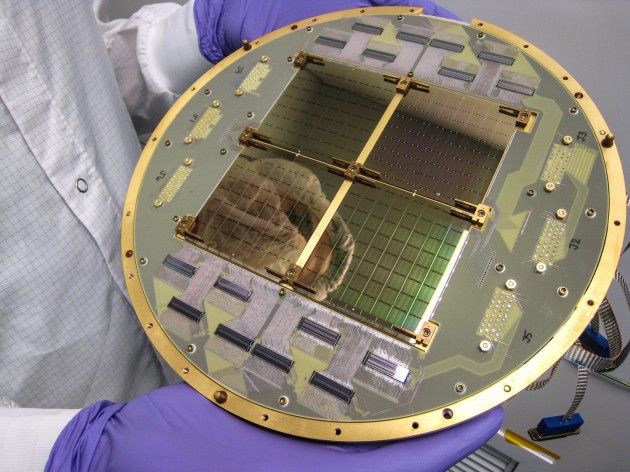 “This has been like looking for a needle in a haystack, but instead we found a crowbar,” said co-leader Clem Pryke (University of Minnesota).

When asked to comment on the implications of this discovery, Harvard theorist Avi Loeb said, “This work offers new insights into some of our most basic questions: Why do we exist? How did the universe begin? These results are not only a smoking gun for inflation, they also tell us when inflation took place and how powerful the process was.”

BICEP2 is the second stage of a coordinated program, the BICEP and Keck Array experiments, which has a co-PI structure. The four PIs are John Kovac (Harvard), Clem Pryke (UMN), Jamie Bock (Caltech/JPL), and Chao-Lin Kuo (Stanford/SLAC). All have worked together on the present result, along with talented teams of students and scientists. Other major collaborating institutions for BICEP2 include the University of California at San Diego, the University of British Columbia, the National Institute of Standards and Technology, the University of Toronto, Cardiff University, and Commissariat à l’Energie Atomique.

Scientists are using the universe as a “cosmological collider”