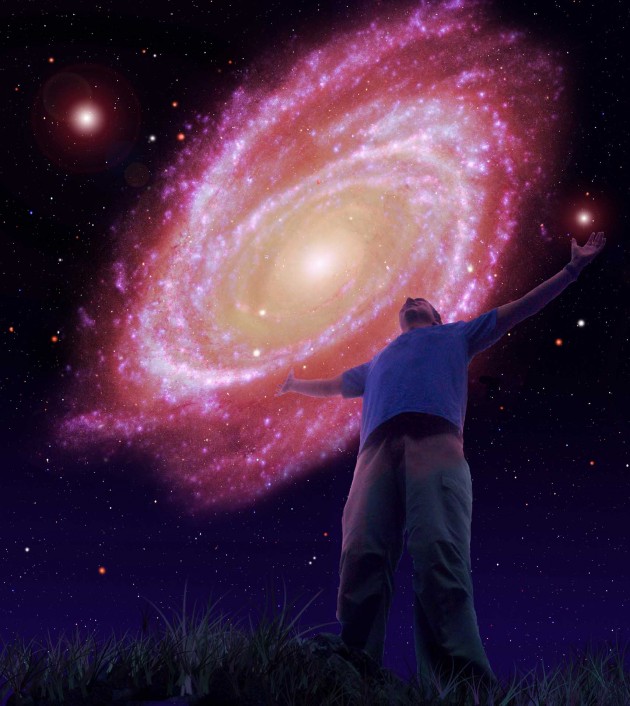 Artist’s conception of the cosmic view a trillion years from now. (Credit: David A. Aguilar)

One trillion years from now, an alien astronomer in our galaxy will have a difficult time figuring out how the universe began. They won’t have the evidence that we enjoy today.

Edwin Hubble made the first observations in support of the Big Bang model. He showed that galaxies are rushing away from each other due to the universe’s expansion. More recently, astronomers discovered a pervasive afterglow from the Big Bang, known as the cosmic microwave background, left over from the universe’s white-hot beginning.

In a trillion years, when the universe is 100 times older than it is now, alien astronomers will have a very different view. The Milky Way will have merged with the Andromeda galaxy to form the Milkomeda galaxy. Many of its stars, including our Sun, will have burned out. The universe’s ever-accelerating expansion will send all other galaxies rushing beyond our “cosmic horizon,” sending them forever out of view.

The same expansion will cause the cosmic microwave background to fade out, stretching the wavelength of CMB photons to become longer than the visible universe. Without the clues of the CMB and distant, receding galaxies, how will far-future astronomers know the Big Bang happened? According to Harvard theorist Avi Loeb, clever astronomers in 1 trillion C.E will need to use the most distant light source available to them – hypervelocity stars flung from the center of Milkomeda. 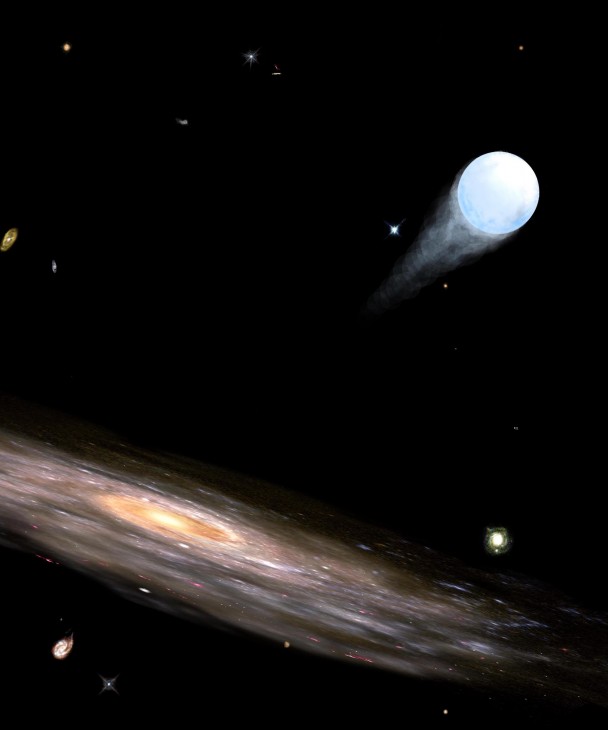 This artist’s conception shows an “exiled” star that was flung from the galactic center millions of years ago. The star is speeding out of the Milky Way at more than one million miles per hour. Five exiled stars now are known, making them a new class of objects known as hypervelocity stars. (Credit: Ruth Bazinet)

“We used to think that observational cosmology wouldn’t be feasible a trillion years from now,” says Loeb, who directs the Institute for Theory and Computation at the Harvard-Smithsonian Center for Astrophysics. “Now we know hypervelocity stars will allow Milkomeda residents to learn about the cosmic expansion and reconstruct the past.”

About once every 100,000 years, a binary-star system wanders too close to the black hole at our galaxy’s center and gets ripped apart. One star falls into the black hole while the other is flung outward at a speed greater than 1 million miles per hour – fast enough to be ejected from the galaxy entirely.

Finding these hypervelocity stars is more challenging than spotting a needle in a haystack, but future astronomers would have a good reason to hunt diligently. Once they get far enough from Milkomeda’s gravitational pull, these stars will get accelerated by the universe’s expansion. Astronomers could measure that acceleration with technologies more advanced than we have today. This would provide a different line of evidence for an expanding universe, similar to Hubble’s discovery but more difficult due to the very small effect being measured.

By studying stars within Milkomeda, they could infer when the galaxy formed. Combining that information with the hypervelocity star measurements, they could calculate the age of the universe and key cosmological parameters like the value of the cosmological constant (the lambda in LCDM).

“Astronomers of the future won’t have to take the Big Bang on faith. With careful measurements and clever analysis, they can find the subtle evidence outlining the history of the universe,” Loeb says.

This research appears in a paper accepted for publication in the Journal of Cosmology and Astroparticle Physics and available online.