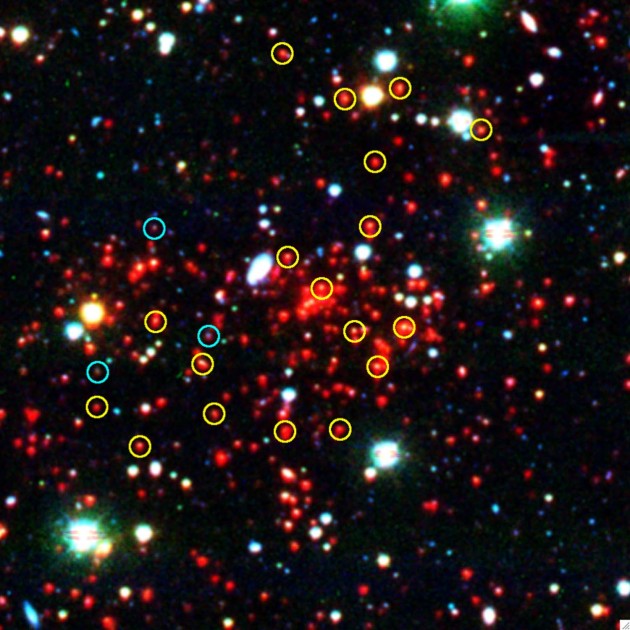 Astronomers using the South Pole Telescope report that they have discovered the most massive galaxy cluster yet seen at a distance of 7 billion light-years. The cluster (designated SPT-CL J0546-5345) weighs in at around 800 trillion Suns, and holds hundreds of galaxies.

“This galaxy cluster wins the heavyweight title. It’s among the most massive clusters ever found at this distance,” said Mark Brodwin, a Smithsonian astronomer at the Harvard-Smithsonian Center for Astrophysics. Brodwin is first author on the paper announcing the discovery, which appeared in the Astrophysical Journal.

Redshift measures how light from a distant object has been stretched by the universe’s expansion. Located in the southern constellation Pictor (the Painter), the cluster has a redshift of z=1.07. This puts it at a distance of about 7 billion light-years, meaning we see it as it appeared 7 billion years ago, when the universe was half as old as now and our solar system didn’t exist yet.

Even at that young age, the cluster was almost as massive as the nearby Coma cluster. Since then, it should have grown about four times larger. If we could see it as it appears today, it would be one of the most massive galaxy clusters in the universe. 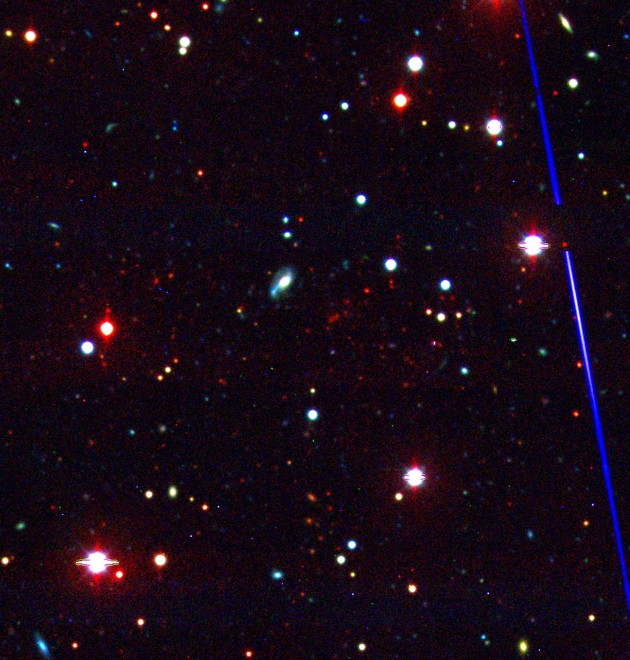 This optical image of the newfound galaxy cluster highlights how faint and reddened these galaxies are due to their great distance. The cluster remained hidden until the South Pole Telescope spotted it by looking for distortions in the cosmic microwave background. (Image courtesy CTIO Blanco 4-m telescope/J. Mohr)

“This cluster is full of ‘old’ galaxies, meaning that it had to come together very early in the universe’s history – within the first two billion years,” stated Brodwin.

Galaxy clusters like this can be used to study how dark matter and dark energy influenced the growth of cosmic structures. Long ago, the universe was smaller and more compact, so gravity had a greater influence. It was easier for galaxy clusters to grow, especially in areas that already were denser than their surroundings.

“You could say that the rich get richer, and the dense get denser,” quipped Harvard astronomer Robert Kirshner, commenting on the study.

As the universe expanded at an accelerating rate due to dark energy, it grew more diffuse. Dark energy now dominates over the pull of gravity and chokes off the formation of new galaxy clusters.

Brodwin and his colleagues spotted their quarry in the first 200 square degrees of data collected from the new South Pole Telescope. The SPT is currently completing its pioneering millimeter-wave survey of a huge swath of sky covering 2,500 square degrees. 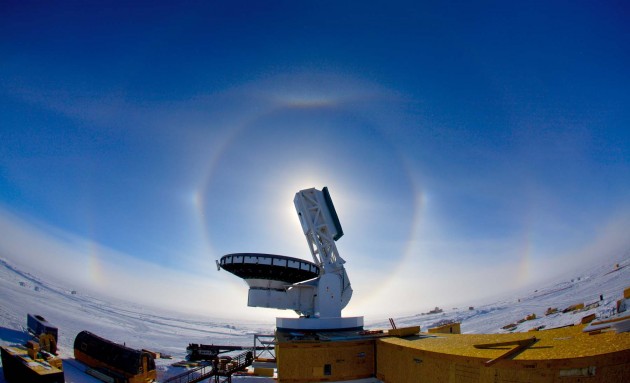 They’re hunting for giant galaxy clusters using the Sunyaev-Zel’dovich effect – a small distortion of the cosmic microwave background (a pervasive all-sky glow left over from the Big Bang). Such distortions are created as background radiation passes through a large galaxy cluster.

Surveying for this effect has significant advantages over other search techniques. It works just as well for very distant clusters as for nearby clusters, which allows astronomers to find very rare, distant, massive clusters. Further, it provides accurate measurements of the masses of these clusters, which are crucial to unraveling the nature of dark energy.

The main goal of the SPT survey is to find a large sample of massive galaxy clusters in order to measure the equation of state of the dark energy, which characterizes cosmic inflation and the accelerated expansion of the universe. Additional goals include understanding the evolution of hot gas within galaxy clusters, studying the evolution of massive galaxies in clusters, and identifying distant, gravitationally lensed, rapidly star-forming galaxies.

Once this distant cluster was found, the team studied it with the Infrared Array Camera on the Spitzer Space Telescope to pinpoint galaxies within the cluster. Detailed observations of the galaxies’ speeds with the Magellan telescopes in Chile proved that the galaxy cluster was a heavyweight.

The team expects to find many more giant galaxy clusters lurking in the distance once the South Pole Telescope survey is completed.

“After many years of effort, these early successes are very exciting. The full SPT survey, to be completed next year, will rewrite the book on the most massive clusters in the early universe,” added Brodwin.