Move over Matrix, astronomers have done you one better. They have created the first realistic virtual universe using a computer simulation called “Illustris.” Illustris can recreate 13 billion years of cosmic evolution in a cube 350 million light-years on a side with unprecedented resolution.

“Until now, no single simulation was able to reproduce the universe on both large and small scales simultaneously,” says lead author Mark Vogelsberger (MIT/Harvard-Smithsonian Center for Astrophysics), who conducted the work in collaboration with researchers at several institutions, including the Heidelberg Institute for Theoretical Studies in Germany.

These results are being reported in the May 8th issue of the journal Nature.

Previous attempts to simulate the universe were hampered by lack of computing power and the complexities of the underlying physics. As a result those programs either were limited in resolution, or forced to focus on a small portion of the universe. Earlier simulations also had trouble modeling complex feedback from star formation, supernova explosions, and supermassive black holes. 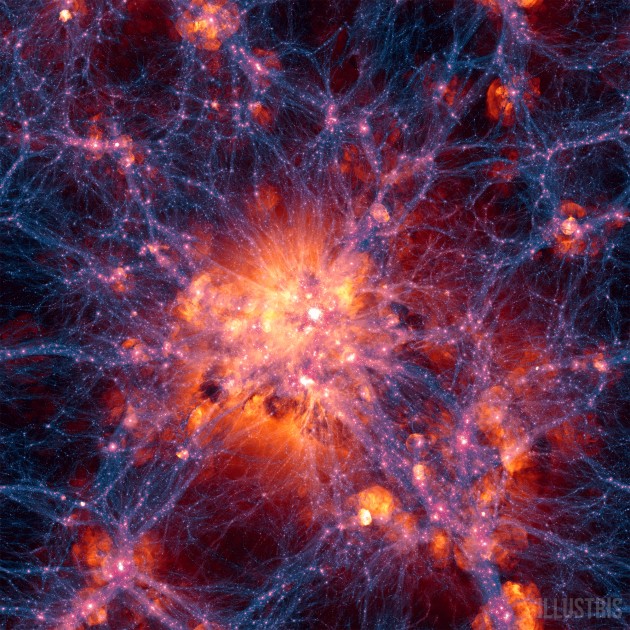 This still frame from the Illustris simulation is centered on the most massive galaxy cluster existing today. The blue-purple filaments show the location of dark matter, which attracts normal matter gravitationally and helps galaxies and clusters to clump together. Bubbles of red, orange and white show where gas is being blasted outward by supernovae or jets from supermassive black holes. (NASA / Illustris Collaboration)

Illustris employs a sophisticated computer program to recreate the evolution of the universe in high fidelity. It includes both normal matter and dark matter using 12 billion 3-D “pixels,” or resolution elements.

The team dedicated five years to developing the Illustris program. The actual calculations took 3 months of “run time,” using a total of 8,000 CPUs running in parallel. If they had used an average desktop computer, the calculations would have taken more than 2,000 years to complete. 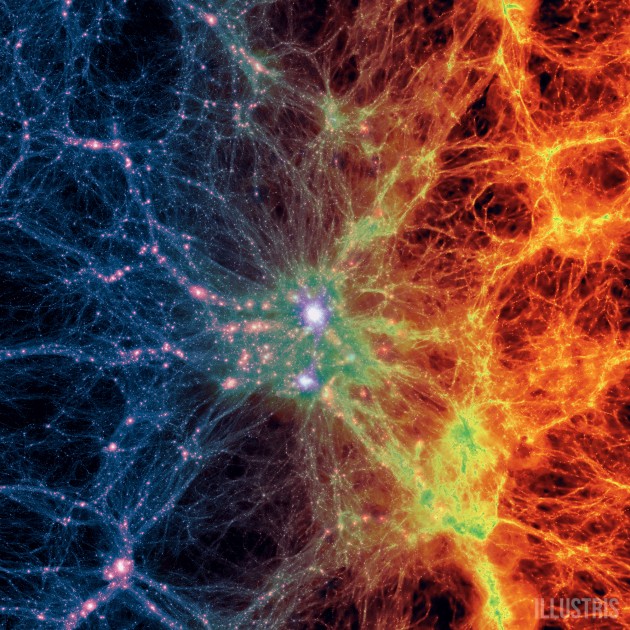 This composite image from the Illustris simulation is centered on the most massive galaxy cluster existing today. It morphs from concentrations of dark matter (at left in blue and purple) to normal matter made mostly of hydrogen and helium gas (at right in red, orange and yellow). (Illustris Collaboration)

The computer simulation began a mere 12 million years after the Big Bang. When it reached the present day, astronomers counted more than 41,000 galaxies in the cube of simulated space. Importantly, Illustris yielded a realistic mix of spiral galaxies like the Milky Way and football-shaped elliptical galaxies. It also recreated large-scale structures like galaxy clusters and the bubbles and voids of the cosmic web. On the small scale, it accurately recreated the chemistries of individual galaxies.

Since light travels at a fixed speed, the farther away astronomers look, the farther back in time they can see. A galaxy one billion light-years away is seen as it was a billion years ago. Telescopes like Hubble can give us views of the early universe by looking to greater distances. However, astronomers can?t use Hubble to follow the evolution of a single galaxy over time. 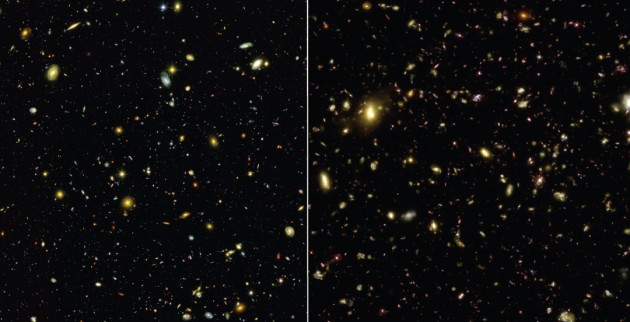 These visible-light images compare an actual photograph of the sky (left) taken with the Hubble Space Telescope to a simulated view (right) generated by the Illustris simulation. The simulation accurately reproduces the sizes, types, and colors of galaxies in the universe. (Illustris Collaboration)

“Illustris is like a time machine. We can go forward and backward in time. We can pause the simulation and zoom into a single galaxy or galaxy cluster to see what’s really going on,” says co-author Shy Genel of the CfA.