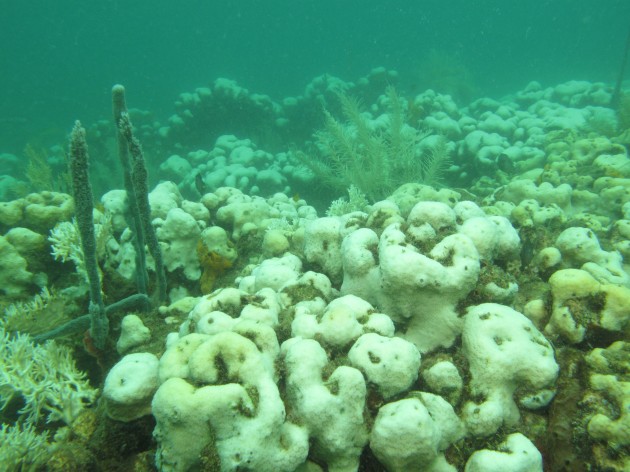 Bleached coral off the coast of Panama.

A new study by Florida State University and Smithsonian Institution biologists shows that bleaching events brought on by rising sea temperatures are having a detrimental long-term impact on coral.

Bleaching—a process where high water temperatures or UV light stresses the coral to the point where it loses its symbiotic algal partners that provides the coral with color—is also affecting the long-term fertility of the coral the scientists reveal in the latest issue of Marine Ecology Progress Series.

Most corals reproduce by releasing sperm and eggs into the ocean during brief annual spawning events. The chance of sperm finding and fertilizing an egg depends on corals spawning in close proximity and in synchrony with each other.

“The remarkable finding from this study was that the reduction in spawning persisted for three additional years, long after the corals had regained their symbiotic partners and regained their normal appearance,” says Levitan, chair of the Department of Biological Sciences at Florida State. “Even corals that didn’t bleach aren’t reproducing at the levels they should.”

The worldwide decrease in coral abundance in combination with long-term reductions in spawning and reproduction following bleaching events put reef- building corals in a difficult situation. Eggs might be released, but never fertilized. And that could have a major impact on the ecosystem at large.

Levitan and other researchers been studying coral just off the coast of Panama since 1996. Since then, those corals have been exposed to two bleaching events. On average, it takes coral three to four years to recover from bleaching.

“Even if we can fix what’s killing these corals, it’s going to be hard for coral populations to recover, because the surviving corals might not successfully produce enough offspring to repopulate reefs,” Levitan said.

Coral reefs provide protection and shelter for many different species of fish. Without the reefs, certain fish are left homeless and without an area to reproduce. They also protect coastlines from large waves and flooding, a major issue in areas that are prone to tropical storms or hurricanes.