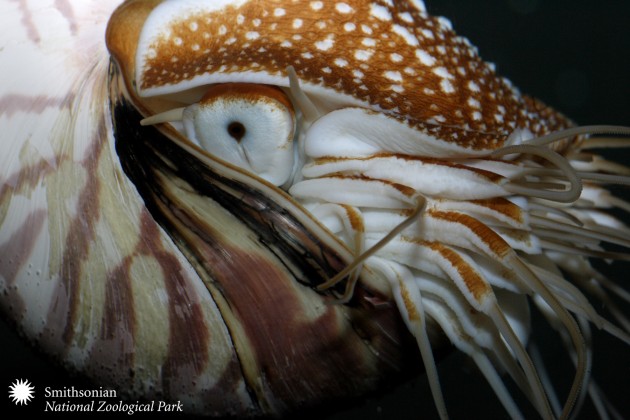 The shell of this nautilus at the Smithsonian’s National Zoo clearly shows the deformity–area characterized by black bands–that started after it began living in an aquarium. (Photo by Mehgan Murphy)

In the wild, wide milk chocolate-brown stripes adorn the beautiful smooth, white shells of the chambered nautilus, a deep-diving mollusk from the Indo-Pacific Ocean. But when placed in an aquarium, the new surfaces of shell these animals produce become thick, rough and stripped with a black substance. Why this ugly deformity occurs is a mystery that aquarists have puzzled over since the 1970s.

“We wondered if they are not getting something in their diet in aquaria or if something in the water is not available to them,” explains Alan Peters, a curator at the Smithsonian’s National Zoo in Washington, D.C.  “Aquarists have long known that in an aquarium the normal pattern of the nautilus’ shell never fully returns.” 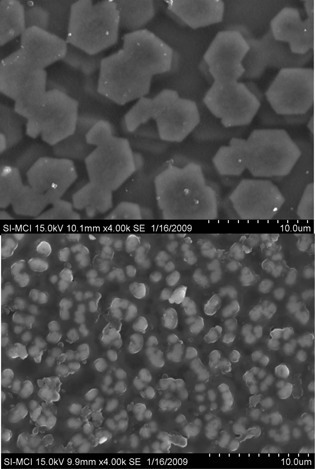 Calling upon a variety of scientific techniques, including stable isotope mass spectronomy, scanning electron microscopy, micro X-ray fluorescence and X-ray diffraction, a team of researchers including Peters recently took a close look at this shell deformity. Using the shells of nautiluses that had first lived in the ocean and then been placed in an aquarium they carefully examined and compared the chemical and physical structure of portions of both the old and new shell.

What they first found under a scanning electron microscope was that the crystalline structure of aquarium-formed shell was less ordered, poorly defined and without a clearly defined shape or form.

Next, chemical analysis revealed that the black deposits in aquarium-produced shell contain excess amounts of copper, zinc and bromide and decreased amounts of calcium and magnesium.

High amounts of copper, zinc and bromide “point to the role that proteins play in the construction of the shell,” and do not appear related to diet or tank-water chemistry, Peters and colleagues write in a recent paper in the journal Zoo Biology.

When a nautilus is removed from its natural environment and placed in an aquarium, it experiences “environmental stress such as changed pressure, temperature and ultraviolet light patterns.” That may trigger an attempt to reinforce their aquarium-formed shell, compensating for a weakened crystalline structure. 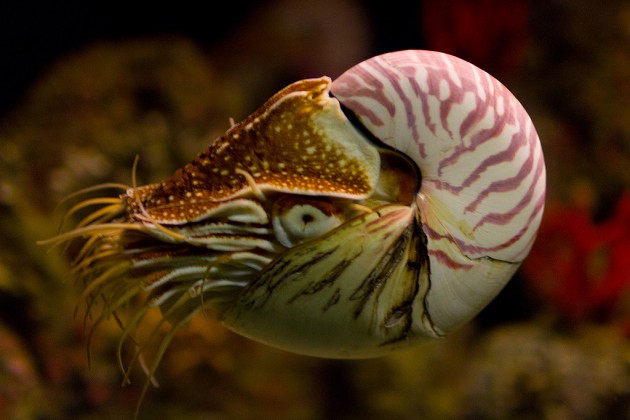 The shell of this aquarium-living nautilus clearly shows the difference between its wild-produced and captive-produced shell. (Flickr photo by Michael Bentley)

In the end, the scientists were unable to reach a conclusion as to just what what causes a nautilus shell to deform in an aquarium. “We have all kinds of theories,” Peters says “but so far we are unable to confirm any of them.” The researchers next plan to conduct experiments measuring the impact of temperature and light on the production of black areas of shell, as well as the function of proteins in wild vs. captive  shell production.

Nautiluses appeared on earth about 500 million years ago during the Cambrian Explosion—they were jet-propelling themselves through ancient seas 265 million years before dinosaurs inhabited the Earth. They have remained mostly unchanged for millions of years.

Today the animals are characterized by experts as being on the “knife-edge” of extinction, overfished across their range because of their beautiful shells. A recent survey by the U.S. Fish and Wildlife Service disclosed that the U.S. imports some 100,000 nautilus shells each year. Their numbers in the Philippines have dropped by 80 percent since the 1980s. International trade sanctions against the capture and trade of the nautilus are virtually nonexistent.