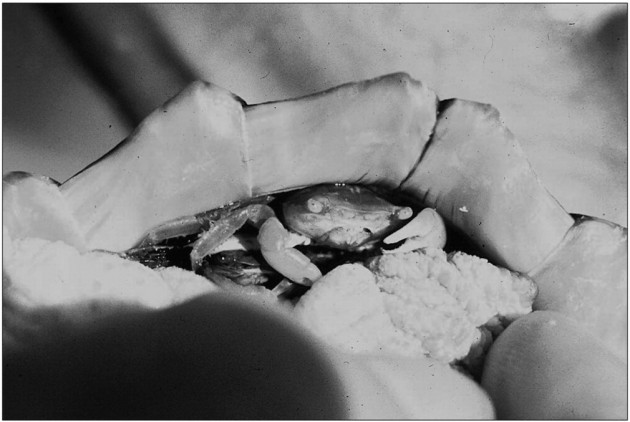 A heterosexual pair of “Planes major” crabs hiding in the space beneath the shell and above the tail of a juvenile loggerhead sea turtle (“Caretta caretta”). The turtle’s tail has been pulled aside to show the crabs. (Photo courtesy of Ricardo Santos)

In theory, crabs of the species Planes major should stay true to their mates for life. Heterosexual pairs of these small crustaceans live on loggerhead sea turtles, tucked snugly in the tiny space between a turtle’s tail and its shell. By sharing this small refuge with a member of the opposite sex the problem of finding a mate is solved. Normally only one male and one female crab are found on a turtle, hitching a ride as the turtle navigates the ocean.

Marine turtles are not abundant in the immense sea, so they represent a scarce resource the crabs need to stay alive. Both male and female readily defend their turf on a host turtle, for to fall off in the open ocean means certain death. These small crabs are not strong swimmers and represent a nice snack for predatory fish.

Now, a new study suggests the male crabs are less prone than originally thought to stay with their mating partners for long periods, and readily switch mates when the opportunity arises. When exactly they switch and how is a real puzzle. The study is published in the Journal of Experimental Marine Biology and Ecology.

Just going for a stroll on a sea turtle’s shell is “risky behavior,” explains study co-author Antonio Baeza of the Department of Biological Sciences at Clemson University and the Smithsonian Marine Station at Fort Pierce, Fla.

“We don’t know how long it takes for a crab to find another turtle, and thus another mate,” explains Baeza, who researches the behavioral ecology and mating behavior in ocean organisms. “Somehow, somewhere, the males are switching between turtle hosts, most probably in search of new females.”

While jumping to another turtle may earn a male a new mate, a battle to the death with another male reluctant to give up his mate and home might first ensue.

Scientists reached their conclusion by describing the symbiotic association between crabs and turtles, including the comparison of the body size of paired crabs found on hundreds of turtles studied in Japan, Mexico, Peru and Brazil. Previous research has shown that animals that stay together in the same refuge and display monogamous behavior for long periods have bodies that are very similar in size. Body-size data collected from P. major crabs during the study did not support evidence of extended monogamy.

The scientists also found a relatively high percentage of females with eggs and also solitary males that were living alone on turtles. This evidence again suggests roaming behavior by males, although the same behavior by females cannot be ruled out, Baeza observes.

“At certain times during the year loggerhead turtles gather for feeding and to mate,” Baeza says. “It may be during these times the crabs find an opportunity to jump to another turtle.”

P. major crabs are also frequently found living on flotsam in the ocean, so they may jump off and onto a mass of floating debris, drifting in the ocean currents until once again, if ever, they are presented with an opportunity for a long, monogamous voyage with a new mate.