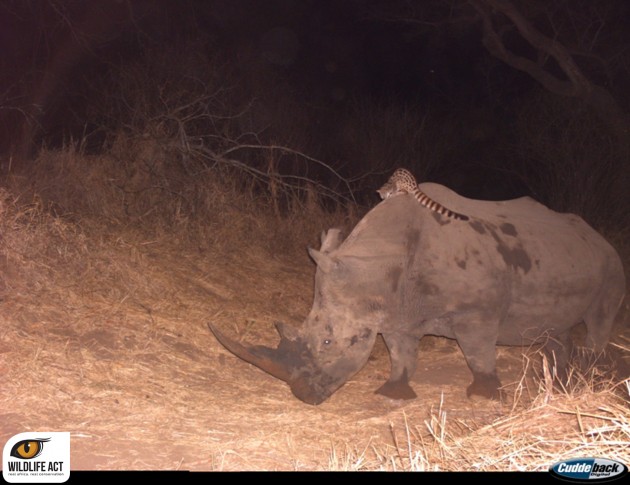 When some of the world’s largest mammals come your way, most animals steer clear. Not the genet. The small cat-like carnivore was captured on film riding around on the back of both a rhino and buffalo earlier this month in South Africa’s Hluhluwe-iMfolozi Park. Conservationists were very surprised when they reviewed photos snapped by their camera trap showing this hitchhiking behavior never seen in the mammal before.

Small carnivore expert Adam Ferguson from the Smithsonian’s National Museum of Natural History spoke to Smithsonian Science to give his thoughts on this strange new behavior.

Do you have any ideas as to why genets might be riding rhinos?

This is certainly the first time I, or indeed anyone I know working on genets, have seen this behavior before. The first thing that came to my mind when I saw these images were maybe it is a behavior to escape predators.

Genets have many predators. They are quite small animals and any larger carnivore like a lion, leopard or even a wild dog will certainly make a meal out of them. Usually their defense strategy is to climb up in a tree or onto something like a large boulder to avoid predators. If there was no other suitable escape route maybe a rhino or buffalo would make a good alternative to get out of harms reach.

They are very agile creatures and I think they could probably jump up on the back of a rhino or buffalo before it could even react. The fact that it is able to sit on the back of these large animals for some time though is very unusual. 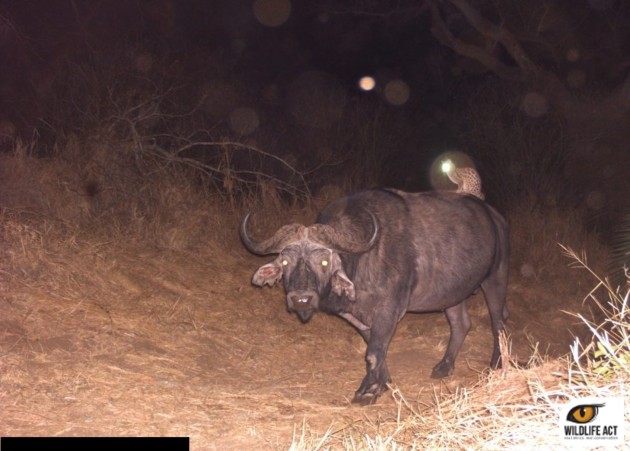 Could the genet be climbing on these large animals looking for food?

It’s possible but unlikely. Genets are rodent specialists, making up 60-70% of their diet. They are however opportunistic feeders, so they will also eat shrews, insects and fruits. They could possibly be searching for ecto-parasites like ticks, which are commonly found on large mammals like rhinos and buffalo, but I think it is unlikely they would be climbing on such dangerous animals to find such a small food item. The risk of being kicked off or hurt wouldn’t make it worth their while. They sometimes hunt birds as well but tick-feeding birds like oxpeckers, commonly seen on rhinos and buffalo, wouldn’t be feeding on these large mammals at night.

I did see an interesting idea proposed that the genet could be riding on the backs of these animals to hunt rodents that are flushed out of the vegetation by the large and cumbersome rhinos and buffalos. Being that high up certainly could give them a better vantage point for doing this I suppose. 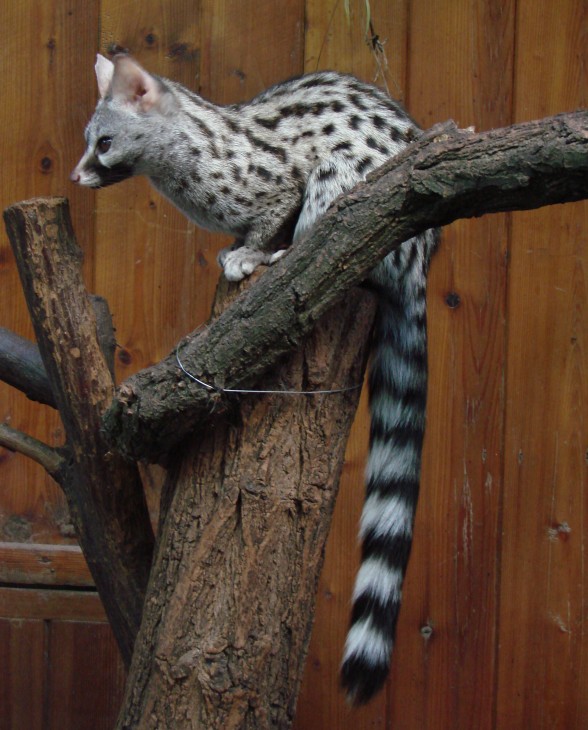 How would we find out why genets are doing this?

I think it is a really unique behavior and the fact the genet has been seen riding on two very large species makes it interesting. We would first need to figure out if it is only just this one individual genet that has this behavior or not. It would be cool to see if other genets are doing this by using camera traps elsewhere. Each individual genet has its own pattern of spots, so using cameras would make it very easy to tell individuals apart.

We would also want to see whether this behavior is only found in this species or multiple genet species. There are 14-17 species (depending on which expert you ask) of genet in Africa, with only one species extending into southern Europe. Two of these species, the common genet and the large-spotted genet, I am currently working on in East Africa. 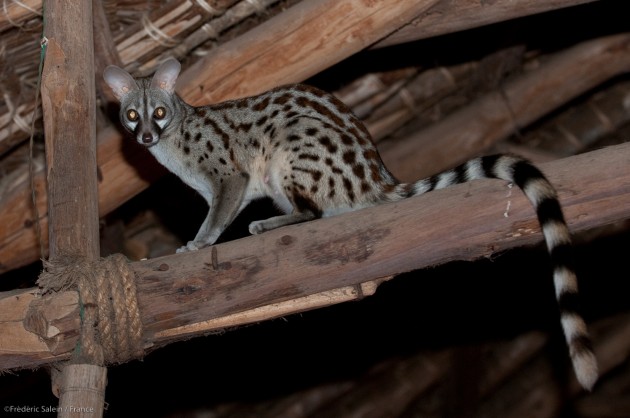 Ferguson is currently researching the effects of human land-use practices in East Africa on the behavior, physiology and immune systems of genets.