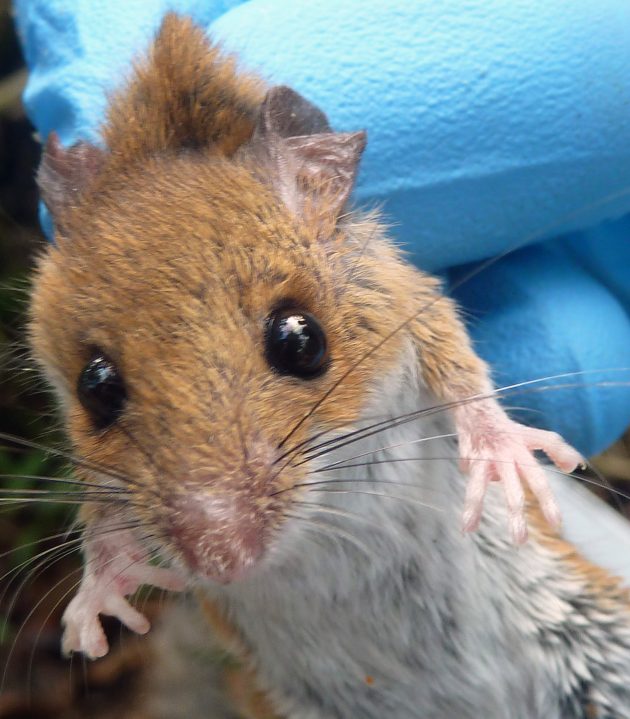 A harvest mouse captured and released during a Smithsonian sponsored mammal survey of coffee plantations in Mexico in 2014. (Photo by Amanda Caudill)

Finding a mouse in your morning coffee might give you an unwelcome jolt, but there’s a strong connection between small mammals, birds and the plantations where coffee beans are grown that was the recent focus of a year long-study in Mexico.

Grown without chemical fertilizers or pesticides in the shade of diverse species of predominantly native trees, coffee certified to Smithsonian standards as “Bird Friendly®” supports a healthy ecosystem and provides critical habitat for resident and migratory birds. Now, researchers have found, shaded, organic farms where bird-friendly coffee is grown can also supply an important refuge for an array of small mammals, says Amanda Caudill, a postdoctoral fellow at the Smithsonian Conservation Biology Institute who conducted the study. In addition, this shade growing method may be applicable to producers of other crops like cacao, rice and grapes, making their farms more biodiverse.

Caudill worked last year with Robert Rice of the Smithsonian’s Migratory Bird Center to analyze data she collected in the Chiapas coffee-growing region of Mexico throughout 2014. Her investigation was sparked by an observation during her midtown Manhattan commute, that people everywhere were drinking massive amounts of coffee every day. How much of this coffee, she wondered, carried a “green” certification, and how much of the higher price tag actually went to benefit habitat and wildlife? 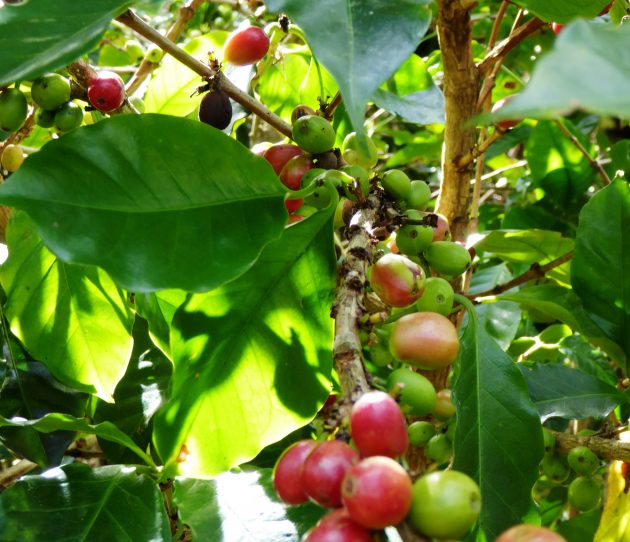 The ‘coffee bean’ is the seed of the coffee cherry—a fruit that can take 3-4 years to produce after a coffee tree is planted. Once they are bright red, the fruit is ripe for the picking. (Photo by Amanda Caudill)

Caudill’s Mexico research (which builds on previous work she conducted in Costa Rica and India) adds more data to a thinly studied aspect of sustainable coffee growing: how native mammals are affected by coffee farm management. Small mammals are tough to study, not only because they are tiny and elusive, but because different species within the same habitat use resources in very different ways. This means researchers must look in a range of places to get a good cross section of who’s living where.

“There’s hardly any mammal research done. It almost all focuses on birds and insects,” Caudill says about coffee plantation studies. “Mammal work is physically very labor intensive. We wanted to know that if you can say [bird-friendly shade coffee habitat] is good for birds, does that also apply to mammals?” 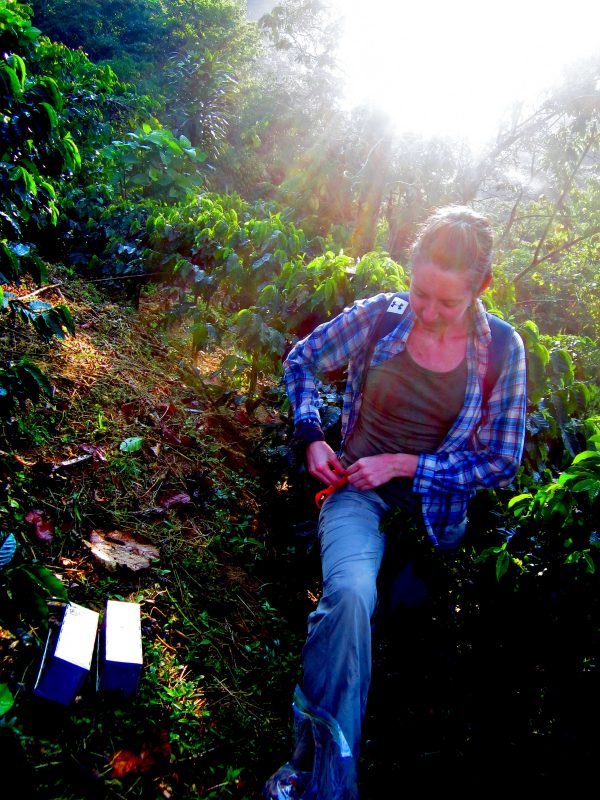 Compared to sun coffee and conventional shade coffee farms, bird-friendly coffee plantations are deeply shaded by native tree species and a mix of under-story growth that occurs alongside the coffee plants. On the other hand, the practices for growing sun coffee, and conventional shade-grown coffee to a lesser extent, cause soil erosion and compaction, and use fertilizers and pesticides that run off into streams and contaminate groundwater.

Throughout all the habitats she studied, Caudill found a wide range of animals: from predators like the jaguarundi, omnivores including coatis, gray foxes, raccoons and opossums, tiny forest deer called red brockets, and rodents of every size, from the lowland paca to the naked-eared deer mouse. Bird-friendly coffee groves had, on average, greater numbers of individual animals, particularly small rodents, and a higher variety of species than conventional shade coffee or sun coffee plantations. 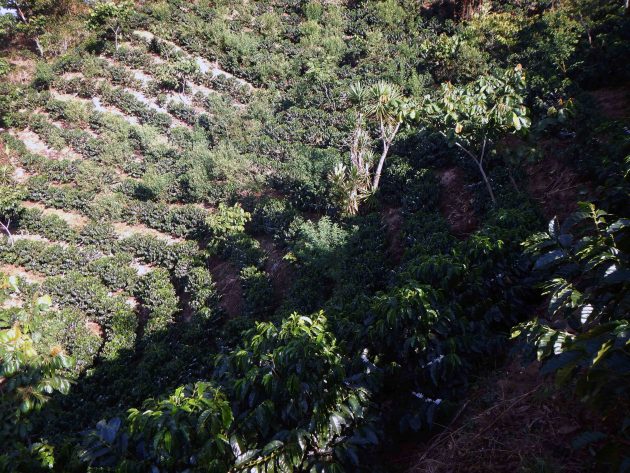 The sun shines brightly on a hillside coffee plantation in Mexico where researchers surveyed mammals in 2014. (Amanda Caudill photo)

“In these fragmented landscapes that don’t have much forested area left, wildlife use these coffee farms and habitats as a refuge,” Caudill says. Smaller mammals in particular have tiny home ranges, and can’t travel like birds to find better resources, she noted.

Caudill, now an instructor at the Earth Institute Center for Environmental Sustainability at Columbia University, added that understanding how mammals use their habitats and how large mammals benefit from greater connectedness between suitable habitats can help farmers plan their farming approach to benefit a greater variety of animals.

The Migratory Bird Center’s Rice added that for the most part, coffee growers who currently participate in the Smithsonian bird-friendly certification do it because they feel it makes a positive difference. 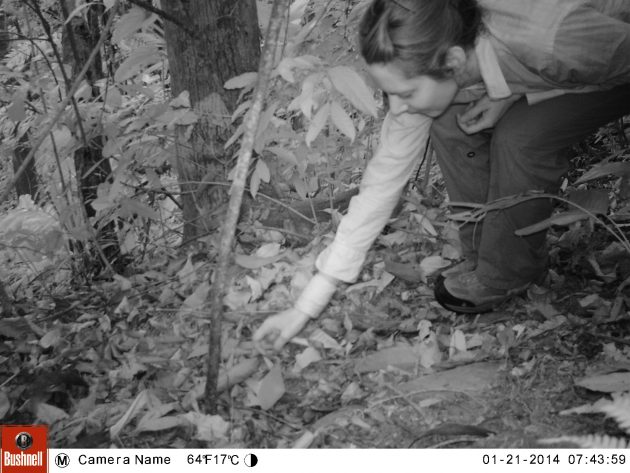 Amanda Caudill sets out a bait to attract mammals to a spot where their image can be snapped by a camera trap. The images were used during a 2014 survey of mammals living on coffee plantations in Mexico. (Image courtesy Amanda Caudill image)

“It does vary depending on their overall weltanschauung [world view], whether they see themselves as Aldo Leopolds or Henry Thoreaus and how they protect their piece of the earth,” Rice says. “For some it’s for economic reasons, but most of the people on these bird-friendly farms like being able to say that their coffee is also good habitat.”

At present, 1,225 growers on approximately 14,000 acres are certified as Smithsonian Bird Friendly. Together they produce more than 11 million pounds of exportable, ready-to-roast green coffee, Rice says.

One novel finding is that areas that had more small- to medium-height plants, from several inches to three feet in height, had greater species abundance. Caudill suggests that this, in addition to prohibiting chemical herbicides on certified bird-friendly coffee farms, may be important factors that help a greater diversity of mammals thrive. Rice added that it could be something he and his colleagues may recommend to farmers in the future interested in making their farms beneficial to more animals than just birds.

A coatamundi, a predatory mammal, darts between rows of coffee plants on a plantation in Mexico. (Photo courtesy Amanda Caudill)

“High bird diversity in any kind of habitat is a pretty good indicator of overall environmental and ecological health,” Rice observes. “But this study has helped us understand that there are specific things we could tweak to make it more than just bird-friendly.”

He also noted that Caudill’s work supports growing inquiries by growers of other products about the availability of a sustainable habitat certification—but more work is needed.

“We’ve been thinking that what we’ve successfully developed for coffee could be applied to other crops,” Rice says. “People ask us about cacao, about grapes in vineyards, about rice fields, for ways to manage them that are more conducive for birds. There’s a whole host of crops to which the ‘bird-friendly’ habitat label could be applied.”