Even tiny crustaceans scuttling across the deepest, darkest depths of the ocean floor will feel the effects of climate change, according to a new study published in the journal Global Ecology and Biogeography. “The deep sea is so remote and so very, very cold that we wondered if it too will be impacted by climate change,” explains Gene Hunt, a paleobiologist at the Smithsonian’s National Museum of Natural History in Washington, D.C. “Our research shows the answer is yes.” 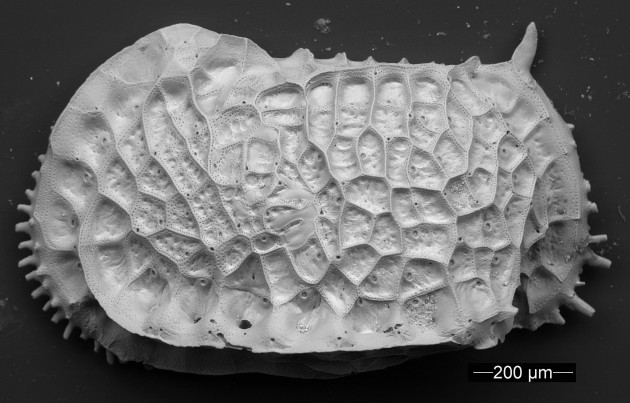 This is a scanning electron microscope image of the shell of a deep-sea Ostracoda (Crustacea). The excellent fossil record of microscopic ostracod fossils in the deep ocean was used to estimate past biodiversity changes in a recent study by scientists based in Hong Kong, the United States and Norway. They determined that even ecosystems in the deepest ocean will feel the impact of climate change. (Image courtesy of Moriaki Yasuhara, The University of Hong Kong)

Hunt and colleagues reached their conclusion by looking closely at the well-preserved fossil record of tiny deep sea ostracods (crustaceans) that lived in the North Atlantic during the last 20,000 years. In particular they examined how communities of these crustaceans responded to previous climate change events (periods known scientifically as the Younger Dryas, which occurred 12,900-11,700 years ago, and Heinrich 1, which occurred 17,000-14,600 years ago) during which the earth’s climate became rapidly cooler. This cooling interrupted the flow of cold currents from the North Atlantic Ocean down to the ocean bottom, causing the deepest parts of the ocean to become warmer.

“As these perturbations took place ostracod diversity on the ocean bottom increased and species composition changed,” Hunt explains. “More of some kinds of species appeared in the fossil record while there were fewer of other species.”

Hunt explains that basically population compositions changed in response to changing environmental conditions. When deep cold water warms, species normally restricted to shallower or warmer waters can extend their ranges downward. These animals could either have been going up or down in depth or shifting laterally, trying to find their preferred temperature and environment.

“One unusual aspect of this study is that it focuses on time scales of decades to centuries, which strangely enough, is the hardest time period to try to nail down because it is too long for human observation but too brief to resolve in the fossil record,” Hunt continues.The strong reliability of the fossil record from the ocean floor, however, allowed the team to study changes on this time scale. In shallow waters, waves mix the sediments of different ages together. In the deep ocean this effect is much less strong and a constant rain from above of little shells from algae and other small organisms continuously forms fine sediment, which is extremely well preserved year after year. Core samples taken from these sediments were used in the study.

“Given the record of what we see occurred in the past, it is likely that changes on the same scale and magnitude will occur in the future,” the researchers conclude in their paper. “Our results imply that future climate changes may involve abrupt reorganization of marine ecosystems and global diversity patterns.” –John Barrat