Santa Claus and his sleigh full of gifts has been upstaged early this holiday season by news of autonomous drones possibly delivering packages to your patio in the future. Amazon.com founder Jeff Bezos recently announced his company’s new project Amazon Prime Air. Its aim is to have a package delivered from an Amazon fulfillment center to your house just 30 minutes after you have ordered it online, carried by “unmanned aerial vehicles.”

“Putting Prime Air into commercial use will take some number of years,” according to the company, but its research and development lab is hard at work today to make it a reality. Smithsonian Science turned to Roger Connor, an expert on instruments and vertical flight at the Smithsonian’s National Air and Space Museum to ask him a few questions about autonomous drones and home package delivery. 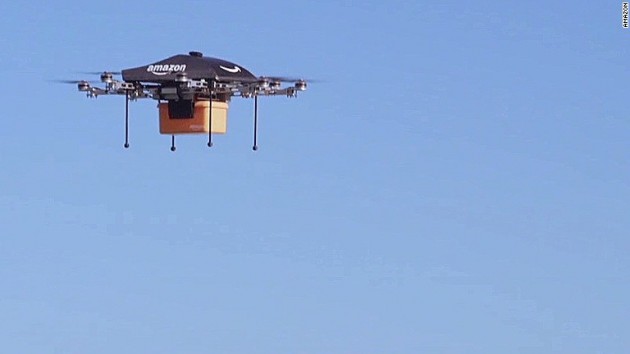 Q: What is your take on the idea of drones being used to make home deliveries of goods ordered on the Internet?

Connor: Well, the idea certainly has a Jetsons aspect to it. It’s got a “this is the future we were always promised but never got” feel.

For me it brings to mind the helicopter in the late 1940s when they first came on the market. Everybody was kind of pushing this notion that you would be able to commute from the suburbs in a personal helicopter that wouldn’t cost any more than the family car. We were going to have flying helicopter busses. At the time the government put a lot of money into supporting these ideas.

We do use helicopters commercially today but not for anything like the uses that were first proposed.

Q: So what are some of the challenges of developing drones that can deliver books and packages?

Connor: First, Bezos proposes using fully autonomous drones—aircraft that fly and navigate by themselves with some sort of artificial intelligence and GPS coordinates. These are not aircraft rigged up with radio control and flown remotely by a pilot on the ground.

One of the biggest hurdles for any such autonomous system is to make certain its drones are not going to get in the way of an airliner or other aircraft. To do this, a drone would first have to have what the industry calls a “sense and avoid” capability, allowing it to avoid other aircraft.

There are technologies that are now coming into play in the air traffic system that allow this but they are expensive and too large and heavy to put into any aircraft like we have seen proposed by Amazon. It would be a pretty significant technological advance alone to just make this aspect of the proposal viable. 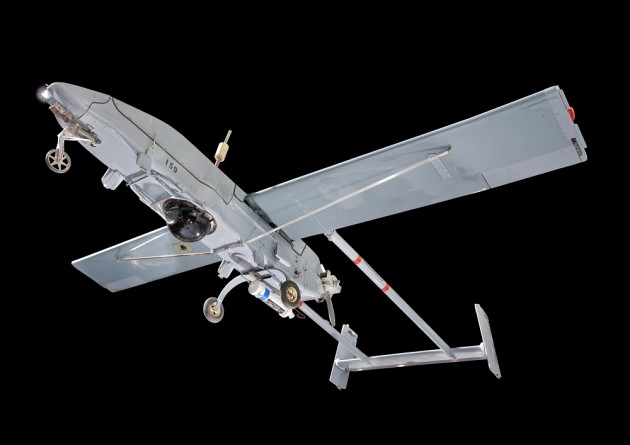 U.S. Army, Navy, and Marine units began using the RQ-2A drone, shown here, in the late 1980s to provide field commanders with real-time reconnaissance, surveillance, target acquisition, and battle damage information. Unlike an autonomous drone this drone was piloted by controllers on the ground with radio waves. This one in the National Air and Space Museum collection operated from the battleship Wisconsin during the 1991 Gulf War. (Photo by Eric Long)

Connor: Second, what’s really pie-in-the-sky about the Amazon idea is they are proposing to navigate autonomous drones in extremely challenging environments. So far the military has developed autonomous drones for combat use only in a prototype form. There’s one that the navy is using now that is designed to take off and land on aircraft carriers. But taking off and landing on a pitching carrier deck is really nothing compared with the idea of trying to navigate in a suburban environment with trees, and power lines and kites and geese and chimneys and all those other things that are going to cause problems.

Nobody has ever tried anything even approaching this in terms of the complexity of it. It is one thing to have Google Earth imagery and know that there is a house in a certain area and quite another thing to know exactly how tall a chimney is and if there’s a TV antenna sticking up or whatever.

To be able to do this you’d have to have something like a LIDAR [a remote sensing technology that measures distance by illuminating a target with a laser and analyzing the reflected light] system that would actually be able to see using some fairly sophisticated sensors. Those do exist but again they are expensive and pretty heavy.

So by the time you have added these two components you’re talking somewhere in the low hundreds of thousands of dollars worth of sophisticated equipment and you’ve upped it to a fairly significant weight level.

Even if you are trying to stay below some arbitrary threshold that the Federal Aviation Administration has set, let’s say 55 pounds or so, you also are going to need some sort of recovery system for liability reasons, some sort of little ballistic parachute, and of course that is more weight.

So there’s this really vicious spiral that you get into of weight and cost that makes it extremely difficult to carry out something like this.

People who are aware of drone technology at the moment look at this and really kind of scratch their heads. Practically speaking in the next five years there’s virtually no hope of doing anything along the lines of what Bezos is proposing here.

Not only is the legality of it going to be kind of far off in terms of trying to define the kinds of operations but also technically there is really just no hope for it at the moment. All the pieces necessary for it do exist in some form but putting those pieces together in a package that is small enough to do the task and do it affordably…that is what’s really the challenge here. It’s hard to see that existing in five years, it is hard to see it existing in 20 years.

Q: How are autonomous drones being used commercially today?

Connor: The Federal Aviation Administration has recently approved type certification for the first two unmanned aerial vehicles to operate commercially in the national airspace system. They are being used commercially by oil companies on the north shore of Alaska to spot wildlife, because these companies have an obligation in environmentally sensitive zones to locate what wildlife is moving through the area. Manned aircraft can also do this but they are expensive, noisy and are going to frighten the wildlife, so if you can do this with an unmanned system that’s a good way of doing that.

There’s also a pretty good market for autonomous drones in fighting forest fires by using thermal imagery to find hot spots and in agriculture to survey and do mapping for precision agriculture –putting down seed and fertilizer with GPS coordinates. Police applications are also a big one.

When you get beyond that trying to determine where this type of technology is going to pay off is really a much more open question.