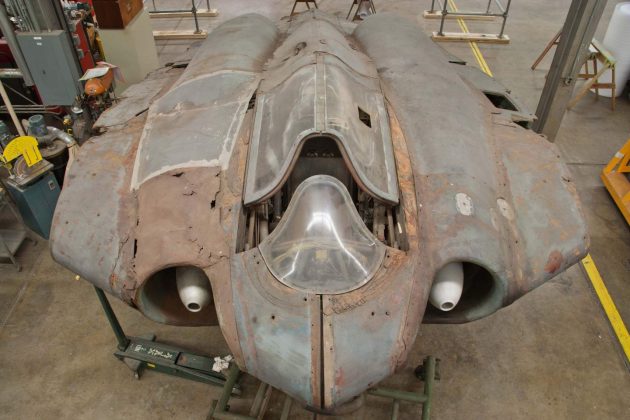 This overall view of the Horten Ho 229 highlights the heavily rusted intake fairing on the left. After examination of historical images, where this section was missing, it was discovered that the left intake fairings were added in a later restoration. (Photo by Ben Sullivan)

Toward the end of World War II, the Nazis—clearly losing and in distress—proposed a host of seemingly bizarre projects in an effort to turn the tide in their favor. One of these so-called German “wonder weapons” was the Horten Ho 229.

It’s the only remaining example of the world’s first all-wing jet aircraft, constructed in extreme haste by brothers Reimar and Walter Horten in 1944. 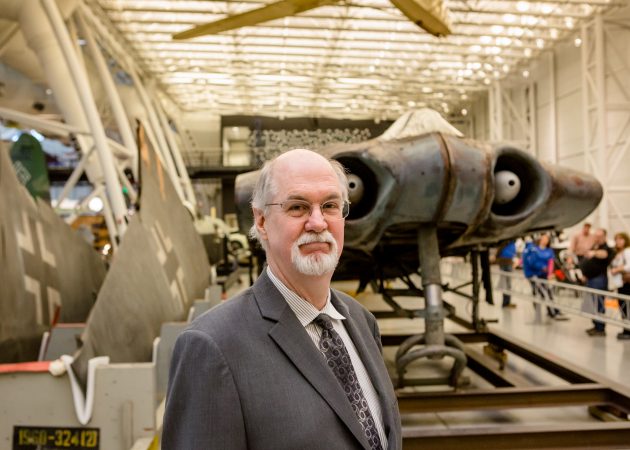 Russ Lee stands next to the Horten Ho 229 on the exhibition floor of the National Air and Space Museum’s Udvar-Hazy Center. (Image by Emily Schmitt)

Soon after the war, the U.S. military recovered the Horten Ho 229 V3’s center section—two jet engines, cockpit, landing gear and other parts—inside a road maintenance building in Germany. Its wing panels were found at a different location.

“They brought this aircraft and thousands of other pieces of equipment back from Germany and Japan after the war to study them,” says Russell Lee, chair of the Aeronautics Department at the National Air and Space Museum. “They wanted to find out secrets if it had any.”

More than 70 years after it was built, the Horten Ho 229 V3 is still giving up secrets, most recently to Lee and a team of Smithsonian conservators and treatment specialists who restored the aircraft from 2015 to 2017. 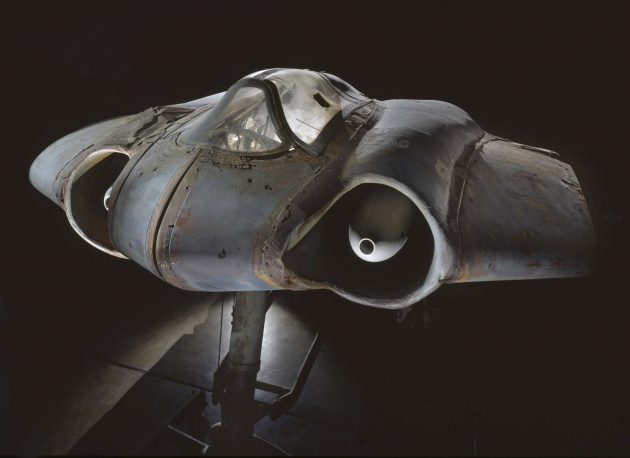 The Horten Ho 229 at the National Air and Space Museum’s Steven F. Udvar-Hazy Center. It is one of the most unusual combat aircraft tested during World War II.

Their work was cut out for them. Stored outdoors for decades, extreme temperature and humidity exacted a heavy toll on the plane’s layered plywood skin, metal components and other parts.

Conservators did a detailed study of the structure and conserved it where needed. They left it alone where there wasn’t any active corrosion, says Lee, who is the author of the book “Only the Wing: Reimar Horten’s Epic Quest to Stabilize and Control the All-Wing Aircraft.”

As a curator, Lee works in tandem with conservators and treatment specialists, collaborating to determine how to treat and restore and conserve every artifact.

Their mantra, according to Lee: “Leave stuff alone. Conserve it, stabilize it, but unless it’s absolutely necessary, don’t scrape off all that history and repaint it.” 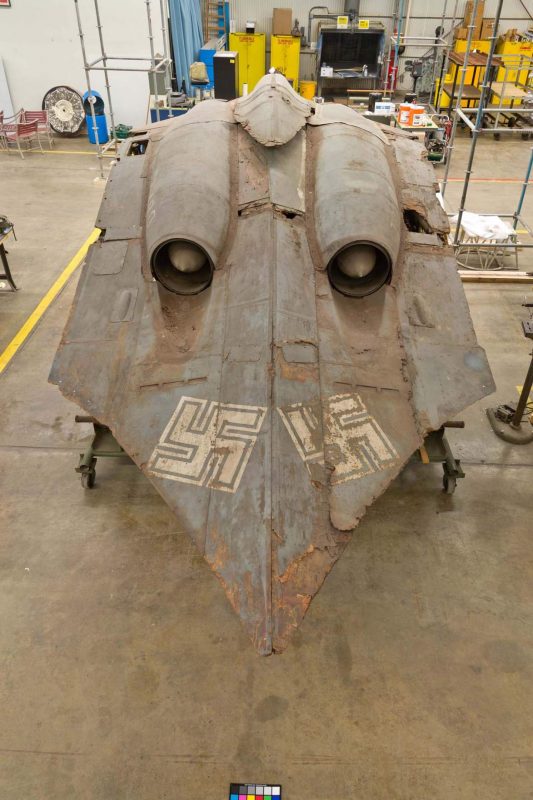 In 1942, the aircraft’s designers Reimar and Walter Horten began talking about a new all-wing fighter for Germany. Hermann Göring, chief of the German Air Force, gave his official permission to the brothers to build and test several prototypes the next year.

The aircraft on display at the museum is the third iteration of the Horten Ho 229 series. The first was a piloted glider, which informed the design and builds of the jet-propelled versions to come. The second crashed during a test flight, killing the pilot. Fourth, fifth and sixth prototypes were being developed as the war ended.

During their work, the museum’s conservation staff followed up on a story generated by Reimar Horten years after the war. He claimed the Horten Ho 229 was to be the world’s first stealth airplane, the result of a special exterior coating that contained charcoal, which would absorb radar waves. In a detailed examination of the Horten Ho 229’s layered plywood surface, Smithsonian conservators used an electron microscope and a variety of special devices, looking for any kind of coating. They didn’t find anything.

“As the conservators started to take the aircraft apart and study every component and assess whether there was any deterioration, they took off the belly panels underneath the engines,” Lee says. They found a little cutout where maybe some duct would have been, charred on both sides and also beneath both engines. 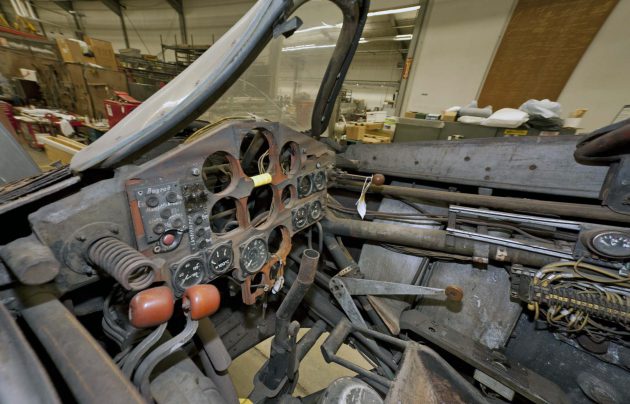 Cockpit and controls of the Horten Ho 229

“About all we can conclude is that at some point, and this was previously unknown, U.S. Army Air Force personnel must have actually started the engines and run them,” Lee says.

The Horten Ho 229 ultimately was a “dead end,” Lee points out, due to its limitations in lateral stability. It contributed nothing to the war.

“You could argue that it took away resources from the Germans,” Lee says. “They didn’t need pie-in-the-sky, outlandish stuff. They needed many examples of things that already worked.”

The Horten Ho 229 was one of the most unusual combat aircraft tested during World War II. It may not have been a “wonder weapon,” but it did mark the introduction by Reimar and Walter Horten of a noteworthy and longstanding concept: bell-shaped lift distribution. This concept is still being thoroughly studied and tested by aeronautics researchers.

By working on the Horten Ho 299, the Hortens kept themselves away from the most dangerous aspect of the German war effort. They were under a strict deadline to get their new plane into the air, and working on it kept the Hortens and their employees off of the front lines, where thousands of their countrymen were dying. 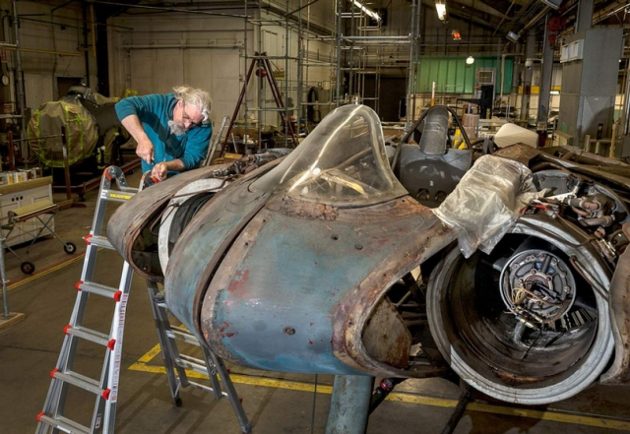 Aircraft mechanic Karl Heinzel stabilizes hardware on the leading edges of the Horten Ho 229 V3 during the aircraft’s conservation. (Photo by Eric Long)

“Nazi politicians didn’t know aircraft or aerospace, but if it looked cool and weird and they had a piece of paper that said it will go a thousand miles an hour and defeat the Allied bombers, they were going to support it,” Lee says. “So some of these designers stayed off the Eastern front, and they kept their whole crews and crews’ families protected by doing this.”

Lee found that some German scientists purposely sought to generate these new projects to stay off the front lines, a story he wouldn’t have known without working on the Horten Ho 229.

“No matter how long these artifacts have been here, and how long we’ve been looking at them, we’re still finding out new things about them,” Lee says. “We find out new questions to ask. I like to say we entertain with the truth. We’re always seeking the truth about the artifacts, and the stories we tease out are so entertaining and so interesting. They say so much about where we’ve been and where we are and where we’re going.”