Scientists at the Smithsonian Conservation Biology Institute’s Center for Conservation and Evolutionary Genetics have confirmed that the giant panda cub born at the National Zoo on Aug. 23 is a girl. A paternity analysis revealed that the Zoo’s panda Tian Tian is the cub’s father. Scientists also confirmed the second, stillborn cub Mei Xiang delivered on Aug. 24 was female and sired by Tian Tian as well. 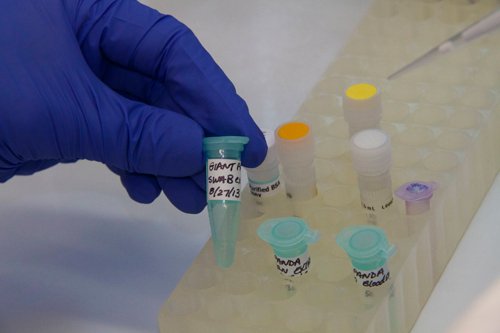 A small laboratory container holds extract from a cheek swab of the Zoo’s giant panda cub.

For the paternity tests they compared genotype profiles of DNA samples from the cubs to profiles from Mei Xiang, Tian Tian and the San Diego Zoo’s giant panda Gao Gao. SCBI’s Center for Conservation and Evolutionary Genetics had blood samples from Mei Xiang, Tian Tian and Gao Gao on hand. They compared a small sample of muscle tissue from the stillborn cub and a tiny sample of cheek cells from the cub born on August 23 to the adult male pandas’ DNA samples for the tests. Veterinarians obtained the cheek cell sample with a swab during a preliminary health check on August 25. 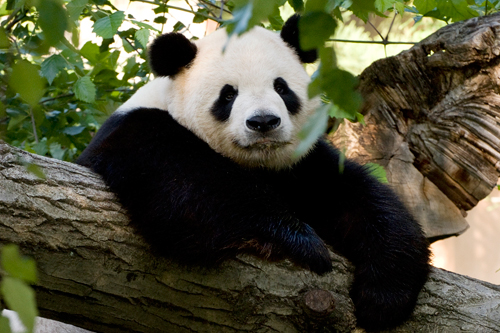 Tian-Tian, father of the new cub

“The genetics laboratory conducts conservation research and service for the Zoo and the entire Smithsonian, including sexing animals, determining paternity and disease testing,” said Rob Fleischer, head of the Center for Conservation and Evolutionary Genetics. “This was a great opportunity to assist our reproductive and panda biologist colleagues to assess their artificial insemination methods in pandas.”

“We had never artificially inseminated Mei Xiang with semen from two males before this past breeding season,” said Pierre Comizzoli, reproductive biologist at the Smithsonian Conservation Biology Institute. “If Gao Gao had been the father of one or both cubs, that would have been very interesting because we would have known that the second artificial insemination was the one that was successful.”   Source: The National Zoo

A clouded leopard cub, a Przewalski’s horse and a red panda cub were all recently born at the Smithsonian’s National Zoo