Mating season came earlier than expected this year for the giant pandas at the Smithsonian’s National Zoo. Female Mei Xiang (may-SHONG) went into estrus the first week of January, something that historically has occurred in March or April. She and male Tian Tian (tee-YEN tee-YEN) attempted to mate on Jan. 9, but were unsuccessful. Staff then made the decision to perform an artificial insemination that evening and again the next morning. 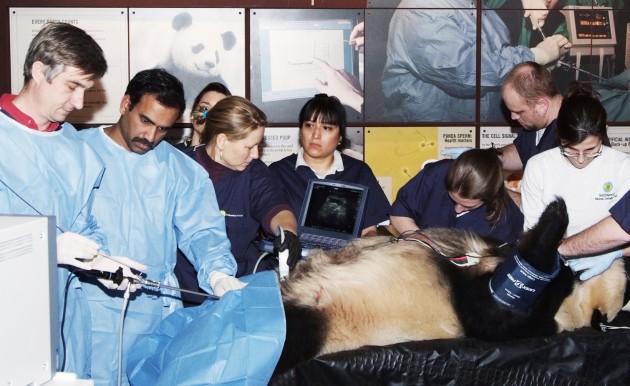 Photo: Staff from the National Zoological Park perform an artifical insemination on the giant panda Mei Xiang, anesthetized and laying on her back at lower center. (Photo by Mehgan Murphy)

Both pandas were anesthetized, allowing the scientists to collect semen from Tian Tian and insert it directly into Mei Xiang’s uterus. Timing was critical because female giant pandas ovulate only once a year. A short period of two to three days around ovulation is the only time she is able to conceive. Gestation typically lasts from 90 to 185 days. This range is due to a reproductive phenomenon known as “delayed implantation,” or the delay from the point of conception to the point of implantation in the uterine wall.

“We will begin monitoring Mei Xiang’s behavior, conducting regular ultrasound examinations and analyzing certain hormone levels in the coming months to help us determine if she is indeed pregnant,” said Suzan Murray, chief veterinarian at the National Zoo. “This can be challenging, however, because pandas can also experience a pseudopregnancy.” Female giant pandas undergo pseudopregnancies when they ovulate but fail to conceive.  During a pseudopregnancy, hormonal changes and behaviors are identical to a true pregnancy. 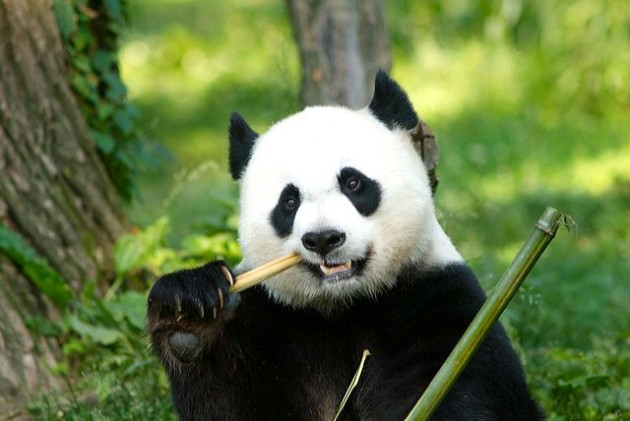 Both 11-year-old Mei Xiang and 12-year-old Tian Tian were born at the China Research and Conservation Center for the Giant Panda in Wolong, China. They came to the National Zoo in December 2000. Mei Xiang has had several pseudopregnancies since, but successfully gave birth to a male cub, Tai Shan (tie-SHON), on July 9, 2005.

The reproductive success of Mei Xiang and Tian Tian at the National Zoo is only a small part of the contributions to giant panda conservation being made by the Smithsonian. Scientists from the Institution have been working diligently in China since 1996, assisting Chinese colleagues in improving reproductive and health success of giant pandas in Chinese breeding centers and working in the field to help save the species in nature. 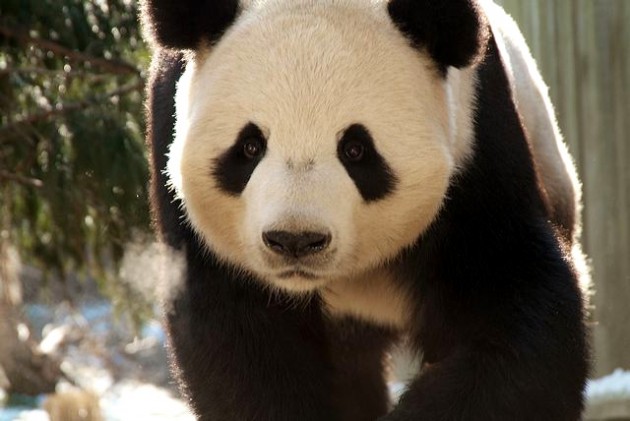 There are an estimated 1,600 giant pandas remaining in a few mountain ranges in central China, in Sichuan, Shaanxi, and Gansu provinces. They once lived in lowland areas, but farming, forest clearing, and other development now restrict giant pandas to the mountains. The species is listed as “endangered” by the International Union for Conservation of Nature and Natural Resources. —Johnny Gibbons